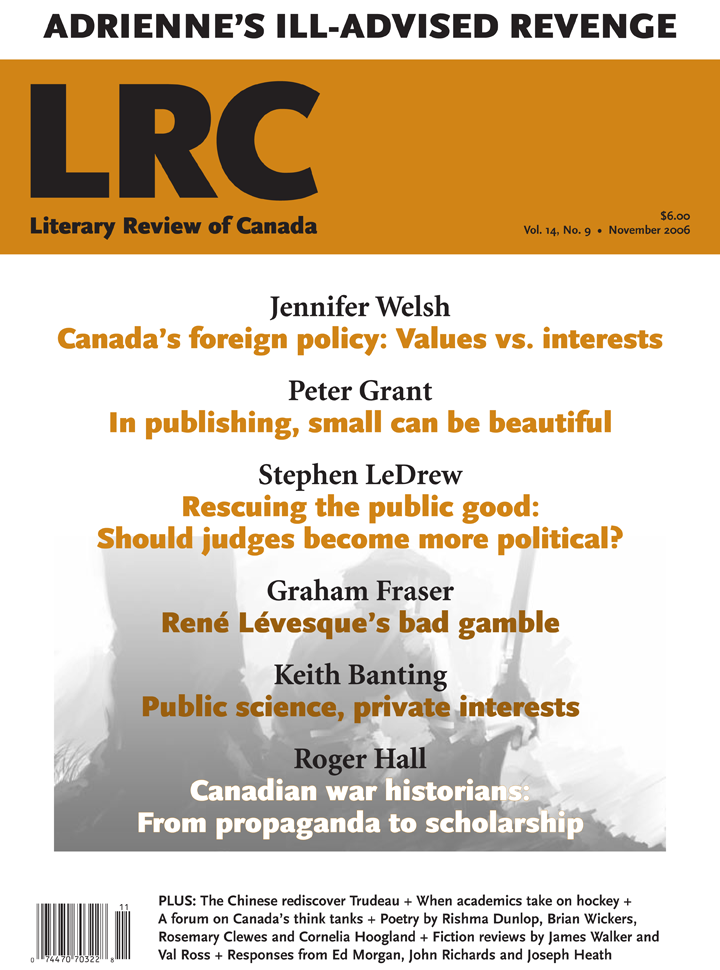 Re: “Is Small Beautiful?,” by Peter S. Grant

Peter S. Grant’s excellent excursion into the impact of “long-tail” retailing on book publishing shows that, for once, the economic weather has broken in favour of Canadian books. Grant rightly detects “heartening signs that the Internet could be helpful,” an argument I too make in a forthcoming updated edition of The Perilous Trade: Canadian Book Publishing 1946–2006.

Until recently, trade publishers relied almost exclusively on bookstores to sell their titles for them. Publishers, booksellers, libraries and readers have been the interdependent limbs of a single organism, of which authors represent the heart. When one part of the organism turns against the others, as the original incarnation of Chapters Inc. did in the late 1990s by preying on competitors and stiffing Canadian publishers, the result is self-mutilation. The casualties are still being counted.

Interdependence remains a crucial fact of life for the book trade, but the Internet has eased the suffocating form of co-dependency whereby, if bricks-and-mortar booksellers don’t stock and display a title, it dies from lack of oxygen. This is a bigger problem when one retail chain has a stranglehold on half the market. Now publishers, or for that matter authors, can promote and even sell their books directly through their websites. This new channel of communication scarcely supplants the bookseller’s key role, but adds another lifeline to make the trade a little less perilous.

Grant quotes Michael Tamblyn, the CEO of BookNet Canada, as saying that Canadian publishers must adapt their marketing strategies to take advantage of the opportunities offered by the Internet. This is already happening. In addition to the glossily attractive, multilayered websites of multinationals like Random House of Canada, smaller independent publishers are seizing the chance to build Internet communities for their books. Counterculture warriors of the 1960s and ’70s now do battle using monthly emailings and interactive websites featuring book excerpts, blogs, discussion materials for reading groups and discount offers. Consequently, book publishers begin to resemble magazine publishers, who have always to some degree circumvented the retail middleman by building relationships directly with their reader-subscribers. This is arguably a healthy, organic development.

Small is what I am, so I am easily seduced by Peter Grant’s hopeful thesis that small may be beautiful in the context of Canadian book publishing. I wonder, though, about the tense of the verb “emerged” as it appears in the first sentence of Mr. Grant’s essay: “Five years ago, Canadian book publishers emerged from a horror story.”

My understanding is that the experience of The Porcupine’s Quill in the collapse of General Distribution was not uncommon. Elke and I lost a total of $65,000. The financial tsunami was cushioned with an $8,000 loan from Heritage Canada, which will be clawed back at the rate of $1,500 a year until the spring of 2008. The $65,000, of course, will not be recovered. And Chapters’ returns in our most recent fiscal year have ballooned to 135 percent of sales. And so the horror continues, unabated.

I wonder, as well, at Peter Grant’s claim that “an Internet bookseller can list and sell millions of different titles.”

Listing basic bibliographic information with the e-tailers is not particularly challenging. Adding jpeg images of the covers to the basic listings is tedious because most of the aggregators have different specifications for cover images. But the real issue in attempting to sell (rather than simply list) books online is availability. Books that sell online must be available for shipment within 24 hours, which means the books must (albeit in limited quantities) be physically present in some key warehouses. To get the books into those warehouses, of course, costs money.

Amazon.com is probably the most receptive to small press titles, with their Advantage program, which insists on 55 percent discounts and requires publishers to prepay freight to Lexington, Kentucky, and pays publishers on an inventory consignment basis. The “advantage” to the Advantage program is that publishers can directly affect the availability status of their titles. Chapters.indigo.ca, on the other hand, prefers to source books from Ingram in LaVergne, Tennessee, which does not accept small press titles on consignment. This means that most PQL titles listed on chapters.indigo.ca show as available in three to five weeks, which is close to useless.

I notice that Ingram now charges a $50 title fee to list new releases on Ipage. And Baker+Taylor wants $600 a year to provide access to TitleSource, so that I can then, at my expense, review and enhance my data on their machines, to their corporate benefit. Bowker offers similar paid access to globalbooksinprint.com.

It is not difficult to see where this sort of corporate gatekeeping could be headed, any more than it is difficult to understand why Kellogg’s Corn Flakes are positioned at eye level in supermarket aisles.

One possible remedy for the smallest of publishers may be Abebooks, on which a publisher can set up as a bookseller and sell directly to the public, and we do just that, but so far PQL sales on Abebooks do not come up to matching the $25-­a-­month title listing fee.

Re: “Last Bastion of Dirigisme?,” by Keith Banting

Forty years ago one of the slogans making the rounds at the University of Toronto where I was an undergraduate was “Who does the university serve?” In 2006, the question is still being asked in the context of whether the profit motive fits with the university’s mission. Translating ideas into practical benefits for society is not something to be spurned but what happens when those ideas are sold to the highest bidder? Keith Banting’s review of Public Science, Private Interests: Culture and Commerce in Canada’s Networks of Centres of Excellence acknowledges that the neo-liberal agenda was part of the rationale for the establishment of the Centres of Excellence but divorces that from the doctrine that “technological innovation, making knowledge accumulation and transmission” among the “central concerns of modern industrial policy.”

If they are central concerns how did they get that way? Who pushes, and benefits most, from the ideas that, according to Banting, are the main focus of modern society? Let me demonstrate with the area that I know best—pharmaceutical policy. The pharmaceutical industry is very successful at bringing new drugs to market but it relies heavily on publicly funded basic research to identify promising new leads. In fact, after taking into account tax credits for doing research, we find that only about one to two cents out of each sales dollar go to basic research. It’s in the best interests of the drug companies to make sure that they have close ties with academia, and the industry has worked hard to ensure that these relationships are strengthened.

In the United States the Bayh-Dole Act of 1980 was a key element in translating knowledge into commercialized products by allowing academic scientists to retain patent rights on inventions that they developed from federal funding. The pharmaceutical industry helped lobby for this act and has profited enormously from it. Taxol (paclitaxel), which by 2001 had become the bestselling cancer drug in history, was developed almost entirely by the publicly funded National Institutes of Health and then licensed exclusively to the pharmaceutical giant Bristol-­Myers Squibb.

But the industry has done more than just be the recipient of new drugs. It has helped shape the academic biomedical agenda. There are justifiable fears that the money from industry to university scientists is biasing the types of questions that are asked in favour of those that will ultimately lead to patentable products. Faculty members who are funded by industry are more likely to refuse to share research results than those who are not recipients of industry largesse.

Research results unfavourable to industry may be suppressed—witness what happened to Dr. Nancy Olivieri, and her story is far from an isolated event. Finally, even when results are published, if the research has been sponsored by industry it is consistently more likely to be favourable to the product being studied than if funding came from any other source. The end result is that our knowledge of how well drugs work may be seriously distorted because of the source of money to study them. Technological innovation, knowledge accumulation and transmission have been key to keeping the pharmaceutical industry at or near the top of the profit heap; at the same time only about 10 percent of new drugs are therapeutic advances of any significance. We can’t understand the forces behind industry-­academic intertwining without knowing who benefits the most from the relationship.

Re: “The Erosion of Public Goods,” by Stephen LeDrew

I am grateful for Stephen LeDrew’s review of my Good Government? Good Citizens?. He suggests that “practicing politicians and public policy commentators will do well to read this book … It is [one] that will be looked back on ten years from now as a bellwether.”

Nevertheless, Mr. LeDrew has mischaracterized the book in an important way. The review can leave the impression that I place great faith in the law and the judiciary in ensuring the “good public goods” that I see as so essential to a vibrant civic society. He has got me right about the essential role of good public goods (and the extravagant claims on behalf of the market to be the supplier and sorter of all) but he’s wrong about how I view law and judges. Good Government? Good Citizens? is a cautionary tale regarding optimistic accounts of the capacity of law and of the judiciary to (re)mould society—no matter what ideology is on offer. True, at the very end of the book I do plead with judges, as citizens, to use the trust that the public reposes in them to underscore the critical importance of representative politics to civic society. But I do this to emphasize the limits of judicial power, not to promote fantasies about the capacity of courts to bring about progressive change. The forces against a vibrant civic society are growing ever stronger. No matter what their role, all those who believe in good public goods need to say so: loudly, clearly, immediately.