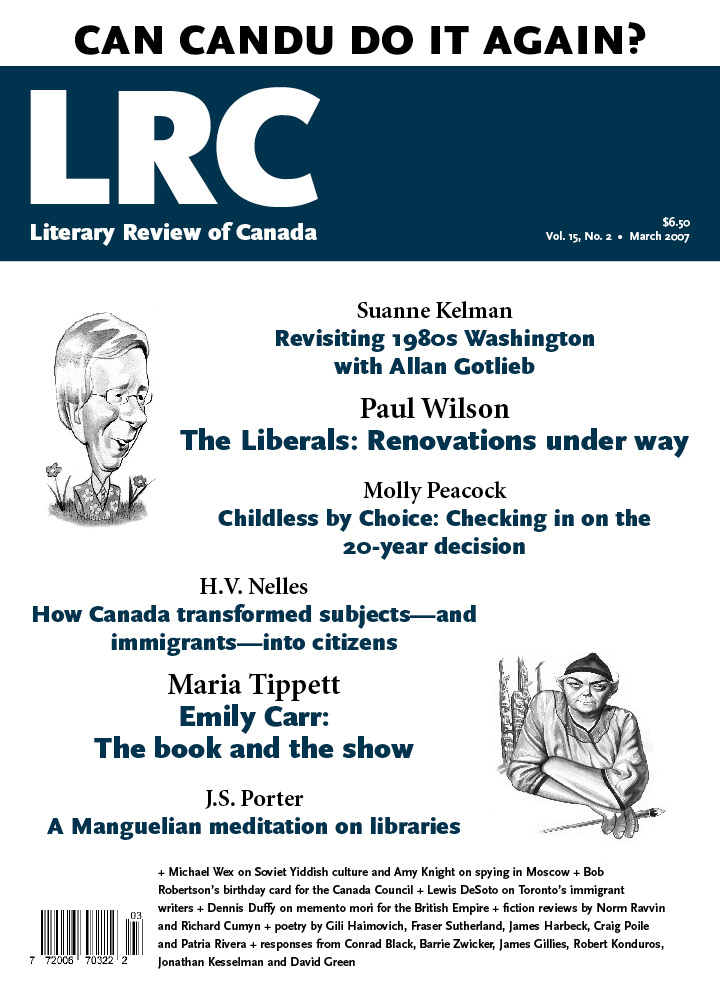 Re: “Still Controversial, Sixty Years On,” by Maria Tippett

To avoid “looking at historical events through today’s lens” is to relegate these events to the past, saying they have no role in the present. Carr’s art lives and has had transforming meanings during and after her lifetime, which we set out to explore in Emily Carr: New Perspectives on a Canadian Icon. The challenge for the authors and organizers of the exhibition was to look at Carr through new lenses—to analyze how others have presented Carr and how she presented herself in her art and writings.

The authors have taken varying approaches in novel and thoughtful essays, some within a contemporary context, others more historical. All did original research and I must point out that it was Susan Crean who published Carr’s unpublished manuscripts in Opposite Contraries: The Unknown Journals of Emily Carr and Other Writings (Douglas and McIntyre, 2003). Andrew Hunter takes a unique look at Carr’s forest paintings within the context of the logging industry and clearly demonstrates that Carr’s strength lies in her very ability to fill “banal” subjects, logged-over sections or a few bushes by a path in a Victoria park, with the remarkable energy that animated her vision of nature. Marcia Crosby’s study of Carr’s visit to Kitwancool (Gitanyow) queries the difference between the roles of history and common and shared memory, both Carr’s and First Nations’. The essay isn’t about creating a more accurate history of an event. It is about writing a history that necessarily integrates the contingent “truths” of the historian’s narrative and (one’s) memory. Johanne Lamoureux studies aspects of Carr’s modernism in light of two definers of French modernism, Pablo Picasso and Henri Matisse, of whom Carr’s teachers were followers. Jay Stewart and Peter Macnair question Carr’s account of her trip to Alaska in 1907, the year she claimed to have been converted to her mission to depict a “disappearing art,” a mission not initiated in Victoria in the 1890s or in 1898 at Ucluelet. My study of the 1927 Exhibition of Canadian West Coast Art Native and Modern set out to see how Carr fit into the overall selection of First Nations and non-Native art within the context of Marius Barbeau’s ideas, both as an anthropologist and author. We had no “political agenda” to affirm First Nations art as more accomplished, but I am interested that this is Tippett’s perception through the lens of today. I can affirm that all the works in the exhibition were selected for their quality and function in trying to shed new light on Carr, whose early caricatures are infinitely more amusing and powerful than those she produced in 1917 to earn money. The ability to bring differing viewpoints to Carr’s life and art only reinforces the continuing vitality and importance of her contribution to the larger story of Canadian culture.

Re: “Front-Row Seat in Moscow,” by Amy Knight

Amy Knight concludes her review of A Spy’s Wife with the lament that Russia’s happy days ended with Boris Yeltsin’s retirement and that a dark era has ensued under Vladimir Putin. In this lament she joins a quite vocal group of Russophobes who consistently focus on the negative aspects of the Russian transformation from communism. Undoubtedly, there are visible problems in Russia, such as corruption, an aging population, the state of health of society (including an HIV epidemic and alcoholism), criminalization of youth and the growth of radical nationalism. However, to describe Vladimir Putin as a “Soviet-style dictator” and Russia as a country that has “lost its chance” is, at the minimum, a misinterpretation and, at the maximum, a falsification of the reality of modern Russia.

Let’s briefly remind ourselves about the inheritance Yeltsin left to Putin. In the 1990s Russia suffered the biggest transformational recession in Eastern Europe. Neither the First World War and the revolution of 1917 nor the horrors of the Second World War brought about such a dramatic drop in economic output as was seen in the 1990s. In 1998, at the lowest point of the 1990s recession, Russia’s gross domestic product was 55 percent of the pre-crisis peak of 1989. In the 1990s, consumption decreased on average by about 33 percent. The shadow economy, which some estimates place at 10 percent to 15 percent of GDP during the final years of communism, grew to approximately 50 percent of GDP by the mid 1990s. In 1996, Russia came in 48th of 54 countries on Transparency International’s corruption index. Simultaneously, in the 1990s, more than a quarter of the Russian population lived at the level of absolute poverty and state institutions reached a peak of ineffectiveness bordering on dissolution of the state.

When Putin became president, he had to face all of the above problems. I argue that his actions cannot be evaluated outside the context of the collapse and chaos of the 1990s. The facts are that for the last eight straight years Russia has experienced an average annual economic growth of 7 percent (three times the rate of the European Union). It has become the world’s largest exporter of gas and second largest oil exporter after Saudi Arabia. Russia has eliminated its huge external debt and become an exporter of capital. Construction is booming. Salaries have been growing at a rate of more than 10 percent a year and consumption rose 12.5 percent last year. The crime rate, while still high, has started to decrease. Russians are free to go anywhere and say anything they want. They have also an important freedom: to buy what they want with their increased salaries. The printed media is mostly free to express its views. Granted, this picture is obviously distorted by the Kremlin’s heavy-handed influence over television and the dramatic rate of murder (the highest after Iraq) of investigative journalists in Russia.

Most Russians credit Vladimir Putin with bringing about these changes. His approval rating often surpasses 80 percent in public opinion polls, making Russian domestic optimism the exact opposite of western pessimism about Russia. It is fair to say that few Russians would claim that the Kremlin offers them full-fledged democracy. Nor would they agree, however, as Knight claims, that they experienced “heady freedoms … in the Yeltsin era” (who was, by the way, the only president I know of who ordered tanks to shell his legally elected parliament).

So I would argue that the glass is half full rather than virtually empty. The point is that to sustain the democratic process in Russia—which we all hope for—would be impossible without many of the measures taken by Putin, taking into account the scale of state and societal collapse under Boris Yeltsin in the 1990s.