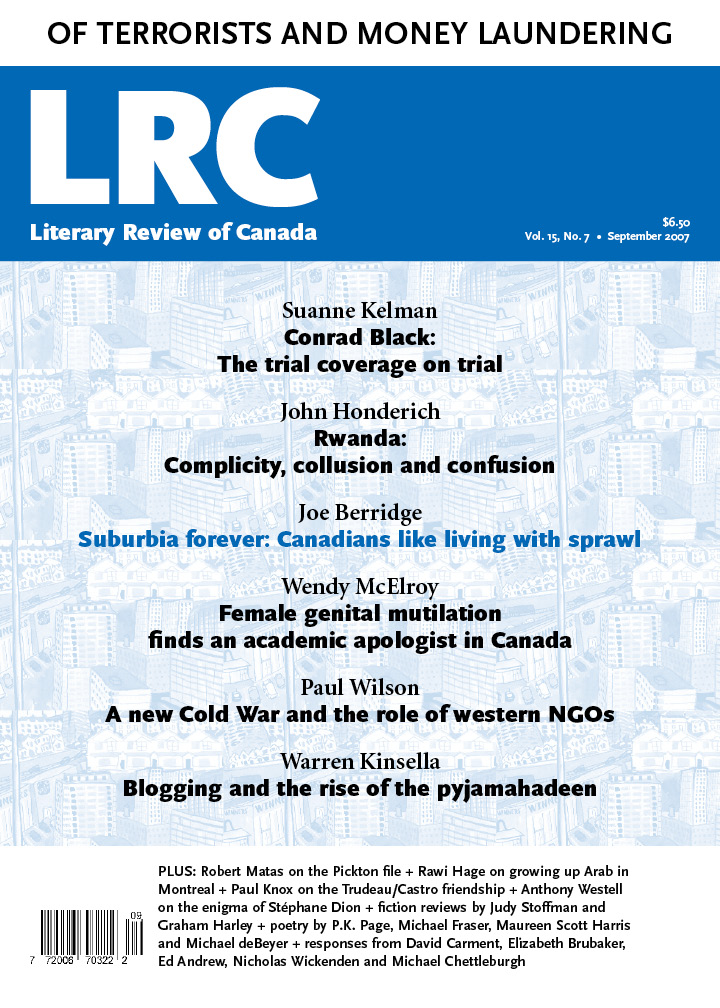 Re: “The Rise of the Pyjamahadeen,” by Warren Kinsella

Re “The Rise of the Pyjamahadeen,” by Warren Kinsella (September 2007), quite frankly, what I found disquieting about Kinsella’s review were not the profanities, understandable in light of his adolescent approach to a study of blogosphere as a personal threat, but his striking lack of intellectual integrity, as if the LRC has been designated as the next pillar of the “anarchic, leaderless, disputatious media community,” better known as “citizen media.”

Blogosphere: The New Political Arena analyzes the online diaries of an Iranian girl seeking self-expression, an Israeli woman in search of politi- cal sanity, a Canadian baby boomer, an Indian mother of a schizophrenic child, an African exile writing on war, hunger and misery, and four Americans (a web designer, a feminist blogger, a playwright and a soldier on a war ship in Iraq). The analysis of these diaries is used to draw preliminary hypotheses on the new emancipation provided by the internet, which allows individuals of no former repute to publish their autobiographies. It shows how these individuals assert this freedom and become part of a new political reality in which private concerns play an increasing role in the public domain. It argues that this new emancipation cannot be simply defined as a restoration of an Aristotelian civil society, i.e., a community of autonomous citizens engaged in a rational exchange of ideas within a framework of social obligation and political responsibility, because of the lack of discursive boundaries in cyberspace. Drawing on Richard Sennett, Charles Taylor and others, the book warns of the illusion that solipsistic talk entails political freedom and shows how political parties, marketing agencies and lately populist media commentators are capitalizing on this illusion by promising individuals in genuine need of self-expression “the third great communication revolution.”

What is so disquieting about Kinsella’s polemic, which ignores the above ideas while attributing to the book bizarre claims it never made, is that it appears in a literary review demanding certain intellectual rules and constraints, such as careful reading of a book one comments on, unless, of course, these rules and constraints, a product of the “Ice Age,” are also expected to succumb to the “new citizen media.”

Re: “Help or Interference?,” by Paul Wilson

Not having read Mark MacKinnon’s The New Cold War: Revolutions, Rigged Elections and Pipeline Politics, I can only comment on Paul Wilson’s review of it (“Help or Interference?,” September 2007). Wilson says “the desire for change … was not something cooked up in Washington: it was already there” and this is the most important point. Democratic or institutional development will only result from groups and even individuals who want change, recognize it is possible, and are prepared to make the commitment and sacrifice to make it happen. As well there must be a society that is anxious or at least prepared to change how it governs itself. Having real elections, a free media, honest judges and cops, a working legislature, human rights and freedom of speech are seen by most as a measure of democracy, but for established powers and elites they are a threat.

For eleven years I worked for a leading American democratic development non-governmental organization, the National Democratic Institute, most often funded by the U.S. government. I worked for NDI in nine of the republics of the former Soviet Union, the Balkans, Africa, the Middle East and Afghanistan. Never once was I told or asked to promote any agenda other than supporting activists who wanted to create a better society through the creation of viable institutions that reflect the basic principle of human rights and democracy. Never once did my agenda differ from those of my partners except perhaps in those same parameters. I won’t say it does not happen but it is very much the exception, not the rule.

When I wrote this book, I knew that along with the good ones, there would be reviews like Paul Wilson’s.

The New Cold War, I believe, ruffles some feathers because it challenges the perception that the people of Eastern Europe and the former Soviet Union are captives waiting for the good guys in America and the West to free them. While that may have been true at the end of the first Cold War, the people who live in Russia and the other former republics of the old USSR now have far more complex feelings about “freedom,” “democracy” and the West having lived through the chaos and economic deprivation of the 1990s.

In writing this I sought to look beyond the media coverage of the time (including my own) and to examine why the seemingly spontaneous uprisings on the streets of Belgrade, Tbilisi and Kiev were at the same time so smoothly orchestrated, well funded and incredibly similar to each other.

The intent of my book is not to take anything away from the brave people who stood on the streets in Ukraine—or any of the revolutions before that, including the 1989 Velvet Revolution in the former Czechoslovakia—but to try to plot these events on the grand chessboard that policy makers on both sides play on.

Why did the Bush administration suddenly decide that Georgia’s 2003 parliamentary election was of such importance? Why didn’t the same concern exist when U.S.-friendly regimes openly rigged votes in the nearby former Soviet republics of Azerbaijan and Kazakhstan? Were American-backed NGOs really interested in furthering democracy or in promoting candidates and parties with a specific, pro-U.S. worldview? The answers don’t always fit the America-good, Russia-bad paradigm that Mr. Wilson apparently subscribes to.

That said, this is not a book the Kremlin will like either. It is as much a lament for the dangerous slide Russia has taken under Putin as it is an investigation of what American-funded NGOs are up to in the region. I’m no fan of Putin or Putinism, although I probably wouldn’t go as far as to compare Russia now to Germany in the 1930s as the evidence doesn’t yet support such hyperbole.

The New Cold War is the story of how we lost the hope and trust that existed in the early 1990s and how we got to now, with the Kremlin and the White House each looking at the other as a nuclear-armed adversary again.

Re: “Suburbia Forever,” by Joe Berridge

There’s a growing body of academic writing that suggests sprawl isn’t all that bad, and in fact maybe a good and necessary thing. Joe Berridge’s review of William Bogart’s book Don’t Call It Sprawl: Metropolitan Structure in the 21st Century could just as easily have been a review of Robert Bruegmann’s Sprawl: A Compact History, since both argue confidently the same inevitability of low-density single-use development on the city fringe (“Suburbia Forever,” September 2007).

While he doesn’t use the information to challenge Bogart’s arguments, Berridge does refer to the fact that densities in Canadian cities are double those in America: all sprawl is not the same. And he admits that the Toronto urban area is a “different and, frankly, better city form” than can be found south of the border: sprawl is certainly not an inevitable modernism as his review implies. As for the high cost of building and maintaining the infrastructure needed for low-density development—well, it doesn’t get men- tioned very often by those who justify sprawl as an expression of personal freedom largely funded by the public bodies those cheerleaders despise.

The Ontario government’s plan for the Greater Toronto Area, Places to Grow — Better Places, Brighter Future: Growth Plan for the Greater Golden Horseshoe may seem like a reasonable strategy to restrain sprawl for Berridge and others, but as Tony Coombes of the Neptis Foundation has pointed out, the plan assumes that sprawl as we know it will be able to continue in the Greater Toronto Area for about 25 years, and the densification targets it sets are ones that most municipalities have exceeded for the past decade. As Coombes says, the targets are “unambitious.”

Why has Toronto done better than American cities—although clearly not enough—at restraining sprawl? How can those positive factors be strengthened and enhanced to produce a more efficient and productive urban form? Those are the key questions that need to be answered rather than our either pretending there’s no problem or patting ourselves on the back for the limited progress that has been made.