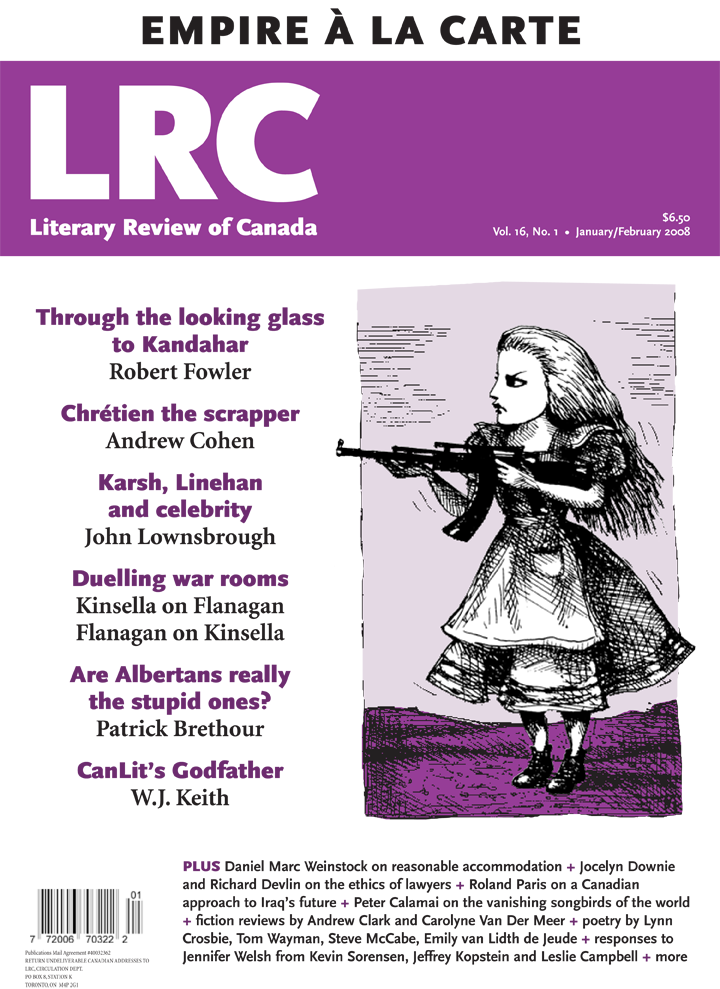 Re: “Who’s Stupid?,” by Patrick Brethour

Patrick Brethour isn’t the first, and I’m sure won’t be the last, reviewer to question my right to comment on Alberta simply because I live in Quebec. I can only imagine his disdain had he known that I am not only a Montrealer but also an immigrant who grew up in Ontario. Putting that aside, the heart of the matter is Brethour’s worship of the free market, which is largely responsible for the environmental and economic catastrophe that is gradually levelling Alberta. This clinging to a barren 19th-century capitalist dogma as the saviour that will lead us out of the wilderness dangerously delays action. Yet Brethour exalts this fanciful notion of the free market as policy. Trouble is the free market has nothing to do with the well-being of the commonwealth of the planet. Markets have one purpose: to chase money. If they have to strip forests, dig up whole provinces, contaminate fresh water, poison the air and destroy the earth, so be it. Unless they are checked. The tale of the free marketer is a gritty and edgy narrative. Not well woven. Not a smooth novel or a Renaissance painting. But a messy episodic mosaic of crazy-eyed men bent on nuking the earth, if that’s what it takes. And when free market acolytes feel their temple of George Bush is under siege, they accuse the apostates with the worst sin of all: “anti-Americanism.” Then they dismiss their complaints as “charmless” and their voices as “marginal.” I guess my interview with Syncrude president Jim Carter was an inconvenience to be ignored. Just as the reference to energy companies not paying income taxes was not my assessment but a quote from a Fort McMurray tax collector angry that energy companies don’t pay their fair share. But distortion is part of the armoury of the embattled faithful. Never mind that Albertans are destroying the land beneath their feet and the water they drink, and hugely intensifying greenhouse gas emissions to feed the American gluttony. Never mind that most of the profits flow to foreigners. Never mind that what’s left over is consumed in an inflationary feeding frenzy. None of that matters as long as men of power dominate. Is this Stupid to the Last Drop? Yes. Are the smart men of business that partake in this rape stupid? Yes. Are the politicians who allow it to happen stupid? Yes. Are those who re-elect them over and over again stupid? Yes. They all may benefit now, but what of the estate they eventually will bequeath to the next generation in this finite world? It is small comfort to think that some day proud Albertans will have to swallow the bitter pill of culpability. But it won’t happen. For the simple reason that Alberta will be as empty as the East Coast fishery, as barren as Quebec’s Boreal forest and as stripped as the Prairie grasslands. All of these disasters, by the way, are mentioned in my book. Alberta as metaphor. We are all willing players.

When we started the Salon Speakers Series at Grano restaurant, our intention was to invite to Toronto thinkers whose ideas may have influenced American foreign policy, whether we agreed with them or not. Reading Raymond Conlogue’s review (“Empire à la Carte,” January/February 2008) of American Power—transcriptions of the first eight talks—I suspect he judged the essays more by who gave them than by what the authors actually said. Readers will discover the book isn’t the apologia for hegemonic thinking the reviewer claims.

Conlogue accuses William Kristol, editor of the influential Weekly Standard magazine, of having no idea where terrorism comes from. What Kristol does say is that America was careless about terrorism in the 1990s, which led to problems down the road. But that was only a small part of his talk.

Conlogue’s attack on Robert Kaplan, an instructor at the Naval Academy in Annapolis and senior writer for the Atlantic Monthly, was also distorted. Kaplan reminds us that most of the U.S. military forces around the world aren’t engaged in combat, but in humanitarian and disaster relief. Just ask the thousands of grateful Indonesians after the 2004 tsunami.

But to accuse Fouad Ajami, the Middle East scholar at Johns Hopkins University, of being a “nominal” Muslim not interested in a serious analysis of Islam is bizarre. To Conlogue’s mind, a serious scholar of Islam is Tariq Ramadan, “who has shown that European Islam is rapidly liberalizing.” That’s just willful ignorance. Let me suggest Bruce Bower’s While Europe Slept: How Radical Islam is Destroying the West from Within as a starter. And for all of Ramadan’s enigmatic and slippery writings about Islam and its peaceful intentions, he refuses to condemn, unequivocally, the Islamic code known as huddud, or the stoning of adulterers.

The essays by Samuel Huntington, historian John Lukacs and Michael Ignatieff meet with more approval, though Conlogue can’t resist taking a swipe at Ignatieff, accusing him of “liberal imperialism,” whatever that means. He criticizes Christopher Hitchens for despising the regime of Saddam Hussein and the clerics of Iran as if one should choose.

I assume Conlogue never approves of foreign intervention anywhere, anytime, especially if it’s American intervention. Taking that attitude overlooks a lot of evil in the world. Whether for or against the war in Iraq, let’s remember the U.S. unearthed over 240 mass graves. When Europe finally decided to intervene to stop the slaughter in the Balkans, they left it to the Americans to do the heavy lifting. When Rwandans begged for help, no one came. And we’re still waiting for someone to save Darfur.

A final criticism of the book is that most of the Grano speakers were American. Conlogue suggests a list of his own thinkers we might invite; ironically, all, with the exception of Charles Taylor, are American. Chacun à son gout. If we took his advice, it wouldn’t be our series, it would be his. But if invited, I’d gladly attend.