Outside the Wire: the War in Afghanistan in the Words of Its Participants

Fifteen Days: Stories of Bravery, Friendship, Life and Death from Inside the New Canadian Army

On Assignment in Afghanistan: Maritimers at War

Contact Charlie: The Canadian Army, the Taliban and the Battle That Saved Afghanistan

“Afghanistan has been a tortured country for longer than any of us has been paying attention. Now that our own injuries have caught our attention, it becomes clear that if we can help pull the country out of the abyss, we must. And, equally, if we can’t help, we mustn’t make things even worse.

The right thing has to be done in Afghanistan. Whatever that is.”

Canadian troops have been fighting in Kandahar for almost three years and will be there for at least two more. Yet when that ends, as Prime Minister Stephen Harper says it will in 2011, we may be no closer to resolving the dilemma posed in the introduction to Outside the Wire: The War in Afghanistan in the Words of Its Participants, Kevin Patterson and Jane Warren’s collection of writings and reflections from Canadian soldiers and civilians who have served in Afghanistan. What is the right thing to do?

That dilemma is the subtext that runs through all the books discussed in this review, which look from the ground up at the Canadian military in action in Kandahar in the period from early 2006 through to mid 2007. In that time, three different six-month rotations of Canadian troops came through the region, and they were all trailed by journalists. Those journalists were producing history on the run—daily accounts of what happened on the ground for news outlets back home. A few have now translated those accounts into something more permanent, placing what has happened into a broader context that profiles the Canadian military in the 21st century. To varying degrees each book is based on embedding journalists with units of the Canadian Forces or relies on the words and writings of the soldiers themselves as well as other Canadians in Afghanistan in ancillary roles supporting the troops.

Leave aside the hand-wringing of those who worry that embedding reporters with the military produces captives who simply parrot the military line on the mission. It is certainly true that when you rely on others to risk their lives—even to die— protecting you, you develop a degree of respect and admiration for them and what they do. That is understandable.

It is also true that embedding produces a limited perspective on a conflict because it reflects mainly a soldier’s-eye view of the world. In Afghanistan, that means reporters cannot tell the equally important story of how the actions of Canadian and other troops affect Afghans. The technique provides only a very narrow view of a battle or a war, but as long as readers, listeners and viewers understand that, it plays a crucial role in trying to convey what is taking place in Afghanistan and what happens to those we sent there to fight, whom we will have to support once they return. Embedding reporters with the troops provides a window on the military, the people in it and their families that the media and Canada in general have ignored for much of the past half century.

Embedding also encourages the military to try to shape information to its advantage, even though there is no broad censorship beyond restrictions on reporting deaths and injuries until families have been notified and a ban on revealing operational issues (for which there appears to be no common or consistent military interpretation). In fact, more often than not, the military shortchanges itself by refusing to provide reporters with details of engagements with the Taliban or the roles of individual soldiers in those battles, precisely the details that turn dry incident reports into compelling stories. What emerges from this collection of books is a profile of a war unlike any Canada has fought before, and not just because it is a counter-insurgency and not a traditional war against another nation’s army with the objective of advancing and taking territory that will ultimately lead to victory. Soldiers in Afghanistan regularly travel and fight in temperatures of above 40°C, weighed down by body armour that on many occasions has helped save lives. Sand and dust are everywhere. The enemy is there one minute and gone the next, melting away from a firefight or ambush into Panjwayi irrigation ditches, poppy and grape fields, or the communities scattered throughout the region that Canadian troops patrol. That means the Canadians operate under the belief they are being watched all the time and are never sure who is a villager or farmer and who is an informant for the Taliban, regularly reporting the movement and location of Canadian troops. As a fighting force, the Taliban are respected by the Canadians for their tactics and strategy, so much so that some Canadian commanders have spent time learning the history of warfare in the Kandahar region. They discover the Taliban travel by the same routes and use the same ambush sites as were used successfully by the mujahedeen in their battle against the Soviets in the 1980s.

Unlike the early days of Canada’s involvement in Afghanistan, Canadian soldiers now have modern equipment, and the result is a very effective hightech fighting force designed specifically to combat counter-insurgency. They have everything from tanks to artillery to airborne drones to vehicles designed to withstand roadside bombs to the ability to call in supporting air strikes and medical evacuations when needed. In what should be a mismatch, they battle an enemy that drags its wounded and dead away from fights by hand and that relies on the primitive weapons of guerilla fighters everywhere—rocket- propelled grenades, AK-47 rifles, land mines and, their most effective weapon, improvised explosive devices. The IEDs are made from old artillery shells or anything else that might be available and are set off either remotely or by the weight of Canadian vehicles as they drive over them. They have killed and continue to kill and wound more Canadians than have died in combat. They are a faceless enemy, an unseen force that leaves the Canadian troops with no way to hit out at anyone in retaliation. In Fifteen Days: Stories of Bravery, Friendship, Life and Death from Inside the New Canadian Army, Christie Blatchford quotes Captain Sean Ivanko after one lethal attack: “Literally, I was consumed with rage, every single cell of my body was screaming for vengeance, was screaming out with this blind rage.”

It is a war that is full of frustration, anger, confusion and uncertainty, as well as pride, accomplishment, heroics and camaraderie in the face of death and dismemberment. With a journalist’s eye, Blatchford reflects all of that in telling the stories of Canadian soldiers killed in Afghanistan. Her open admiration for the soldiers she met and travelled with in Kandahar and the families who have lost their children produces empathetic vignettes that capture the personalities of the soldiers and their successes. It also generates an often overwhelming sense of sadness at the losses. Yet all that does not blind Blatchford to things a journalist should note. She watches for military news management and finds it behind the sudden removal of herself and other journalists from a forward operating base just a day after they travelled there with a Canadian patrol and a day before military confirmation that a Canadian and a U.S. soldier had been killed by friendly fire, recalling the storm in Canada when four soldiers were killed by a U.S. air strike in 2002.

My suspicion, then and now, is that we were removed to avoid inflaming that sentiment and fuelling doubts about the Afghanistan mission. The lid was on—and stayed on tight. The military doesn’t have confidence that we in the press understand, and can put into context, what a friendly-fire death does and does not mean. Keeping the thing secret only feeds the sense there is something to hide.

Christopher Waddell is a professor at the School of Journalism and Communications at Carleton University in Ottawa and also holds the university's Carty Chair in Business and Financial Journalism. He is a former parliamentary bureau chief and executive producer of news specials for CBC News and a former national editor, Ottawa bureau chief and reporter for The Globe and Mail. 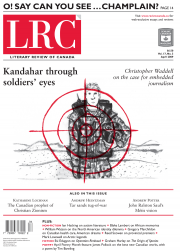