Many travellers record their experiences with a camera. Guy Delisle relies on an older method of preserving memories. Using the digits of his hand rather than digital handheld devices, the artist keeps sketchbooks where he draws the sights he encounters in other lands. He then reworks these impressions into comic strip travelogues, currently available in three volumes each named after a foreign locale.

A Quebec-born cartoonist and animator now based in France, Delisle leads a peripatetic existence for reasons of career and family. He worked for several years as a supervisor of animation with studios based in Asia. Because animation is a labour-intensive art form requiring thousands of nearly identical drawings to create even the tiniest illusion of motion, many studios outsource the drudge work to countries where artists can be paid in cents instead of dollars. This quest for cheap labour took Delisle to Shenzhen in China and to the North Korean capital of Pyongyang. More recently, Delisle has journeyed to other out-of-the way places because his wife, Nadège, works as an administrator for Médecins Sans Frontières.

In 2005, Nadège’s job took the couple to Burma, where they lived for roughly a year. While Nadège contended with the increasing rigidity of the Burmese regime, bent on preventing MSF from gaining access to politically restive areas of the country, her husband looked after their infant son, Louis. Aside from being a stay-at-home dad, Delisle did some children’s book illustrations and took a very sporadic part-time job giving lessons in cartooning. But, in general, the artist had a lot of free time to look around Burma and to fill up his sketchbook with local impressions.

The fruit of that year is Delisle’s new book, Burma Chronicles, a sequel to his earlier volumes Shenzhen (first published in 2000 in French and translated into English in 2006) and Pyongyang (2003 in French, 2005 in English). Taken together, the three books form a trilogy detailing extended sojourns in authoritarian Asian countries.

Yet to combine the People’s Republic of China, North Korea and Burma conflates these distinct countries too much. The distinguishing feature of Delisle’s cartooning is his attention to particularities of place, his care in capturing the specific texture of each locale he visits. Despite their ostensibly similar Marxist ideologies, North Korea’s dreary concrete-block Stalinism is worlds away from China’s open embrace of capitalism, which has turned Shenzhen into an overflowing stew of a city, teeming with life and chintzy kitsch.

Burma’s authoritarianism has an even more subtle face: while the army is very visible, open displays of violence are rare, usually coming in the form of muffled rumours of bombings and riots. The junta that has its grip on Burma throttles the nation quietly: what is oppressive is what doesn’t get said, the ideas people know they can’t express to foreigners or to each other, the pages that are silently excised from magazines and newspapers.

Burma, as Delisle encounters it, is not a nakedly Orwellian police state but something perhaps more subdued although still sinister, a suffocating authoritarian regime where the population has resigned itself, uneasily, to the status quo. In trying to distil the unspoken despair he encountered in Burma, Delisle takes a deliberately understated approach, one that is at first glance deceptively casual.

Fleetingly, we get a glimpse of the political situation. As it turns out, the Delisle family lives not too far from Aung San Suu Kyi, the Nobel Prize–winning dissident who in 1990 triumphed in the last free election held in Burma. But, of course, since Suu Kyi is under house arrest, as she has been since 2003, Delisle cannot really see her, only the armed guards who keep her imprisoned.

Suu Kyi is not only out of sight; she is also rarely talked about, at least openly and explicitly. “Actually, the Burmese don’t refer to her by name,” Delisle notes. “They just call her ‘The Lady.’ It’s like Voldemort in Harry Potter: ‘He who must not be named.’”

Not using Suu Kyi’s name is significant. On the few occasions when Delisle is able to talk about politics with Burmese, they speak guardedly. Delisle is very much aware that any conversation he records, if reported with too much identifying detail, could get his Burmese friends in trouble. So Burma Chronicles becomes a book about silence, a record of what cannot be said, an attempt to listen to the voices of a country where all must hold their tongues.

The Burmese as portrayed in the book seem oddly taciturn at first. Only as we reach the end of the chronicle do we realize that the silence is significant, that the gaps in the presentation are deliberate. With great ingenuity, Delisle has captured something real about tyranny, the way it oppresses not just through violence but also by limiting communication.

Delisle’s style of journalism, with its reliance on small anecdotes, can be contrasted to other approaches. Prominent journalists such as New York Times columnist Thomas Friedman practise a form of hit-and-run travel writing, where they parachute into a hot spot, interview a few bigwigs (and maybe a cab driver for local colour) and then go back home to expound grand themes about the future of globalization. Delisle’s small-scale storytelling seems like a deliberate antidote to this type of cocky and overheated journalism.

Because he travels for work and family reasons, Delisle spends a fair bit of time in each country and, more importantly, interacts with local citizens far removed from the halls of power. To some degree, he starts off trapped in an expatriate ghetto, a situation very forthrightly described in the early chapters of the book. Initially almost everyone he encounters comes from the same bubble-world of non-governmental organizations. But as he gains confidence, he is able to venture forward and talk to ordinary Burmese. Information about daily life seeps in and the cartoonist avoids making any big generalizations. His greatest asset is his commitment to the modest craft of observation. As such, his travel books ring true to the texture of everyday life in a way most journalism does not.

It is a measure of Delisle’s subdued approach to politics that only close readers will notice that he makes a pointed political jab in the title of the book. The junta that rules over the country refers to it as Myanmar. Those who reject the legitimacy of the junta use the older name Burma. By calling his book Burma Chronicles Delisle is making his political allegiances clear, but in a characteristically offhand and sly way.

There are other globe trotters besides Friedman to whom Delisle can be compared. In Burma Chronicles the artist records going to the Pasteur Institute in Paris and seeing wall posters reproducing art from Hergé’s Tintin comics. This nod to the classic Franco-Belgian comic book character is rich in meaning. Delisle and Tintin have much in common: both are quick to pack their bags and see the world, both are accident prone and seemingly naive. Delisle’s son, Louis, acts as a diminutive sidekick, just as the dog Snowy does for Tintin.

But the differences are important, too. Hergé’s famous “clear line” art masterfully created a brisk, crisply delineated world where each object had primary-colour bluntness. His style was a product of France’s imperial era and had the confidence of a metropolitan mindset that was ready to map out the globe within sharply defined borders.

Delisle, by contrast, lives in a post-colonial world where issues are much fuzzier, as is the art. Delisle’s squiggly lines and grey wash show a landscape of complex moral problems: for example, charitable groups in Burma have to grapple with the dilemma that by providing aid they might also be helping to prolong the life of the junta.

Hergé’s art was imperialist in another way as well: he often portrayed “natives” in stereotypical ways, such as the black-face caricatures that populate Tintin in the Congo. Not least among Delisle’s achievements is that he never falls into this sort of racism: his Burmese, like his Chinese and Koreans, are accorded the dignity of close attention. You never feel as you read his books that he is treating his characters as anthropological specimens or exotic curiosities. Rather, he is interested in the people he encounters as individuals embedded within their own culture and place.

Delisle’s art is so abstract it resembles Picasso as much as Hergé. Often his characters display both eyes on the same side of their profile, a Cubist-like impossibility. As cartoony as they were, Hergé’s characters moved in a world of seemingly hard objects, all bounded with firm and wiry lines. Delisle is less concerned with conveying objects than impressions. The landmarks of Burma—the pagodas and banyan trees—are rendered not photographically, still and fixed, but rather as lingering memories, wavy and indistinct around the edges.

Near the end of his stay in Burma, Delisle goes on a three-day meditation retreat at a Buddhist temple. He successfully conveys what a first encounter with meditation is like: the initial difficulty in dealing with silence, the awkwardness of figuring out the rules of a new environment, the see-saw emotions as moments of grace give way to doubt and uncertainty. This sequence is particularly effective in using the unique component of the comics medium: the way cartooning relies on the interaction between words and pictures. While Delisle’s succinct captions convey his uncertainty and confusion, his art becomes more luminous, almost shimmering. In a very subtle manner, Delisle is able to impress upon readers the strange dynamics of meditation, where nothing happens, but your view of the world changes.

Burma Chronicles is Delisle’s best book. His earlier travelogues were filled with acute observations, but tended at times to pile on anecdotes in a hodgepodge manner. The new book by contrast is superbly crafted. Taken one by one the casual little stories seem minor, but as they add up we get a rich picture of Burma, resonant with political and social meaning. Some of the best modern cartooning has been non-fiction: Joe Sacco’s searing reports from Palestine and Bosnia, Chester Brown’s daring reconstruction of Louis Riel’s life, Robert Crumb’s eye-openingly frank autobiographical stories. With his new book, Delisle joins the rank of these other great cartoonists.

Jeet Heer, a Regina-based cultural journalist is co-editor, with Kent Worcester, of Arguing Comics: Literary Masters on a Popular Medium (University of Mississippi Press, 2004) and A Comics Studies Reader (University Press of Mississippi, 2008). With Chris Ware and Chris Oliveros, he is editing a series of volumes reprinting Frank King’s Gasoline Alley, three volumes of which have been published by Drawn and Quarterly under the umbrella title Walt and Skeezix. 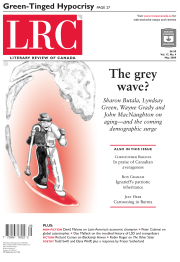