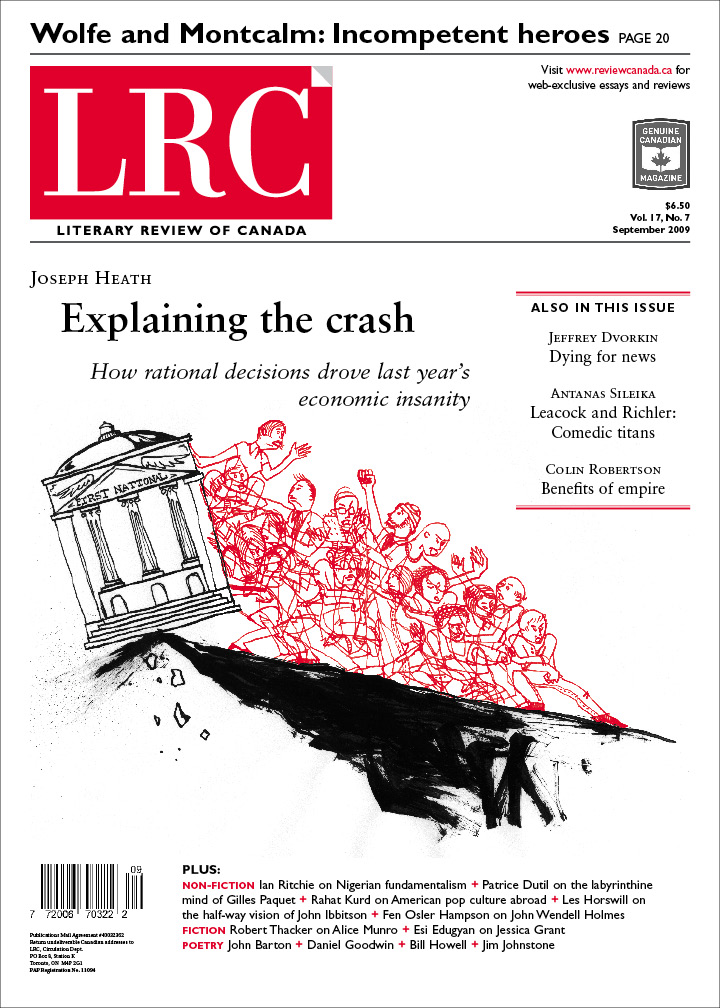 Did the banks go crazy? That’s the question U. of T. philosophy professor Joseph Heath asks in his provocative feature essay for our September issue, marking the first anniversary of what’s been dubbed “the financial meltdown of 2008.” In contrast to ex-Federal Reserve Board chair Alan Greenspan, who described his state of “shocked disbelief” at what he considered the irrational behaviour of institutional lenders, Heath argues that individually rational decisions proved disastrous when they coalesced into general practice.

September 2009 marks another auspicious anniversary, this time in Canadian history: it has been 250 years since the Battle of the Plains of Abraham in Quebec City. Jack Mitchell, a Toronto-based poet who has written his own full-length epic about the battle, considers five books that deal with this mythic moment in Canadian history and provides a brilliant critical analysis of the rather sordid political tug-of-war that ensued earlier this year over a proposed re-enactment of the battle itself.

In the past twelve years, more than 1400 reporters worldwide have died in pursuit of the news. A glamorous and exciting profession can also be a deadly one, apparently increasingly so. Jeffrey Dvorkin, one of Canada’s most prominent journalists (first with the CBC and then with National Public Radio in the U.S.), examines two books that look at the lives of such brave, and sometimes reckless, reporters: Murder Without Borders: Dying for the Story in the World’s Most Dangerous Places by Terry Gould, and Unembedded: Two Decades of Maverick War Reporting by Scott Taylor.

On the fiction front, a new Alice Munro collection of short stories is always welcome front-page news. We are privileged to have her new volume, Too Much Happiness, reviewed for us this month by Robert Thacker, author of the 2005 critical biography of the author’s work, Alice Munro: Writing Her Lives.

Happy autumn to all our readers. Bronwyn Drainie Editor