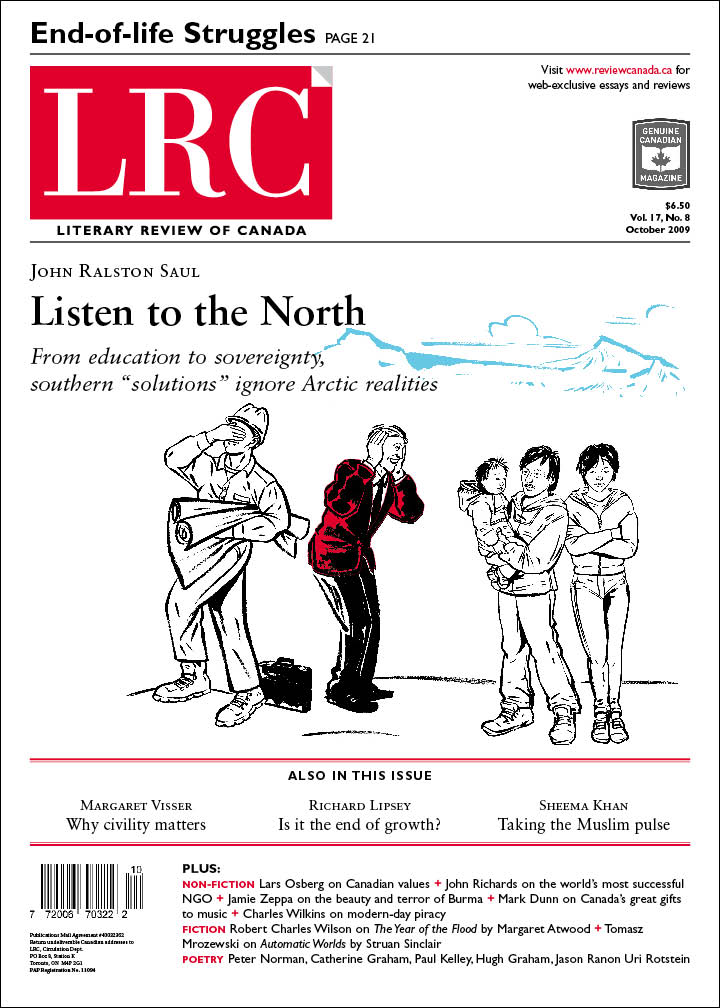 John Ralston Saul has spent large swaths of his writing life examining aspects of the Canadian personality: history, values, geography, politics. He looks at important areas others spend little time on, for example the native or aboriginal roots of Canadian culture and society in his recent book, A Fair Country. In the feature essay for our October issue, Saul concentrates on Canada’s North and on southern Canadians’ insistence on prescribing what’s best for our northern population without ever really taking their views into account. The northern approaches to everything from education to sovereignty, from economics to culture, tend to be quite different from ours and in this essay Saul eloquently encourages us all to “Listen to the North.”

Margaret Atwood claims she’s no science-fiction writer, but three of her novels, The Handmaid’s Tale, Oryx and Crake and most recently The Year of the Flood, are set in future dystopias that draw on at least some of the genre’s conventions. So what do bona fide SF writers think of Atwood’s flirtation? We asked Robert Charles Wilson, Hugo-Award-winning author of Spin and Axis to give us his analysis of Atwood’s latest. His verdict? “Year of the Flood often reads like a novel of substance gene-spliced with a back issue of Mad magazine.” That’s intriguing.

The crisis in fossil fuels and the threat of climate change are leading thoughtful economists to write books postulating a shrunken global village, brought about either by crisis or smart planning. Managing Without Growth: Slower by Design, Not Disaster by Peter Victor and Why Your World is About to Get a Whole Lot Smaller by Jeff Rubin are two such books, reviewed in this month’s LRC by Richard G. Lipsey, emeritus professor at Simon Fraser University and author of one of the most widely-used economics textbooks in Canada. “Humans,” says Professor Lipsey, “are technological animals and have invented and innovated throughout history.” He is skeptical about the notion of taking continued growth right out of the world equation either accidentally or on purpose.