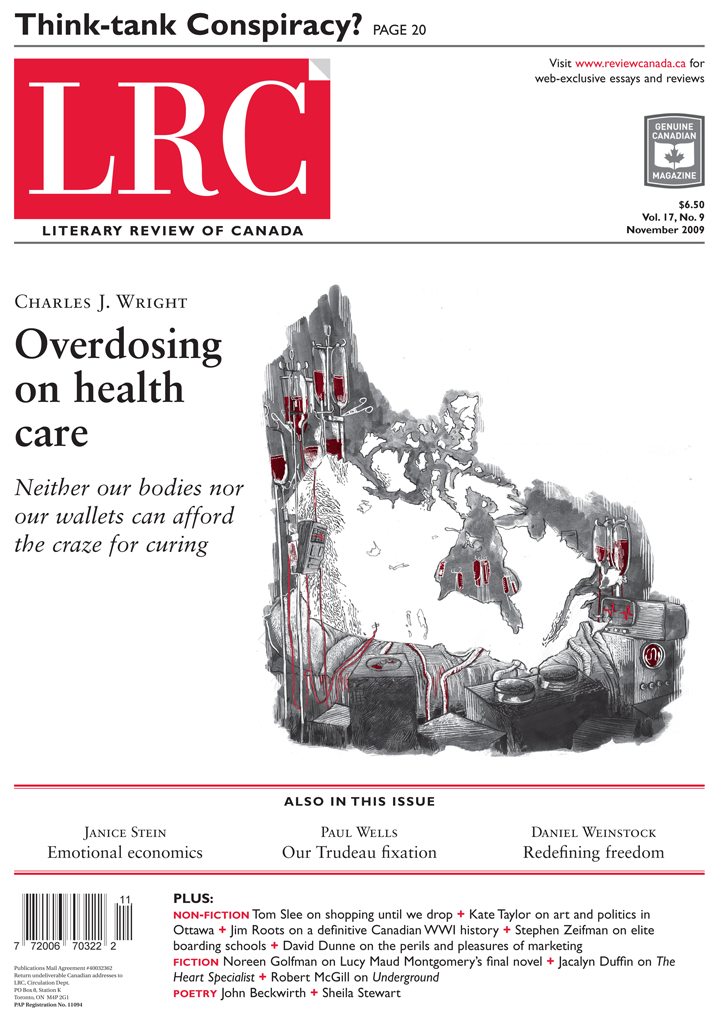 Universal screening in the form of mammograms for women and PSA tests for men has come under fire this past month, and our lead November essayist, Dr. Charles Wright, a Canadian physician and healthcare consultant, sees those tests as part of a larger picture: the over-medicalization of society. From astronomically costly cancer drugs to alarmingly high rates of Caesarean births, he argues that Canadians are overdosing on health care and calls for an “intelligent, evidence-based approach” to setting limits.

The effects of the economic meltdown of 2008 are still very much with us, and so are the questions about why and how it happened. LRC contributor Janice Gross Stein takes an entirely different tack from the financial commentators in her essay, “Between Euphoria and Fear,” in which she dissects the emotions underpinning the financial moves of experts and lay investors alike. Conventional microeconomists might look askance at Stein’s analysis of instincts, feelings and mood swings, but our readers can judge for themselves the validity of her arguments.

Volume Two of John English’s authoritative Trudeau biography has appeared, under a title that will ring bells. Just Watch Me: The Life of Pierre Elliott Trudeau 1968-2000 takes that enigmatic politician through his prime ministerial years and beyond. Our reviewer, Paul Wells of Maclean’s magazine, praises English’s work but then asks provocatively why we are so obsessed with Canada’s 15th prime minister and whether more books about him are really needed.

And on the culture front, don’t miss Globe and Mail writer Kate Taylor’s review of Art and Politics: The History of the National Arts Centre, a “powerful” piece of historical research written by Ottawa cultural journalist Sarah Jennings on the occasion of the Centre’s 40th anniversary.