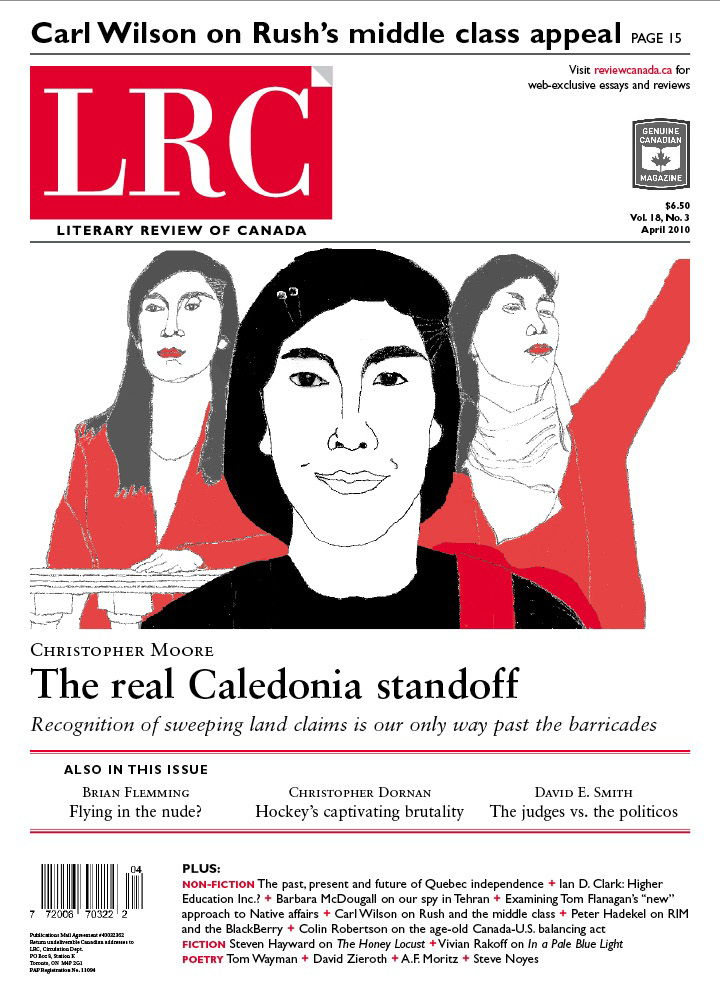 Canadians are feeling quite pleased with themselves these days. Our banking system seems to have staved off the direst effects of the financial meltdown, and what about those Olympics, eh? But one subject can (and should) bring us down to earth fast: the ongoing disaster of our history and relationship with the Native peoples of this land.

This month in the LRC, two provocative pieces on that subject. First, an essay by award-winning historian Christopher Moore about the real roots of the Caledonia standoff (four years and counting) and what they reveal about land claims that cover much of the richest territory of southern Ontario. Moore has been researching the B.C. approach to land claims and believes Ontario has a lot to learn. Secondly, a Mi’kmaq lawyer named Pamela Palmater takes on Beyond the Indian Act: Restoring Aboriginal Property Rights, a book co-authored by Christopher Alcantara, Andre Le Dressay and Tom Flanagan. The latter of these writers penned the inflammatory First Nations? Second Thoughts, in which he accused Native Canadians of “wasteful, destructive, familistic factionalism.” Palmater comes to her own conclusions as to whether those ideas of Flanagan’s have changed in ten years, and whether the three authors’ new proposals for voluntary privatization of First Nations land are an opportunity or a trap.

Another Canadian artifact that hasn’t been around quite as long as Native land claims (although it sometimes feels that way) is Rush. Yes, the Toronto-based band now working its way through its third generation of fans and critics. You know you’ve arrived in music circles when academics start writing theses about you, and that’s what Chris McDonald, an ethnomusicologist at Cape Breton University, has done with his Rush, Rock Music and the Middle Class: Dreaming in Middletown, reviewed for us this month by just-plain-brilliant music critic Carl Wilson, who has his own delightful and acerbic theories about Rush’s longevity.