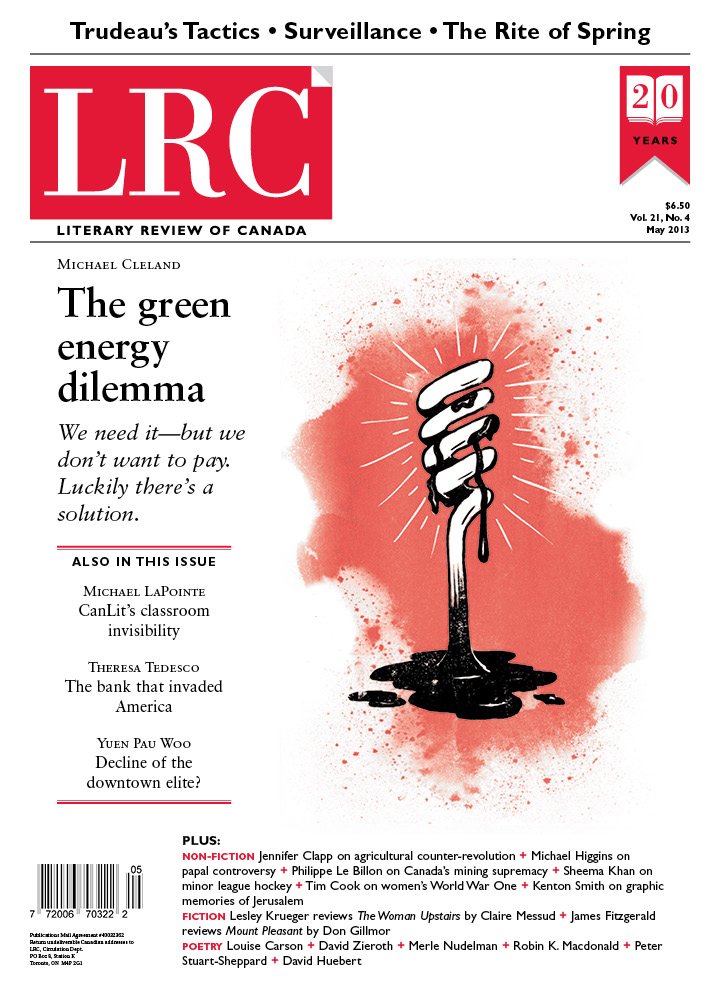 Re: “Demand Better,” by Michael Cleland

Michael Cleland’s essay is a refreshing, thoughtful perspective on the conundrum that lies at the heart of our energy debates. Affordable energy service on demand is what we want; the environmental consequences, we don’t.

The finger wagging and acrimony that often paralyzes planning hearings for power plants, pipelines or transmission corridors is rooted in unease over the role of supply. The “angels”—distributed energy, solar, wind, bioenergy and geothermal—when stacked up against the “demons” such as coal, oil, gas, big hydro and nuclear, make for good theatre but no light. Cleland wisely stays clear of the ideological fault lines that shape the tenor of such public discourse. His focus, instead, on demand is an elegant twist but not without its limitations and pitfalls.

He introduces the benefits of energy efficiency and chastises Canadians for being “laggards” in how we manage energy use. The energy intensity ratio of different countries is the metric of this beauty contest that points to Canada’s poor performance. The metric reveals what is suggestive but hides several crucial features. I remain unconvinced; the whole story is a lot more complicated.

The mantra of energy efficiency has become so integral a part of the lexicon of energy policy prescriptions that exhortations to improve efficiency are the easiest political proposition to endorse. In the public mind, energy efficiency sits at the pinnacle of approval ratings and there is no apparent downside. Notwithstanding, we need to pay close attention to the historical evidence that suggests that higher efficiency of energy conversions leads, over time, to higher rather than lower energy use.

Energy efficiency does make eminent sense: the benefits are real reductions in cost and environmental impacts of production. It would, however, be inappropriate to conclude that energy efficiency, in and of itself, comprises a substitute fuel or replacement supply. The nature of the problem is best illustrated by the rising demand for cooling services (air conditioning, refrigeration). Although higher efficiency of the units has driven down the costs, substantially, over the last three decades, the low price of service has widened access with average household consumption of electricity outstripping the gains from efficiency improvements. For example, in the United States, use of electricity to cool buildings is greater today than electricity use for all purposes in the 1950s and, globally, affordable cooling services are driving consumption requirements to unprecedented levels.

Cleland’s juxtaposition of supply versus demand is somewhat shaky and could be better formulated to say “demand better supply,” recognizing that the two concepts are an integral part of a continuum where energy efficiency ought to play a major role through the entire supply chain to mitigate negative environmental impacts.

Re: “Eating and Surviving,” by Jennifer Clapp

Jennifer Clapp’s review of Sarah Elton’s Consumed: Sustainable Food for a Finite Planet addresses the crucial concern of feeding an ever-growing humanity (“expected to reach 9 billion by 2050”). It considers many of the vital concerns influencing this issue—climate change, pollution, environmental concerns, the Green Revolution, fair trade, organic production and energy efficiency. The heart of Clapp’s review relates to the two foci of Elton’s work: the human scale of production and the industrial food mechanism. This reader was enthralled! The essay continues a lengthy tradition of research and theory, beginning with the horseman of the Book of Revelations, through Thomas Malthus, Amartya Sen, the United Nations, and many others.

However, there was a fundamental concern aroused by what was missing. It was as if Clapp’s review was from a “glass half full” perspective—that with several interventions (especially by government), the food supply situation with great difficulty will eventually be solved. But the main actors in the food supply (other than by self-production) are agribusiness conglomerates. Food has an ever rising price (the rich-poor concern), and production and sale are increasingly global, not local. There are patents and subsidies at play, and the North-South disparity is ever present (dramatically expressed by the recent land grabs).

In other words we’re addressing the issues of business and price on a world scale. How can the regulations of national governments regulate global actors? I found Clapp’s review too kind to Elton’s book; the glass is half empty.

Re: “What's Happened to CanLit?,” by Michael LaPointe

It is an unnerving reflection on Michael LaPointe’s most interesting essay on the difficulties of teaching Canadian literature in schools that if Canadian novels were omitted entirely from such teaching (classical foreign novels could be used instead: Hemingway et al.) and the Canadian curriculum limited to poems and short stories, the difficulties he outlines would vanish entirely.

Re: “The Overlooked Majority,” by Tim Cook

In recent years, Tim Cook has vividly brought to life the heartbreak and heroism of Canada’s Great War history, so we take seriously the two important criticisms of our book, A Sisterhood of Suffering and Service: Women and Girls of Canada and Newfoundland During the First World War, that he raises in the course of his review.

First, Cook notes the apparent contradiction between Joan Sangster’s argument that women’s wartime labour (paid or unpaid) did not significantly advance women’s rights in Canada and the belief expressed by the women interviewed in And We Knew How To Dance: Women in World War I that their wartime experiences marked a clear turning point for them as women. This contradiction prompted us to engage explicitly with the question of whether the First World War transformed women’s rights or expectations. Each author was encouraged to engage with this question, but they chose whether to emphasize it in their chapter. We (the editors) then attempted to assess their collective findings. We argue that “it is difficult to avoid concluding that the Great War did not usher in a sweeping transformation of prevailing gender norms”—in other words, in terms of women overall we agree with Sangster—but, as is suggested by the women interviewed for the film, we also believe that “on a personal level, the transformative power of the Great War was everywhere evident.” By not tying our authors too closely to the question of their support for Sangster’s thesis, we hoped to spark other conversations about female wartime experience and early 20th-century society. The relationship between wartime and equality is certainly an important question, but it is not the only question.

Second, Cook notes that greater consideration of the factors that led to (many) women’s federal enfranchisement in 1917 would have been welcome. Unfortunately, this topic has attracted limited scholarly attention for too long, making it difficult to say more until someone revisits the issue as part of a major research project. In our introduction we tried to place the 1917 enfranchisement in context, but this important aspect of female Great War history unquestionably has a place on the list of topics that we hope future scholars will be inspired to tackle.

As for the “awkward” title, its apparent unwieldiness actually represents cutting-edge fashion. In difficult economic times hemlines go up and titles for history books get longer and more descriptive! (Another poorly studied phenomenon.)