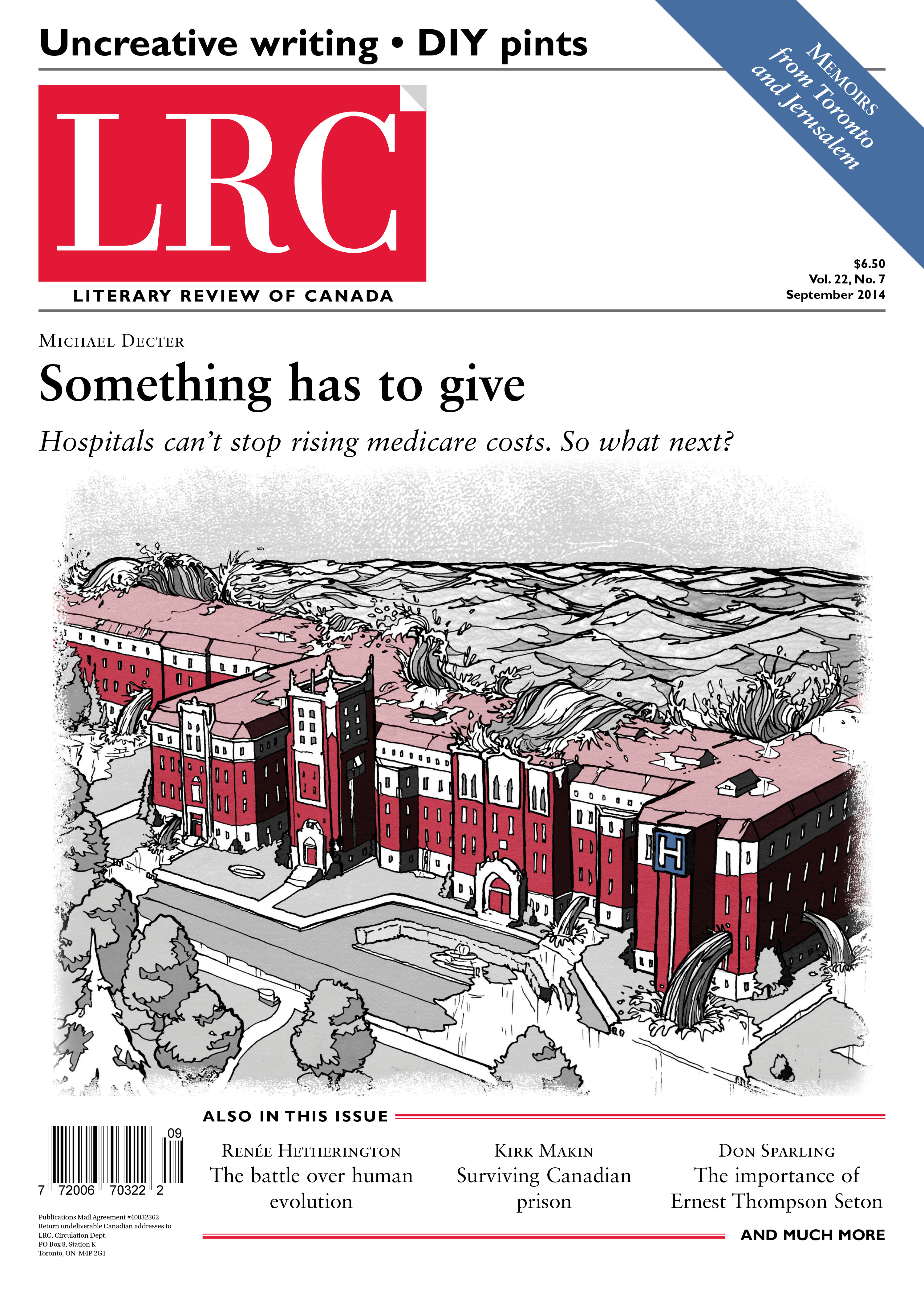 Re: “Saving Medicare,” by Michael Decter

The graphic symbol of Canada’s increasingly poor performance in health care is Exhibit ES-1 of the Commonwealth Fund’s country rankings in healthcare delivery. Placing fifth out of six in 2010, Canada has fallen to tenth out of eleven in 2014. Clearly, things need to change. Michael Decter argues that Canada must move health care out of the hospital system. He is absolutely correct. Care provided primarily in hospitals is inefficient, expensive, inconvenient and (with the growth of hospital-borne superbugs) often dangerous.

But this is not a new argument. And most countries have made substantial progress away from hospital-based models. So the intriguing question is not really “what should we do?” but rather “why is Canada so far behind almost everyone else?” Thus Decter’s analysis is incomplete: we need to understand not only strategies for change, but what barriers to even the most sensible strategies doggedly remain in place.

The first problem is institutional and historical. As Decter explains, Ottawa originally agreed to pay for half of all hospital and physician costs in a public insurance system. Critically, this did not include outpatient clinics or other healthcare personnel working outside hospitals. From a provincial point of view, it made good financial sense to keep health care strictly within hospitals (and in the hands of doctors) as much as possible. However, Decter also notes the impending reduction of federal health transfers. While a strain on provincial budgets, the glass half full here is that, by 2037, federal funds will only amount to 6.7 percent of provincial expenditure, so there will be considerably less financial incentive to keep health care in the hospitals.

A second barrier is the medical profession. Canada is unique in the power given to physicians to be part of the political decision-making process. The medical profession is thus in an excellent position to block cost-saving measures such as the utilization of less expensive healthcare personnel. In response to Ontario’s attempt to expand the scope of practice for nurse-practitioners and pharmacists, for example, the Ontario Medical Association responded that “having these roles filled by non-medical personnel is like having a member of a flight crew fly an airplane.”

Third, many of these new strategies involve discussing the role of the private sector. Decter describes Nova Scotia’s use of “community paramedicine,” but does not mention that this is a private, for-profit operation from training to service provision. Once the issue of using more private health care is addressed explicitly, the simplicity of paramedicine becomes a politically loaded debate.

The article on this subject is quite comprehensive in addressing existing newer avenues to health care and understanding the need for more various ways to develop effective out of hospital care.

One of the keys to the success of the Elizabeth plan was the hiring of skilled nurses. This continues to be a key component, as nurses, like physicians have a comprehensive foundational education, unlike most paramedic workers. If their education was the same as nurses they would be nurses too, and their education costs would also be the same. One of the difficulties in Alberta’s privately run aging care system is a lack of requirement for enough well educated and appropriately educated staff, that is, nurses. Nurses cost more money to educate and hire so the funding of any and all out of acute hospital care that requires the education and thus the skills and now ledge of a nurse should be faced and done. Too often options to this mean inadequate health care resulting in some very seriously debilitating consequences for patients.

We are very grateful to Professor Shorter – whose historical work has been so helpful to us – both for his praise and his critique. That critique, however, is the result of some misunderstandings of our views, and we appreciate the opportunity to clarify them here. For reasons of space we focus on three issues.

First, Professor Shorter says that our target is delusional disorder. In fact, our aim is to understand delusion as a symptom rather than any disorder in which delusions appear, just as one might investigate inflammation rather than this or that condition with inflammation as a characteristic feature. As we say, “[d]elusions are symptoms of illness, not illness proper… it’s important to think about delusions in isolation from illness.” (59). As a result, we don’t “drag in” schizophrenia to strengthen an inadequate case. Schizophrenia is front and center from the outset because so much of what we know about delusions (and psychosis more generally) comes from schizophrenia research.

Professor Shorter’s miscue undermines a good deal of the critique that follows. For example, he thinks that we ignore our own distinction between form and content. In fact, we say nothing about form and content in psychiatric illness. If we were concerned with disorders, then he is quite right that the form of interest would have to be the disorder, and the symptoms, including delusion, would have to be classified as content. But since our target is delusion the symptom and not delusion the illness, it is no confusion to identify jealousy as a form, and the particular belief that your wife is sleeping with Lady Gaga’s dry cleaner, for instance, as the content. The coherence and importance of that version of the form/content distinction is evidenced by the way it clarifies the respective biological and cultural contribution to particular delusional thoughts.

It is also likely that Professor Shorter’s complaint about the attention we give the Truman Show delusion despite its being “a garden-variety delusion, although somewhat extravagant in conception” also derives from his misunderstanding of our target. We entirely agree with him that the Truman Show delusion is nothing more than a garden-variety delusion (a delusion of control, on our view). Indeed, we belabour that fact, and much of our account of delusions is designed precisely to understand why it is that all delusions are garden-variety – that is, why they remain the same across culture and history – but that the beliefs of individual patients can and do change and frequently become extravagant.

The second important objection Professor Shorter makes is that delusions are not, as we claim, all social phenomena. His doubt, for example, that the delusion that vermin are creeping on one’s skin is a case in point. On the face of it, indeed, “delusional parasitosis” seems to have nothing to do with the social. And yet it does: social living in primates brings with it the risk of parasitic infection. Parasitic infection is thus the ur-social threat, and the thought that one’s skin is infected is, we hypothesize, related to the paranoid fear of the harm that others can do to us. We tell a parallel social story for each of the delusional motifs, and this underlying coherence is a central reason for our belief that delusions are unitary and have a “psychology” even as they are neural phenomena.

Finally, we were cut to the quick by Professor Shorter’s description of our views as “speculative academic concepts” and no more than a list – by implication, an arbitrary list – of the factors we think are important to understanding delusion. Our theme is the role of the social environment in the etiology of psychosis, and we don’t cherrypick to suit our fancy; our presentation of the social factors in psychosis represents what the research has revealed. More importantly, while our account may turn out to be mistaken in detail or fundamentally flawed, we are pretty confident that it is a theory – coherent, testable, and consistent with a vast body of data about psychosis. We are also pretty confident about something else. Psychiatry is currently sinking under the weight of its data. Whatever the success of our own attempt, broad theories of some kind are not to be disparaged. Without them, it’s hard to see how psychiatry is going to stay afloat.

Re: “Can't Lit,” by Darryl Whetter

I teach in one of the English departments that Darryl Whetter says is ruining creative writing in Canada (at the University of Toronto), and I did my PhD at the other (at Dalhousie University). I don’t recognize much of either in his bitter caricature. “Rhizomatic poetics” haven’t been “trendy” in Canadian English departments since the 1980s, if they ever were. I’ve never attended the University of New Brunswick’s annual poetry weekend, so I suppose it’s possible that its students “always invoke Jacques Derrida when reading their poems,” but I doubt it.

Whetter says English professors, not published writers, control the education of our writers. The English departments at the University of Toronto only offer a few creative writing classes, but all are taught by faculty who are also writers: George Elliott Clarke, Rick Greene and Rosemary Sullivan, to name just the Governor General winners. He says Canadian English departments “don’t respect living Canadian writers,” but we teach books by living Canadian writers every year, and we’ve never yet appointed a dead writer-in-residence. Maybe it’s different elsewhere in the country, but again, I don’t think so.

If our universities and our government are as biased against educating and supporting creative writers as Whetter suggests, the bias has been stunningly ineffective. There is no shortage of creative writers in Canada; there is, rather, a shortage of readers of creative writing. Any “hostility”—“skepticism” would be a fairer term—in Canadian English departments toward creative writing as a discipline isn’t directed at writers, but at the booming industry of creating ever more writers, what Whetter calls a “cash cow” for the humanities. Literature departments have a responsibility not just to the bottom line but to the best books already in the world, old or new. If we, or the books we teach, should happen to inspire or help a future writer, lovely, but that’s not our main job. Our job isn’t to produce more and better writers: it’s to produce more and better readers, to foster a sophisticated appreciation for literary art that will stay with our students as they become consumers and citizens. We make readers, and for the most part leave it up to the world to make writers. At the moment the world is ahead, and that’s the real problem.

And if anyone doubts the importance and influence of creative writing education, consider the 2007 Granta issue that featured new American writers. Most of the submissions and virtually all of the published pieces were written by students from writing programs. Jazz musicians used to learn their craft in honkytonks. Now they go to school. Much the same has happened in the field of creative writing. Get used to it.

What he overlooks in his focus on universities is the vast growth of other creative writing institutions and informal associations. My own college graduate certificate program has had hundreds of grads go on to publish over a thousand books, and informal associations such as the Writers’ Community of Durham Region (300 members) are lively and expanding. English departments have no role in creative writing education outside the universities.

My only quibble has to do with his complaint over yarns about yesteryear, yet another casual sideswipe against historical fiction. Funny about that—it is a Canadian complaint that is found laughable in Europe, with its dark and undigested history. I once asked Kazuo Ishiguro on a panel about why this subject should be such a big deal in Canada, and he said it was a sign of our well-intentioned earnestness. Hilary Mantel, Martin Amis and David Mitchell can hardly be accused of merely spinning yarns.

This quibble aside, Whetter’s call to arms is important and enlightening. Writers of Canada unite! You have nothing to lose but your footnotes!