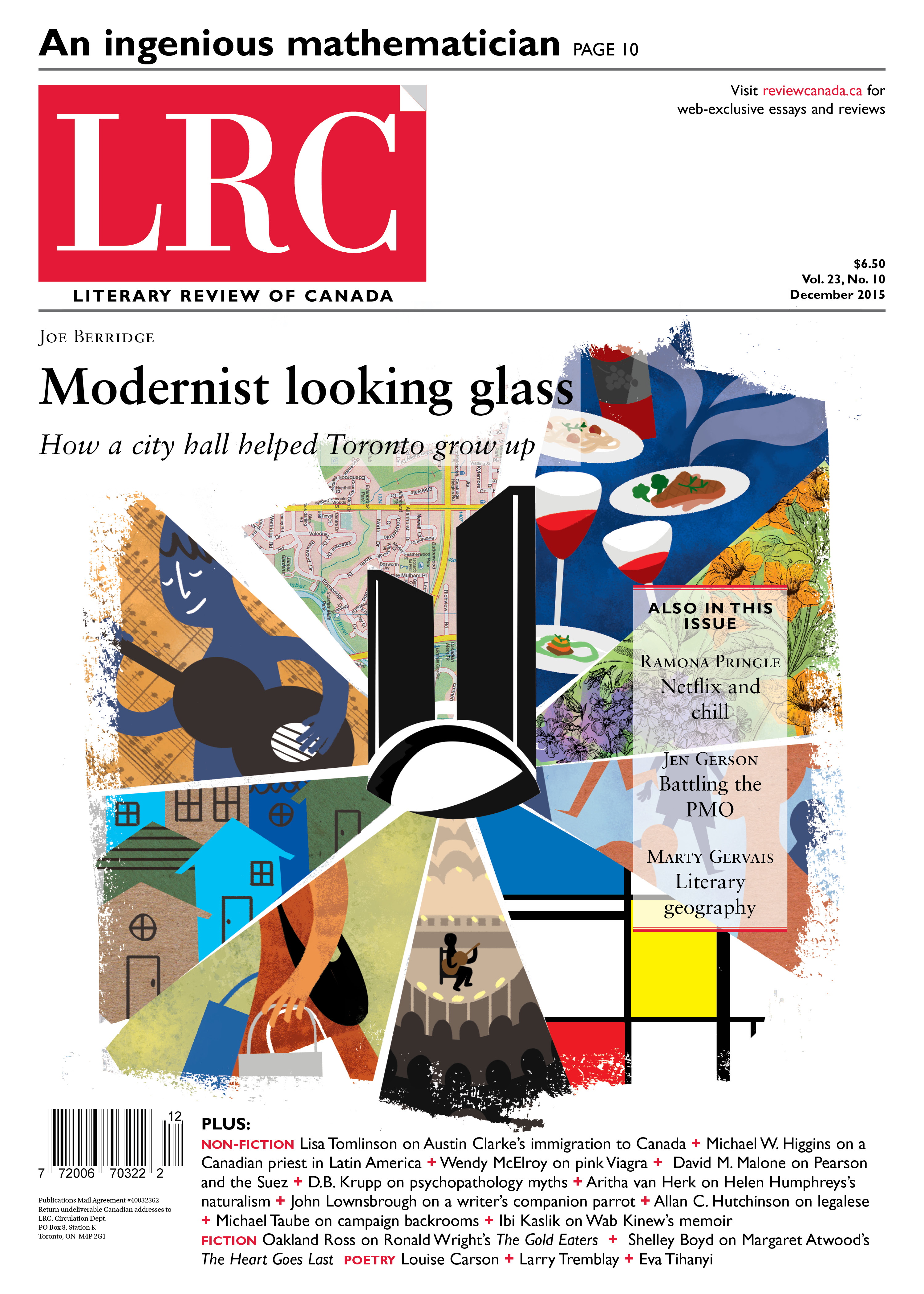 Welcome to the December issue of the LRC. Here’s what’s in store this month.

Exactly when did Toronto decide to leave behind its parochial past and start its climb to international recognition? In a review of a new book on the design and construction of the New City Hall, Joe Berridge makes a good case that the date was September 1958, when in the face of considerable opposition Finnish architect Viljo Revell won the building’s design competition from among 500 entrants. Even half a century later, says Berridge, this event deserves to be celebrated as a remarkable moment in the history of “one of the top dozen most important cities in the world.” Detailing exactly who should be credited for the feat, he also maintains that it should be remembered for more than that: “A great city is built by great people reaching for great things,” Berridge notes “It is as simple and as complicated as that.”

For many viewers, especially those under the age of 25, TV watching today is a very different experience than it was a decade ago. In the face of a new generation of TV viewers who seem constitutionally averse to paying for content, how should the industry respond, asks our contributor Ramona Pringle in a review of a new book by University of Ottawa academic Michael Strangelove. Says Pringle, “Post-TV presents a smart argument about an ecosystem in shift, but where Strangelove presents the issues facing the industry in a post-TV landscape, he presents few paths forward. Is arguing that piracy has become normal so controversial that it requires such a thorough analysis? Perhaps more controversial, or at least uncomfortable for the traditional powers that be, is the reality that piracy is unavoidable, and entirely new processes, systems and relationships between content consumers and providers need to be established.”

Doug Gibson is one of this country’s most famous literary editors. During an illustrious career, he has gained a reputation for forging close personal relationships with the authors he works with. He has now written a second volume of memoirs, whose subject is the book tour Gibson undertook for the first. Our reviewer Marty Gervais observes that the second volume’s emphasis on Gibson’s own cross-country travels is in some sense merely a device so that Gibson can shed further light on the storytellers he came to know. “Gibson, like no one else, grasped their writing habits, obsessions, weaknesses,” says Gervais of these famous authors. “That may explain his loyalty to them, and the profound friendships developed in guiding these writers to recognition.”

Memoirs by literary authors are also well represented in this issue. John Lownsbrough reviews the distinctive life and works of BC writer Brian Brett as told in Brett’s latest autobiographical work; Lisa Tomlinson delves into the narrative techniques employed by novelist Austin Clarke in Clarke’s retrospective look at his career; Ibi Kaslik chronicles the complex father-son relationship described by broadcaster Wab Kinew in his revealing family memoir; and Aritha van Herk identifies the multiple figurative strands which poet and novelist Helen Humphreys unravels in her meditation on the Napanee River running next to her Ontario home.

And there is much more, Michael Higgins assesses the mission of radical Quebec priest Claude Lacaille; Michael Taube looks at the legacy of Ontario’s Big Blue Machine; Allan Hutchinson delves into the literary side of legal arguments; Wendy McElroy explores attempts to pathologize female sexuality; Melanie Frappier assesses the career of mathematician John Horton Conway; David Malone details the role of Lester B. Pearson in the Suez Crisis and Daniel Krupp assesses the arguments concerning the modern concept of the psychopath. Oakland Ross and Shelley Boyd review new novels by Ronald Wright and Margaret Atwood, and our poetry pages feature the works of Louise Carson, Eva Tihanyi and Larry Tremblay.

Meanwhile, in this month’s letters section there are responses to the essay in the October issue by Antanas Sileika from Scott Staring and Paul Conway.

At this time of year, new books can serve a variety of purposes, not least helping to fill gift lists. Hopefully the reviews in this issue provide not just hours of diversion themselves, but spark a few gift-buying ideas as well. Happy holidays!