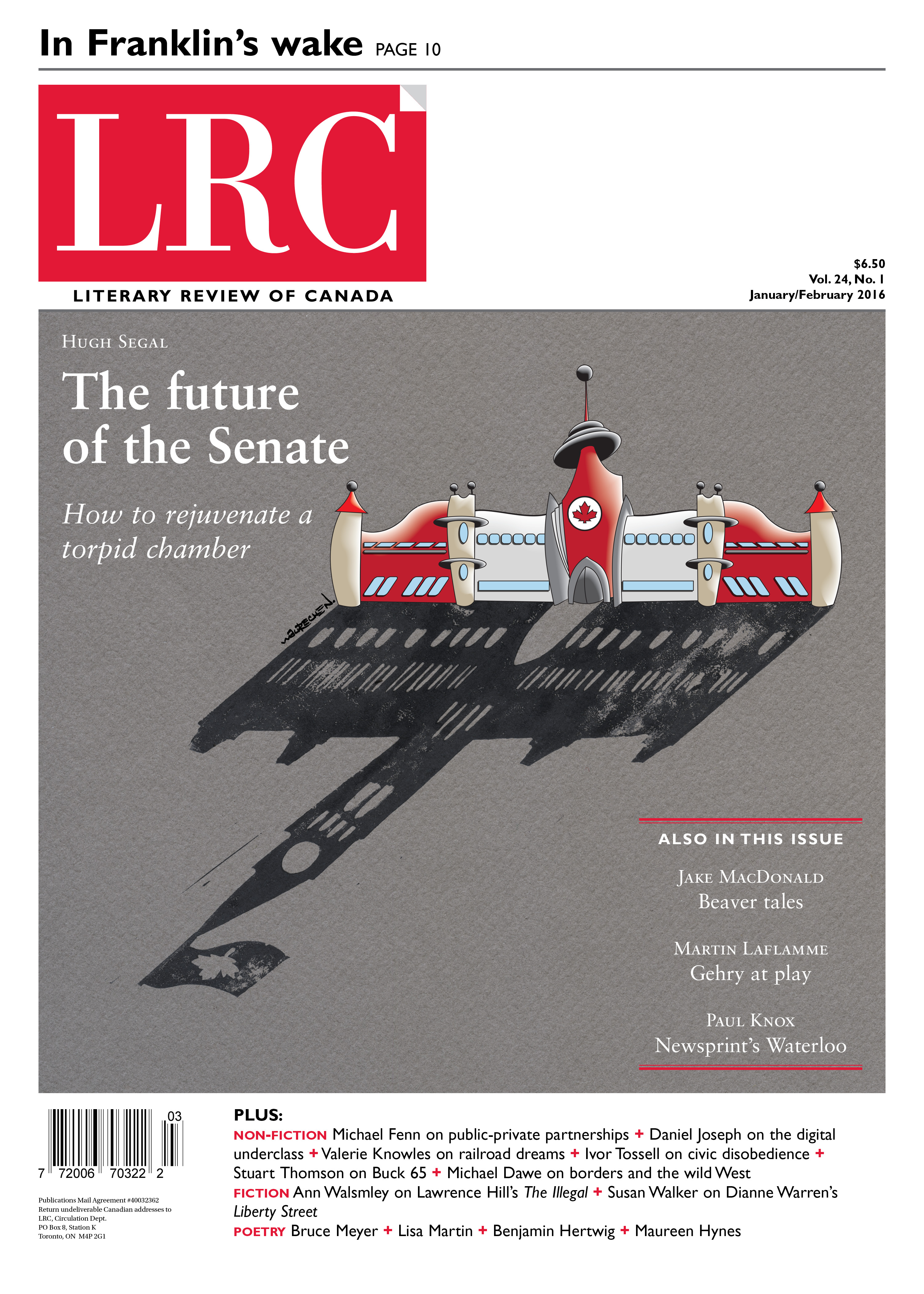 Welcome to the January/February issue of the LRC. Here’s what’s in store in this first instalment of 2016.

Few national institutions have fallen into such disrepute as Canada’s Senate. Expense scandals and high profile court cases have spurred widespread support for abolition. Well known political commentator and former senator Hugh Segal argues for a different solution. “Canadians have every right to a bicameral parliament that reflects the confederal balance and compromises that made the idea of Canada a reality,” says Segal. “Achieving it will require a careful sense of legislative prudence and inquiry.” Based on his deep knowledge of the upper chamber’s practical functioning, he offers concrete proposals for change — most significantly new Senate procedures and specific suggestions for how any new selection procedure for senators should be structured.

Are Canadian newspapers managing to adapt successfully to today’s digital revolution? In a review of two new books which consider the contemporary state of Canadian newspapers, Paul Knox shows that sweeping apocalyptic predictions might be easy to make but do not capture the nuances of an unsettled media landscape. “It is far from clear that large-scale text-driven journalism is on its deathbed,” notes Knox. “Many newspapers are in big trouble, and newsprint as a medium is obviously seriously threatened. But as news systems are reshaped globally there is plenty of evidence that large-scale operations will survive.”

Robert Matas reviews the memoir That Lonely Section of Hell by former Vancouver policewoman and Pickton case investigator Lori Shenher. Summarizing Shenher’s arguments concerning systemic neglect of Downtown Eastside murders, especially of vulnerable indigenous women, Matas maintains that much remains to be done despite the provincial inquiry that followed Pickton’s conviction. “What can we expect from a national commission of inquiry?” Matas asks. “Shenher’s story suggests some pitfalls to avoid.” Indeed the inquiry on missing and murdered aboriginal women might consider employing Shenher, Matas says, to help ascertain what has gone wrong and how we as a nation can best rectify it.

“It would be interesting to poll some school-children,” says Jake Macdonald, “and determine how many know that Canada’s first currency was the beaver pelt, and the country’s first government, the Hudson Bay Company, was built almost entirely on the beaver industry.” In his review of two recent books on the beaver, Macdonald surveys the myriad interconnections between this species and our country’s history, and explains why the animal serves as such a fitting emblem of Canadian national unity. “Humanity almost obliterated beavers from the North American landscape,” notes Macdonald, “and these books are full of reasons to celebrate their return.”

John Geiger and Alanna Mitchell’s Franklin’s Lost Ship received considerable publicity in the lead-up to its publication, with the book becoming just as notable in some quarters as the discovery it celebrates. While some commentators stressed the disputes the book spawned over who deserves most credit for finding the Erebus, our own reviewer, Adriana Craciun, hones in on the parallels the book draws between the actions of John Franklin and his modern day admirer Stephen Harper. “It is an interesting choice,” says Craciun, “linking the visions of two controversial men whom you see as heroes, especially when one of them was at the helm of the worst disaster in exploration history.”

Few recent trends in government finance have been as subject to vociferous debate as the rise of public private partnerships or PPPs. Our contributor Michael Fenn looks at a new book which is critical of the trend. “The ground between the ideological left and the ideological right on the topic appears to leave little room for objective, evidence-based analysis and hypotheses,” states Fenn. And no one can deny the significance of this debate: “Over the next several years, Canadian governments at all levels will undertake a multi-billion dollar attack on the so-called infrastructure deficit.” That makes choosing the right procurement methods doubly important.

What accounts for the architectural genius of Frank Gehry? Our contributor Martin Laflamme provides an answer in a review of two new books on the Canadian-born architect. Laflamme notes that some of the earliest seeds were planted during Gehry’s early years in Toronto when the young boy erected structures out of wood scraps on the floor of his grandparents’ house on Beverly Street, just a few blocks away from the site of what would later be his main Canadian commission, the redesigned and expanded Art Gallery of Ontario. But the bulk of Gehry’s inspiration, it becomes clear, occurred after he and his family moved to Los Angeles, which has been his main base ever since.

And there is much more, Daniel Joseph conducts a tour of troubling new forms of labour exploitation in the digital age, Valerie Knowles takes a backward glance at the rise of the Canadian Pacific as a national institution, Stuart Thomson digs into the instrumental fantasies employed by rapper Rich Terfry in his new memoir, Ivor Tossell reviews the record of some of Canada’s worst mayors and Michael Dawe dissects the political overtones of our modern conception of the cowboy on both sides of the border. Ann Walmsley and Susan Walker review new novels by Lawrence Hill and Dianne Warren, and our poetry pages feature the works of Bruce Meyer, Lisa Martin, Benjamin Hertwig and Maureen Hynes.

Meanwhile, in this month’s letters section there are responses from Paul Conway on a review in the November issue by Naoko Asano, and by Thea Cacchioni and Jarkko Jalava, Stephanie Griffiths, and Michael Maraun on reviews of their books in the December issue.

As 2016 begins we look forward to a year of continued growth and change at the LRC. One of those changes, coming with the May issue, will be the ending of my interim editorship. Stay tuned for the announcement of exciting new permanent arrangements for the magazine’s editorial chair. In the meantime, happy reading.