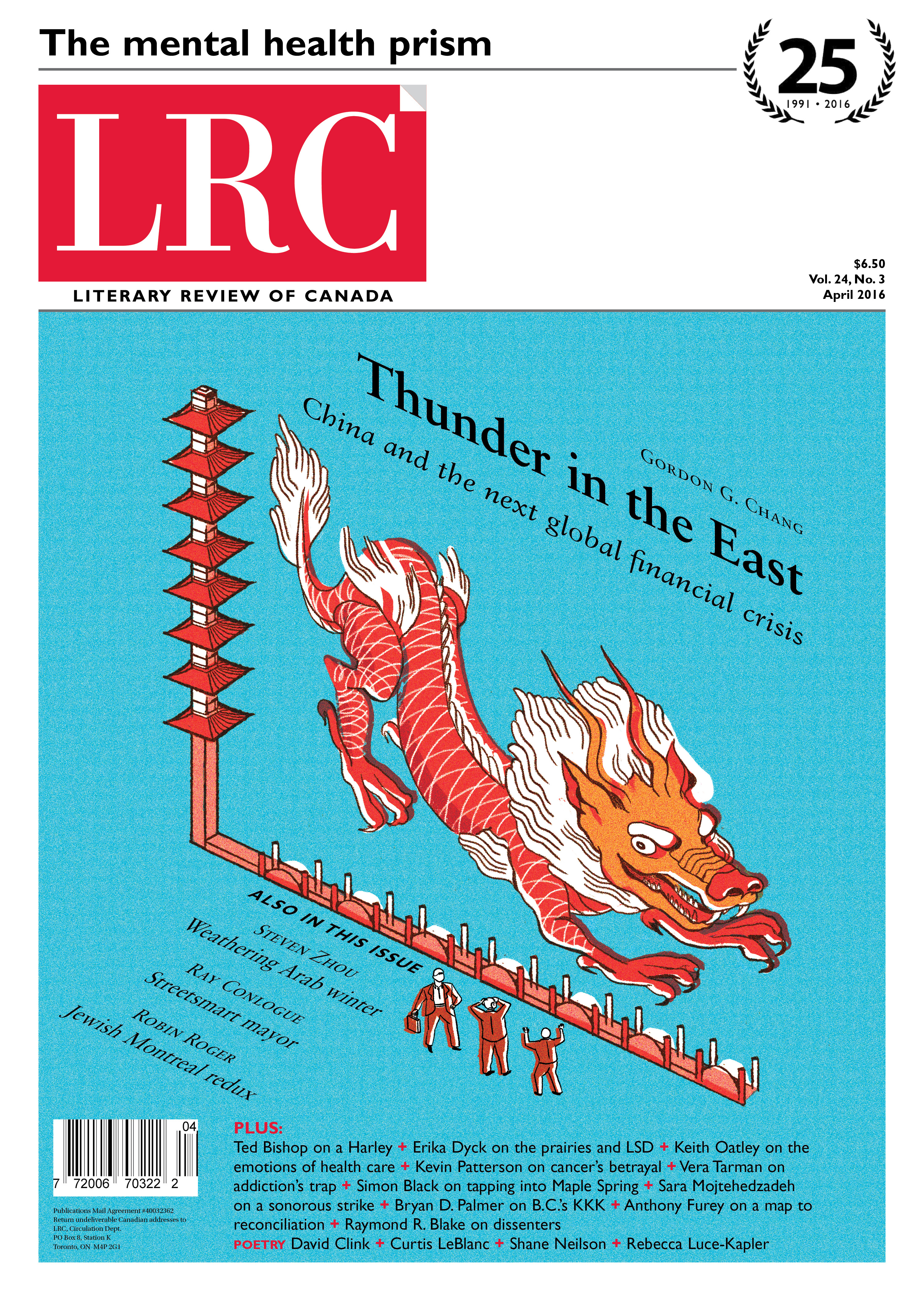 Welcome to the April issue of the LRC. Here’s what’s in store this month.

With the recent change of government in Ottawa, it is a useful time to take a fresh look at the international setting in which the Canadian government operates. The lead essay this month focuses on one of the most important trends in the current global context: the changes taking place within China. Our contributor, geopolitical expert Gordon Chang, sounds a decidedly downbeat note concerning the country’s near-term prospects: “The People’s Republic of China is now trapped in slow-burning economic and financial crises,” he argues, causing an expansion in internal political dissension, an increasingly aggressive outward stance, and a growing use of repressive measures. Where will this end? Chang makes the case that the People’s Republic is passing into a third stage of evolution. When compared with the regime’s initial Maoist stage and then the reform stage spawned by Deng Xiaoping, this imminent third stage will prove to be, in Chang’s words, “an especially turbulent and troubling one.”

And what of the threats posed by ISIS and other beneficiaries of instability in the Middle East? Our contributor, columnist and editor Steven Zhou, argues that a realistic assessment of unpleasant truths is necessary. “The world’s response to revolutionary Muslim terrorism has consisted of similarly revolutionary elements,” he observes. So far the evidence that this response has led to only modest results is legion. “Veteran journalists conclude that no military solution can be adopted to solve either ISIS or the bloody situation in Syria,” Zhou tells us. If that is the case, then what is the best stance available to countries such as Canada currently involved in military operations in the region? He provides a provocative conclusion. If recent events have taught us anything it is that “visions and plans for new sociopolitical realities in a particular country can no longer be brought about through the application of military force.” And that leaves only one other option. “Diplomatic efforts to end violence perpetuated by all sides is the alternative.”

From international trends, we move to one of the most significant questions facing Canadians closer to home. How best to lay out a road map that ensures Aboriginal peoples can overcome the injustices of the past? Our contributor Anthony Furey, in his review of a new book on this topic, provides a memorable quotation from the book’s authors Greg Poelzer and Ken Coates: “We as a people, or peoples, need to stop looking for a single, sweeping solution, whether it be constitutional change, a government program, or a radical overhaul of Aboriginal governance.” Furey agrees with this prescription as well as many of their specific recommendations, but notes that there is one lacuna in Poelzer and Coates’s analysis. “This is what precisely a post-reconciliation society looks like,” he notes. “There is great tension between two broad views. One is that aboriginal self-governance will flourish and the majority of reserves will grow as economic and political forces. The other is that aboriginal peoples are destined to further integrate into mainstream Canada, making their livelihood in non-aboriginal communities but maintaining their own culture.” It is only by facing the benefits and costs of each of these options squarely that a truly effective way forward can be fashioned, Furey argues.

Former Toronto mayor John Sewell’s new memoir cannot help but evoke a hint of nostalgia for many readers. “For those who were there at the time, and who were for that reason young at the time,” says Ray Conlogue, “it recalls mythic stories both numerous and potent.” Conlogue summarizes the highpoints of Sewell’s municipal legacy, while not shying away from some of the less impressive aspects as well. But overall his assessment is a highly positive one. “We live in a city much improved by Sewell’s policies,” he observes. “The progressive planners he brought to City Hall created the wonderful downtown we have today. Sewell did not do this by himself. But had he not been there, it is anybody’s guess what modern-day city might have been created instead.”

How should we view the history of mental health treatment? With more nuance than is now often the case, according to Erica Dyck. For many today, “the history of mental hospitals and the disordered minds and bodies captured within them represents a bygone era of backward thinking, incarceration and the so-called dark ages of psychiatry.” As a counterpoint, she summarizes a sympathetic personal account of the care provided by the mental hospital once located in Weyburn Saskatchewan. Comparing today’s treatments with those outlined in this account raises important questions, says Dyck. “What are the consequences of investing in a system that focuses on the responsibilities of the individual to stay on their meds rather than focus on a system that invests in the diversity of communities that are better equipped to embrace difference and nurture the kind of creativity that results from negotiating acceptance?”

Many Canadians are unaware that during the 1930s the Klu Klux Klan made occasional inroads in this country. Bryan Palmer catalogues one such case, which involved the town of Princeton in southern BC’s Similkameen Valley. In the 1930s a strike by the town’s coal miners led to a bitter struggle between communist organizers and the town’s capitalist establishment. The Klan’s arrival had predictable results, with cross burnings, beatings and anonymous threats. It is a chilling tale, which, in Palmer’s words “provides insight into how the Klan elements that on occasion made an appearance in this county extended their attacks against racial, ethnic and religious minorities into assaults on trade unionists and infamous ‘outside agitators’.”

And there is much more, Raymond Blake dissects the reasons behind Canada’s surprisingly dogged attempts to muzzle dissent during World War I, Ted Bishop takes us on a road trip with a motorcyclist intent on confronting demons from her past, Keith Oatley itemizes the interesting ways in which our relationships as infants affect our adult experience of the health care system, Kevin Patterson assesses a riveting new memoir dealing with cancer and its searing emotional effects, Vera Tarman introduces us to a fascinating new view of the causes of addiction, Simon Black explores the significance of protests by the millennial generation by highlighting the career of a student activist leader of Quebec’s Maple Spring movement and Sara Mojtehedzadeh chronicles a pivotal moment in the Canadian labour movement when one of the country’s largest primarily female occupations underwent a successful unionization drive.

On another note, after a year as interim editor of the LRC and a decade before that working in various editorial capacities, I am passing on the torch which I inherited from Bronwyn Drainie to well-known journalist and public servant Drew Fagan. Fagan will be gracing the editorial chair for several months. Stay tuned for the announcement of exciting new permanent editorial arrangements. In the meantime, happy reading.