To the exiled, the emigrants, and the displaced, a homeland can turn into a parent more powerful than any other. The desire to belong authentically to a nation, to align one’s identity markers and political ideals with its values, to be accepted by this authority and protected in return—it resembles the meaning one looks for in family. But how do you love a nation that betrayed, imprisoned, or otherwise hurt you and your loved ones? This is the question nagging at the heart of Djamila Ibrahim’s debut short-story collection, Things Are Good Now. These nine stories explore the impact of political instability on the lives of East African refugees and immigrants. Each of Ibrahim’s fictional characters intimately knows what it’s like to suffer in a world prone to sudden shifts: they often reference controversial global leaders, ethnic tensions, and religious strife, and their flashbacks reveal wartime victories and cruelties. Like abusive parents, the national boundaries of Ethiopia and Eritrea haunt their psyches and relationships constantly, as do the idealized and fallen futures represented by the carefully guarded gates of the west.

Born in Addis Ababa, Ibrahim has lived in Canada since 1990. Her author bio, otherwise sparse on detail, mentions that she worked as an advisor for Immigration and Citizenship Canada. It’s not surprising, then, that while her stories set out to cover a breadth of experiences, certain patterns stand out. First, nearly all of the collection’s protagonists are East African women, narrowing the focus to a particular junction of social struggle. Second, each of these women must reckon in some way with the conditions of her departure from her homeland in order to cope with the conflicts of her present world.

On the surface, the project abounds with literary promise. It bears all the signposts of work celebrated by post-colonial literature: identity-specific, intersectional writing based on the often-contradictory experiences of racialized populations; implying a struggle with, rather than a clean break from, the colonial. Ibrahim provides a diversity of perspectives in her narratives; the lower class, the middle-aged, the college student, the young wife, and the aging mother are all trying to balance traditional values, westernization, and nationalistic loyalty. “You already gave twelve years of your life to your country. What did it give you in exchange, huh?” a man asks his lover, Aisha, a soldier thinking of returning to the Eritrean resistance. In the title story, a former prisoner of Ethiopia’s Derg accuses her brother of abandoning his people. “Oh, I forgot. You are Canadian. You are beyond the petty skirmishes of savages in faraway lands,” she tells him. The wounds these characters inflict upon each other are deeply and explicitly connected to a sense of emotional allegiance to their roots. In “Children Always Stay,” Helen imagines her mother’s funeral, the body “reaching out into the soil of her birth like a fetus to her mother” and “folding into the warm embrace of her ancestors.” There’s an inherent value ascribed to the land of one’s origin, as though lineage transmits the essential knowledge of language and culture through one’s very bones.

In certain stories, this approach makes for a genuinely heartfelt narrative. “Not a Small Thing” centres on the dynamics between the unnamed narrator, a political science student in Toronto, and her best friend, Selam. At a party after their falling-out, the narrator receives a phone call informing her that Selam has been assaulted by a group of men who pulled off her hijab. Unwilling to discuss her friend’s experience with the others, who are white, the narrator silently reflects on their history together: “There was so much willpower and righteousness beating inside you, it radiated through your words, your eyes, your skin. Even back in high school, you wouldn’t allow anyone to demean you.”

This female kinship between Habesha women—that is, women descended from the Abyssinian peoples of the Ethiopian highlands—is about confidence and fearlessness, about being unapologetically black. But Selam’s decision to start wearing the hijab complicates the narrator’s perception of her. She can’t reconcile the outspokenness she admired in her friend with this new orthodoxy: “Why would a girl as intelligent as you waste her time with the irrational world of religions? Your obsession even scared me sometimes.” Framed through this conflict, Selam’s assault becomes a catalyst for the narrator’s reflection on her own Islamophobia, a development that risks coming off as prescriptive. Yet the strength of their bond carries the story to a deeply empathetic place. Their reconciliation is not just a product of their roots in a shared culture, but the need to see past those roots to the flawed people beneath.

In other stories, Ibrahim’s tendency to resolve religious, racial, and political complications results in artificially bow-tied plots. In “Spilled Water,” an Ethiopian child adoptee named Nebiyat recounts her first traumatic experiences in Canada. When she returns to visit her father in Ethiopia as an adult, she says, “I realized then that home and belonging would never be clear-cut notions for me…My heart and mind will always be vacillating between two possibilities, eyeing two realities at the same time. And I felt something like an acceptance, a new way of being in the world.”

And in “A Kept Woman,” Yasmin manages to leave her emotionally abusive husband to find refuge in her American friends, but worries that “she might drift so far away from her roots that she’ll lose sight of all that is also beautiful and true about her upbringing.” She conveniently goes on to remember “something Laura had told her about W.E.B. Du Bois’s book The Souls of Black Folk and the concept of double consciousness. And how this concept is sometimes applied to immigrants’ experience of feeling permanently in exile.” Yasmin decides, with the conclusiveness of a judge, that “even in exile, we sometimes stumble upon a path, a new way forward.”

Salman Rushdie’s Imaginary Homelands connects the migrant’s “looking back” to an irretrievable loss: “our physical alienation [from the homeland] almost inevitably means that we will not be capable of reclaiming precisely the thing that was lost; that we will, in short, create fictions, not actual cities or villages, but invisible ones.” To anyone born in a different part of the world, all these sentiments are familiar—many children of immigrants have heard their parents or grandparents iterate a version of nationalist nostalgia, though they might define their own feelings as closer to Nebiyat’s or Yasmin’s self-imposed “double consciousness.” But difference, the cause of alienation from the state and other imagined communities, asserts its importance in post-colonial writing precisely because its ache is felt differently by each person. Ibrahim’s desire for meaningful representations of Ethiopian and Eritrean women undercuts itself by presenting a too-neat binary: one can either disavow the dream of the west and repatriate the psyche to one’s origin, or resolve to live in a happily double-layered world that permits some acceptance of one’s new place in the west.

When Ibrahim delves into the reality of building a new life in Canada, her prose opens up, providing specific emotional insight that finally falls outside her cultural balancing act: “I’m tired of cleaning washrooms all day long. Eating, sleeping, a never-ending succession of empty days,” Aisha declares in “Little Copper Bullets.” In “You Made Me Do This,” a mother named Mariam points out “what Canada does to parents”: it “makes grown people feel as if they’re their own children’s understudies.” Mariam’s son Ismail is killed in a gang-related shooting in a Canadian city, leaving her to reflect on her decades-old experience of crossing the desert between Eritrea and Sudan while pregnant with him, in a desperate search for safety. That her son “had made it through her dehydration and exhaustion” only to die “in his prime and in this land of peace and plenty” is the most devastating aspect of her experience. And while this depiction of Canada as a differently hostile but still deadly place for refugees is crucial, the vehicle for its delivery is the same as for the work’s other revelations: a reflective “looking back” that conflates the homeland with the past and mines it for meaning.

The story form demands that the writer strike at human experiences in dissonant and surprising ways, in ways that don’t feel didactic or familiar. Things Are Good Now is a worthwhile read for its intimate investigations of global unrest, but as a work of fiction, its political intent is too often laboured, shadowing emotional realities with intellectual purpose. It sometimes leaves the reader with the impression that characters are locked away, awaiting their authorial utility, rather than wandering out in the world, trying to inhabit so many fluctuating ways of belonging.

Rudrapriya Rathore’s work has appeared in Joyland, Minola Review, This Magazine, Hazlitt, and the Walrus, among others. She lives in Toronto. 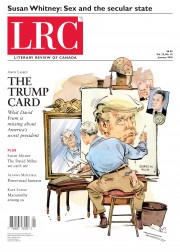