He Speaks Volumes: A Biography of George Bowering

It’s hard to avoid the word “prolific” when speaking of George Bowering, the writer par excellence of Vancouver. According to his biographer, Rebecca Wigod, the eighty-­three-year-old Bowering has produced 100 books, spanning every genre including lyric and long-form poetry, novels and short stories, memoirs, essays, and popular history — even a young adult novel, Parents from Space. “Sometimes it feels as if I have published more than I have written,” he has admitted in his droll way.

Not every one of those 100 books displays excellence. There is The Dad Dialogues, for example, a compilation of letters that Bowering exchanged with Charles Demers, a much younger papa, about the care, feeding, and adorable doings of their infant daughters. It reminds you of those besotted bores who sit next to you on long flights and insist on showing you baby pictures of their children or grandkids. But Bowering’s talent shines bright in books such as Kerrisdale Elegies, his semi-­fictional memoir Pinboy, and the novel Shoot! Moreover, he has won Governor General’s Awards for both poetry (Rocky Mountain Foot and The Gangs of Kosmos) and fiction (Burning Water), a feat only Margaret Atwood, Douglas LePan, and Michael Ondaatje have matched.* 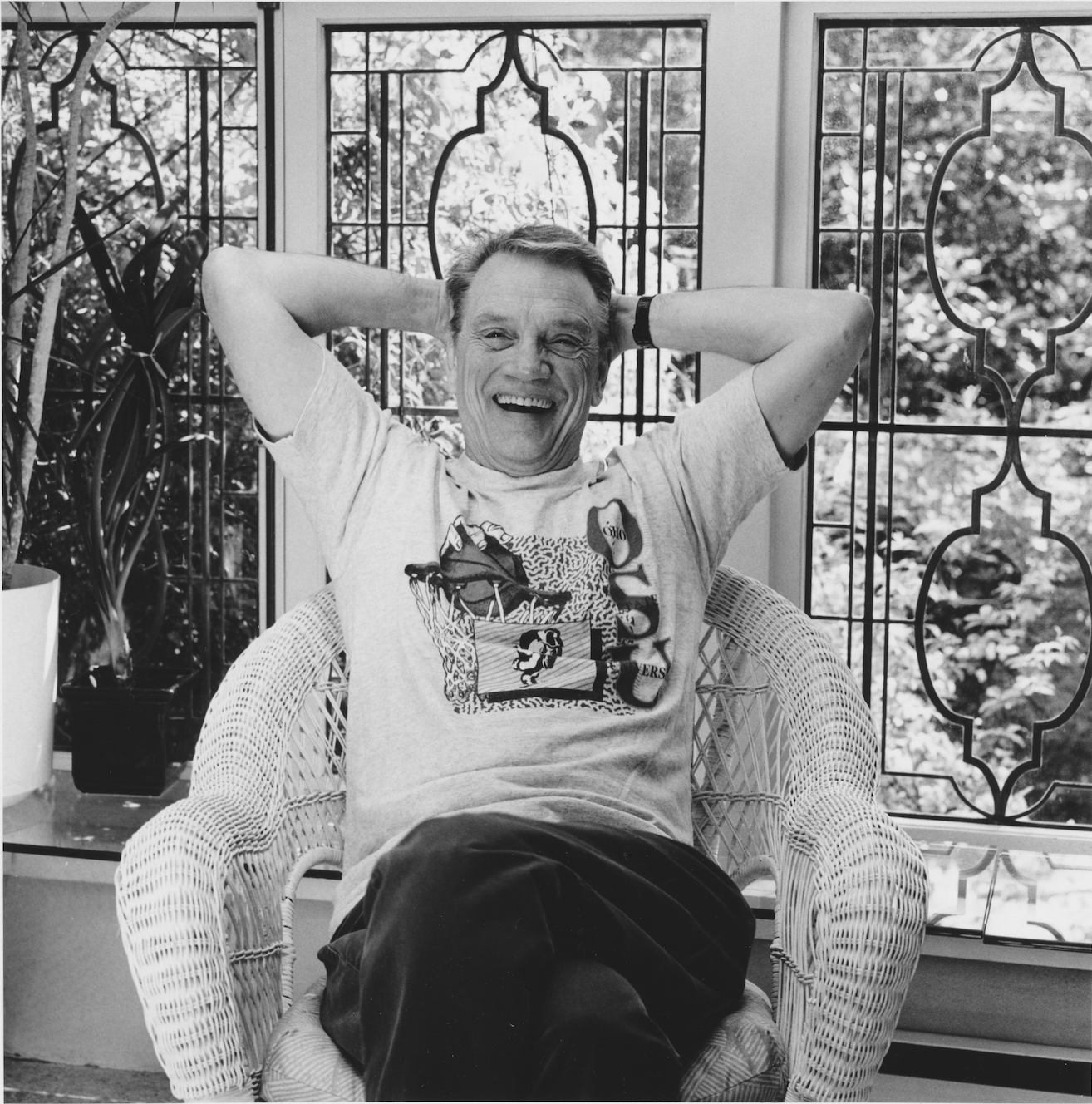 Wigod had a thirty-­year career in print journalism, in Australia, New Zealand, and Canada, ending up as books editor at the Vancouver Sun. In He Speaks Volumes, she explains that she was attracted to Bowering’s life story by his “giant, varied oeuvre” and his “capering personality.” Indeed, he had enough capering personality to animate a whole troop of writers and sometimes wrote under pseudonyms, including Helmut Franz, Erich Blackhead, E. E. Greengrass, Edward Pratoverde, and Ellen Field.

Bowering’s meticulous self-­documentation makes him a biographer’s dream. Since the age of twenty-­two, he has kept a journal that now runs to fifty volumes, with clipped book reviews and correspondence (both received and sent) with Ondaatje and Atwood, along with Margaret Laurence, Al Purdy, Allen Ginsberg, Greg Curnoe, and countless others. At thirteen, he began recording the titles of all the books he read — a list that now totals more than 6,000.

George Harry Bowering was born in 1935 in Penticton, in British Columbia’s Okanagan Valley, to nineteen-­year-old Pearl Bowering. His father, Ewart Bowering, had been Pearl’s high school chemistry and math teacher and would later teach George. The first of four children, George grew up mostly in the town of Oliver, amid sagebrush and rattlesnakes. In the Okanagan, everybody knew the order in which the tree fruit ripened, starting with cherries and ending with apples, and at one time or another, almost everyone picked fruit or worked in the packing sheds. The children were free to explore and wander, but they were also expected to do chores. George was, according to Wigod, a firecracker of a boy — the class clown who loved to play baseball and hoovered up adventure stories, westerns, sports stories, and science fiction from an early age. He wanted more than anything to be a sportswriter; while still in high school, he covered baseball for the Oliver Chronicle and the Penticton Herald.

Memories of his sunny childhood, especially of the natural world he encountered in the Okanagan, formed what Bowering has come to call his “biotext,” an inexhaustible storehouse of feelings, connections, and imagery that has ­nourished his writing. His first truly successful poem, “Grandfather” (included in thirty-­one anthologies at last count), draws on a visit to see his snowy-­haired grandfather, “whipt out of England” as a twelve-year-old orphan. Jabez Bowering built “children & churches” across the prairies until “lord god almighty / struck his laboured bones with pain / & left him a postmaster prodding grandchildren with crutches.”

After high school, George pursued his girlfriend Wendy to Victoria, where she was attending teachers’ college. When she finally broke off the relationship, he joined the Royal Canadian Air Force and became an aerial photographer, based in Manitoba.

Three years later, in 1957, he moved to Vancouver to attend the University of British Columbia, studying history and English literature. He has said that seeing the library stacks at UBC made him dizzy. He continued to write, sending poems out to every little magazine he could find. His timing could not have been better, because the city was then emerging as a poetry hot spot. Warren Tallman, a charismatic professor from Washington State, had recently arrived with his wife, Ellen, who knew all the avant-­garde poets in San Francisco. In 1960, Tallman began teaching from The New American Poetry, which had just come out, and gradually found ways to bring its anthologized poets to Vancouver for readings, talks, and workshops.

Inspired and energized, UBC’s student-poets — including Bowering, Lionel Kearns, Fred Wah, Frank Davey, Jamie Reid, and Gladys Hindmarch* — founded TISH in September 1961. (The free newsletter’s name, an anagram of “shit,” came from Robert Duncan, a gay poet from San Francisco who had been raised by theosophists to believe in mystic signs and omens.) All his life, Bowering would remain a supporter of little magazines and small presses, knowing them to be essential to poets. He also remained friends with the members of the TISH group, whose ideas gradually spread out like ripples from a stone tossed in a lake.

The culmination of these transborder contacts came in summer 1963. The seminal Vancouver Poetry Conference brought together a constellation of talents, including Denise Levertov, Margaret Avison, Robert Creeley, Robert Duncan, Charles Olson, and Allen Ginsberg. Forty-­eight students registered for the entire three-week program (Bowering among them), but anyone from the public could buy tickets to individual sessions. Many did. “Vancouver’s summer of poetry was no flash in the pan,” Wigod writes. “Instead, it’s legendary for poetry the way Woodstock is for music.”

The American poets introduced a new vision. They advocated line measures based on breath, and they preferred plain conversational language without metaphysical baggage, classical references, or even similes. They urged the younger poets to pay attention to their place, to write about their surroundings, and not put egos front and centre as, for example, Irving Layton was then doing in Montreal.

All his life, Bowering would remain a supporter of little magazines and small presses, knowing them to be essential to poets.

When Bowering was not participating in a cultural revolution, he was pursuing amorous adventures. Wigod traces his courtship of Joan Huberman, the sexy, bohemian daughter of a musically gifted European family. The two lived together until Joan confessed one night that she had slept with another man, and the devastated Bowering set off to jump from the Burrard Bridge. Lionel Kearns found him on the bridge and brought him home.

While working on his master’s at UBC, Bowering met Angela Luoma, a third-year student of Finnish and Scottish ancestry, whose pale blond hair and green eyes captivated the young poet. They married in 1962 and the following September moved to Calgary, where Bowering obtained a job at the University of Alberta. There he started Imago, a magazine dedicated to long poems, and produced twenty issues over the next decade, building an international network of poets along the way. In Calgary, Bowering missed the cultural life of Vancouver, writing to friends that the closest thing he could find to an art gallery was a local ­framing shop.

After a couple of years, when Bowering decided to take his PhD at the University of Western Ontario, he and Angela packed up and moved to London, where they became friends with the artist Greg Curnoe. Bowering dropped out of the doctoral program when he was offered a job at Sir George Williams University in Montreal. It was there that the Bowerings’ marriage began to curdle, after George had an affair with the English department’s receptionist.

The Bowerings had returned to Vancouver, and George had begun his long teaching career at Simon Fraser, when Angela gave birth to their beloved daughter, Thea, in 1971. But the couple were soon at war. He had flagrant affairs, including with Connie Rooke, the gifted editor of the Malahat Review and likely the love of his life.

Angela, for her part, screamed obscenities at her husband in front of their friends. She was a heavy smoker and refused for long periods to clean their house, which had become coated in grey. She often failed to prepare meals for their daughter, who had to fend for herself when George travelled. Because of Angela’s habit of never putting caps back on bottles, the little girl once drank furniture polish and had to be rushed to hospital. Wigod describes some of these details in the book; others are readily found in Bowering’s own writings. And she quotes the couple’s friend Brian Fawcett, who described the relationship as “the worst marriage I’d ever even heard of . . . Their emotional energies were utterly different.”

He Speaks Volumes casts Angela Bowering as a harridan, with few redeeming features. Perhaps a more nuanced portrait would reveal a troubled but intelligent woman, who was forced to suppress her own ambitions. Wigod doesn’t explore Angela’s psyche, however, nor does Bowering, who wrote in The Dad Dialogues, from 2016, that “Angela had lots of meds because she had been seeing her shrink for a decade.” He states that he does not believe in the subconscious.

In the early 1990s, Angela developed multiple sclerosis and was often racked with pain. Then, in 1996, she was diagnosed with a rare gynecological cancer. Illness brought her and George close together again. She died in 1999, at fifty-­nine. After thirty-­six years of an exhausting marriage, George composed some of his tenderest poems about her. In Imaginary Poems for AMB, he describes the new century as what “we all wanted you to / see, those eyes wide / & still green after all / these tears.”

It was around the turn of the century that Bowering published three popular histories: Bowering’s B.C.: A Swashbuckling History; Egotists and Autocrats: The Prime Ministers of Canada; and Stone Country: An Unauthorized History of Canada. These brought him a new audience and may have been a factor in his appointment as the first Canadian parliamentary poet laureate, in 2002.

In 2006, Bowering married again. Jean Baird, a baseball fan with a PhD in English literature, has brought order and peace to his last decades and has helped him continue writing. After a cardiac arrest caused him to collapse on the sidewalk near his home in 2015, he says his life now is in extra innings.

Rather than follow a straight chronology, Wigod has structured her biography thematically, around the genres that Bowering has explored in his writing (such as “The Poet,” “Mr. Baseball,” “The Novelist”). This necessitates a fair amount of irritating repetition that gets in the way of the story. Nonetheless, Wigod has written a valuable account of a rare and gifted personality, while describing the shifting currents of post-war Canadian culture.

He Speaks Volumes documents more than a life: it recaps many of the literary feuds that once animated this country. Should Warren Tallman serve on the Governor General’s Awards jury, even though he was a U.S. citizen? Was the ramshackle Milton Acorn more deserving of a prize than his ex-wife and fellow poet Gwen MacEwen? It’s now hard to believe how many intemperate letters and declarations were exchanged over such questions.

George Bowering played an important role in this literary history, though he wore his role as he wears his learning: lightly. Critics and some readers have been irritated by his jokiness, his idiosyncratic spellings, his duck neckties. But these now appear to have been his way of blurring distinctions between high and low culture. His intentions were always serious; he has said that his intent has been to “not shame the language.” And he hasn’t.

* The print edition of the July/August issue omitted reference to Douglas LePan. It also spelled Gladys Hindmarch’s surname as “Hindmarsh.” The LRC regrets the errors.