I first got to know Susan Benson over the many years I reviewed the Stratford Festival, starting in 1976 (during the long-vanished golden era of Robin Phillips). The celebrated British designer was already putting her stamp on Canadian theatre, opera, and ballet, and my admiration for her work resulted in a fairly extensive personal collection of her renderings. When the theatre designer Michael Eagan viewed some of my framed Bensons, he singled out her rendering of Fenton, from The Merry Wives of Windsor, in 1982. “This costume design is worth your entire collection,” he said. “Besides the fine modelling of the figure and face, the subtle colouring seems to be there and not be there.”

Eagan was spot-on: Benson renders Fenton with black ink and watercolour. The delicate accuracy of her fine lines — along with her cleverly restrained use of muted earth tones for Fenton’s cloak, jacket, pleated trousers, boots, and hat, finished off with just two touches of light blue florets — shows how a gifted artist can capture character through costume design. In this piece, she combines fine portraiture with practical illustration for her cutters and embroiderers in their workrooms.

Unlike many other renowned ­designers — Tanya Moiseiwitsch comes immediately to mind — Benson always produces fine art. This is true whether she is sketching a hat or turban (The Summoning of Everyman), a giant masquerade mask (Romeo and Juliet), a cape (The Golden Ass), a huge door with carved birds of prey (Julius Caesar), a doll (The Crucible), a concept study (for an alternative production of The Mikado), preliminary set ideas for The Woman, a storyboard for The Magic Flute, or exquisite scenery based on Fragonard and Watteau (The Marriage of Figaro). 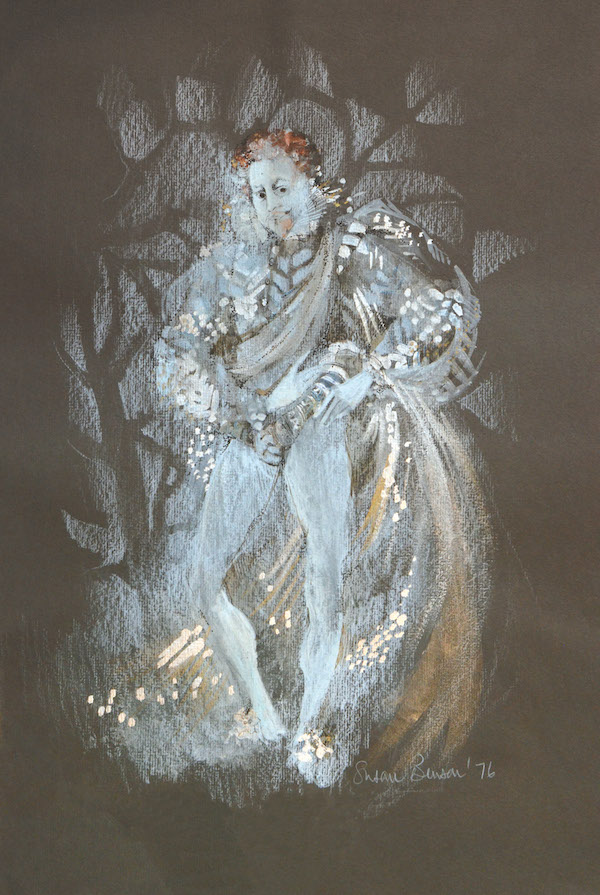 In an earlier time, Moiseiwitsch — who designed the stage architecture at our Stratford Festival and set the standard for its costumes and sets — always had a “functional context” for her costume designs, according to a 1994 book published for an exhibition of her work. The drawings were her “mute instruction,” meant only for the walls of the workroom, not the museum. They bore evidence of “hurried execution. . . . Figures often seem stiff, with elegant composition giving way to a detailed description of a ruffle or sleeve.” Moiseiwitsch never thought of her sketches as art; she had trained at the Central School of Arts and Crafts in England, but it had no courses in theatre design as such and none in scenic design while she was there. She produced what seemed to be real clothes rather than costumes — which served plays superbly. But her renderings are not sophisticated as drawings. They certainly are not aligned with Benson’s idea of the designer as “primarily a visual artist and not a technician.”

Before my first visit to Benson’s Stratford home, which she shared with her artistic and life partner, the extraordinary lighting designer Michael J. Whitfield, she patiently drew in ink a lovely miniature map for me to follow. It’s still buried somewhere in my theatre archives. I had come to view what she had for sale, and I recall her sitting on the floor, with a small fan beside her to divert chemical fumes from her nostrils as she painted costume designs for a production of Macbeth (or possibly The Woman), employing a technique of controlled dribbling of thin, viscous oils onto gessoed board and then wiping and sponging them away. Benson’s use of various artistic materials and styles stamps her as an experimenter. Patricia Flood, her assistant at Stratford and a reputable scholar of design, writes in Susan Benson that her varied techniques result in evocative costume sketches “with little detail but a rich sense of the feeling for the texture in the clothing.”

Various artistic materials and styles stamp Susan Benson as an experimenter. Hers are evocative costume sketches.

Benson does not see her sketches as simple guidelines for construction, Flood points out. Instead, she sees them as “a way of communicating her understanding of the characters in the play.” Her renderings are “a creative means of expression and exploration” — to be later interpreted by “many talented cutters, jewellers, milliners, painters and dyers.” Referring specifically to Benson’s sketches from Macbeth and The Woman, Flood notes, “These are highly evocative costume renderings where fabric and accessories are suggested but open to interpretation. This approach allows others to bring their own vision to the final realization of the costume.” Such interpretive freedom is something that a Leslie Hurry, or possibly even a Desmond Heeley, would not have allowed.

Underpinning Benson’s renderings is the radical idea of performance as a “moving painting.” We see it in her designs for Brian Macdonald’s send-ups of Gilbert and Sullivan from the early 1980s: The Mikado, The Gondoliers, and Iolanthe, all of which capitalized on her fresh re-versionings of British satire through clever modifications and transformations. She blends Japanese woodcuts with early twentieth-century art nouveau in the first instance, English pantomime with commedia dell’arte in the second, and the theatricality and stage effects of Victorian theatre and English music halls in the third.

Born in Kent in 1942, one of two children in a family that loved theatre, Benson was steeped in the arts from an early age. Her father wrote ­comedy scripts for the BBC and for well-known comedians, and her mother (a director and writer) ran a theatre school and coached aspiring thespians to enter the London Academy of Music and Dramatic Art and the Royal Academy of Dramatic Art. Her maternal grandmother was a professional actor. At fourteen, Benson visited a great-aunt in Stratford-upon-Avon and was thrilled to see productions by the Royal Shakespeare Company. She even trained as an actor, but her true love was always design.

Benson produced her first design at age twelve, for her mother’s adaptation of Alice through the Looking-Glass. At fifteen, she began formal art training, and at nineteen she gave up acting to study painting. “The choice to train as a painter,” comments Flood, “meant Benson always thought of herself as a fine artist who chose theatrical design as an outlet for her creativity.” The head of the painting program at the Wolverhampton College of Art made students, in Benson’s words, “take time to look at shape, line, colour, proportion and rhythm.” Being compelled to study and understand the body made her aware of the subtleties of colour and shape — all very useful later for costume fittings.

Aware of the paths Tanya Moiseiwitsch and Lila De Nobili had opened for female designers, Benson worked at the RSC and the BBC before arriving in Canada in 1966, where she collaborated with a wide range of internationally renowned directors, actors, and choreographers at the Banff Centre, the Stratford Festival, the Canadian Opera Company, and the National Ballet of Canada. She went on to work with many theatre and opera companies in the United States, too. Like all the best designers, she learned from earlier experts — like John Bury and Desmond Heeley — the ways of fabric manipulation and of making wigs, jewellery, and hats. Despite a soft voice and natural empathy for fellow artists, she earned the nickname Basher Benson, because of her innate toughness, fortitude, and stamina.

This is no simple souvenir or illustrated catalogue, as books on Canadian and American stage design often are. Nor is it a coma-inducing academic study.

Decades ago, I pitched a coffee-table book of Canadian costume design, to be graced with sketches in full colour from Moiseiwitsch, Hurry, Heeley, Benson, and others, but I was quickly dissuaded from the folly of such extravagance. Publishers warned me that the production budget would never be earned back, let alone result in any financial profit. Hurry and Moiseiwitsch, along with Cameron Porteous, went on to have handsome exhibition catalogues showcase their work, and now Benson has finally earned a gorgeous book of her own.

This is no simple souvenir or illustrated catalogue, as books on Canadian and American stage design often are. Nor is it a coma-inducing academic study. Benson has the eye, hand, and soul of an artist, and her every design decision, as the book jacket puts it, is “filtered through that sensibility.” Fully aware of the proper homage she owes to her subject, Patricia Flood allows Benson to explain many of her own designs and to pay her own special tribute to Cynthia MacLennan (head cutter at Stratford), while Louise Guinand, a lighting designer, pays hers to her colleague Whitfield. Perhaps this is a bit of sentimental back-scratching, but it is justified, as is a full-page note from the costume painter Lisa Hughes: “Susan always inspired me and everyone else to be creative and ­innovative.”

Susan Benson: Art, Design and Craft on Stage features a lavish layout and design by Scott McKowen (who designed my biography of William Hutt two years ago). Flood’s informative essays address Benson’s formative work and her theory of design (for plays, operas, and ballets), as well as her problem-solving methods. But best of all are the sketches themselves, particularly the black and gold costumes for A Midsummer Night’s Dream, where the courtiers and the fairies were reflections of one another; the acid-toned hues spreading into the chalky-faced characters in Cabaret ; the long, flowing robes in subdued colours for Madama Butterfly’s Cio-Cio San; the sumptuously gilded world of shadows and underlying darkness that was true to John Cranko’s complexly corrupt society in Romeo and Juliet ; and the imperishable designs for Gilbert and Sullivan operettas that provoked much more than “modified rapture.” The proper tribute to any great theatre designer or fine artist is a great art book — which this one certainly is.