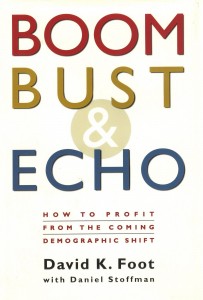 In the mid-1990s, my friend John Macfarlane encouraged me to submit a proposal for a book about what survey research was revealing about social change in Canada. I dithered for a while but eventually submitted an outline. I was too late: John liked my proposal but had already committed to another author whose planned book about big-picture social change seemed too similar to my own. It turned out that the other author was a University of Toronto academic named David Foot, who went on to produce (with journalist Daniel Stoffman) Boom, Bust and Echo: How to Profit from the Coming Demographic Shift. John stuck to his deal with Foot, a decision that turned out to be one of those lovely instances where a principled choice also turns out to be highly remunerative. Boom, Bust and Echo sold over 250,000 hard cover copies and remained on the bestseller list for two years.

Foot introduced the reading public to demography, the study of human populations. The book was initially aimed at a business audience of planners and marketers, but it turned out to have wide appeal among a general readership that wanted to understand their society and how it was changing. Foot claimed that demography explained two thirds of everything, that this statistical science is the most powerful tool for understanding the past and forecasting the future. Who could resist looking into the crystal ball?

Before Boom, Bust and Echo, books about Canada were mainly about its history and politics, specifically the leaders and elites who supposedly drove events. Boom, Bust and Echo was about all Canadians, not just the best, brightest, richest, and most powerful, but the power of all of us together. In Foot’s analysis, Canadians at large were at least as interesting as their leaders—maybe more so—and their decisions and behaviours as workers, consumers, and citizens deserved serious attention. Not everything Foot predicted came to pass but enough did to give demography new potency—even some intellectual sex appeal, of the kind economics has traditionally assumed—as a tool for understanding the world. Boom, Bust and Echo was an important milestone for Canada and for everyone who seeks to understand this country.

Michael Adams is the president of the Environics group of research and communications consulting companies which he co-founded in 1970. He is the author of six books, most recently Unlikely Utopia: The Surprising Triumph of Canadian Pluralism (2007).