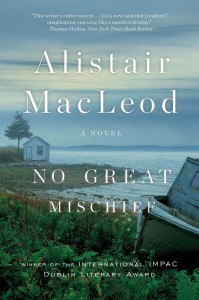 This is not the cockiest novel of the past 25 years, not the most dazzling, not the most ambitious in structure and technique. But I can think of no work of Canadian fiction that is more humane and, in the end, more heartbreaking.

MacLeod writes about duty and family love, loyalty and failure. In the memorable character of Calum, the narrator’s brother, he portrays a brave and broken alcoholic who must never be looked down on. The novel inquires about the hold the past exerts on us, and the terrible loss we suffer if we turn our backs on it. This is also an intimately Canadian book—from the northern mines to the “new and hopeful Calgary,” the slums of Toronto to the farmlands of southwestern Ontario, and to the novel’s spiritual home, Cape Breton Island.

It is also magnificently written. Some of MacLeod’s sentences are understated poetry in motion: they carry the plot, convey the book’s themes, yet they also shine for the sheer grace of language. How many other novelists render our country so vividly? “Out on the island the neglected freshwater well pours forth its gift of sweetness into the whitened darkness of the night.”

This is, I admit, the kind of book that is sometimes sneered at today: its characters are white, its settings are mainly rural, its values are traditional, its mood is often dark. But anyone who sneers at No Great Mischief is deeply and ignorantly wrong.

Mark Abley is an award-winning author, poet, and newspaper columnist. His latest work is The Tongues of Earth: New and Selected Poems (2015).