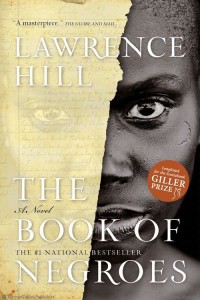 Lawrence Hill’s The Book of Negroes delivers exactly what we look for in the best historical fiction: it takes us into the life of a compelling character caught up in the dramatic events of her time and through that lens allows us to understand those events in the most visceral way.

The book takes its title from an actual historical document, the British Navy’s list of 3000 Blacks who served on the British side during the American Revolutionary War and who, at its end in 1783, fled Manhattan for Nova Scotia. Through an intimate portrait of the life of one remarkable woman, Aminata Diallo, Hill shines a light on this forgotten chapter of Canadian history in the context of a sweeping story that encompasses three continents. Abducted as an 11-year-old from her West African village, Aminata is sold into slavery on a plantation in South Carolina. Abused, then sold away from husband and child, she is taken to Manhattan by a new master. There, during the confusing early days of the revolution, she escapes to freedom supporting herself with her skills as a midwife, and her closely guarded ability to read and write. Taking ship for Canada with the British at the end of the war, she discovers life for freed Loyalist slaves in Nova Scotia to be harsh and oppressive. She returns to Africa with a group of other freed slaves, in what turns out to be a harrowing failure to build a new life of liberty in Freetown. Abandoning that, she accepts passage to London where she is taken up by the British abolitionist movement, for whom she becomes a powerful spokesperson.

A remarkable story that helps to illuminate how Canada is implicated in the history of slavery and its aftermath in North America.

Grace Westcott is a commercial lawyer with a boutique practice focusing on copyright, media, and the cultural industries. She is also Vice Chair of the Canadian Copyright Institute.