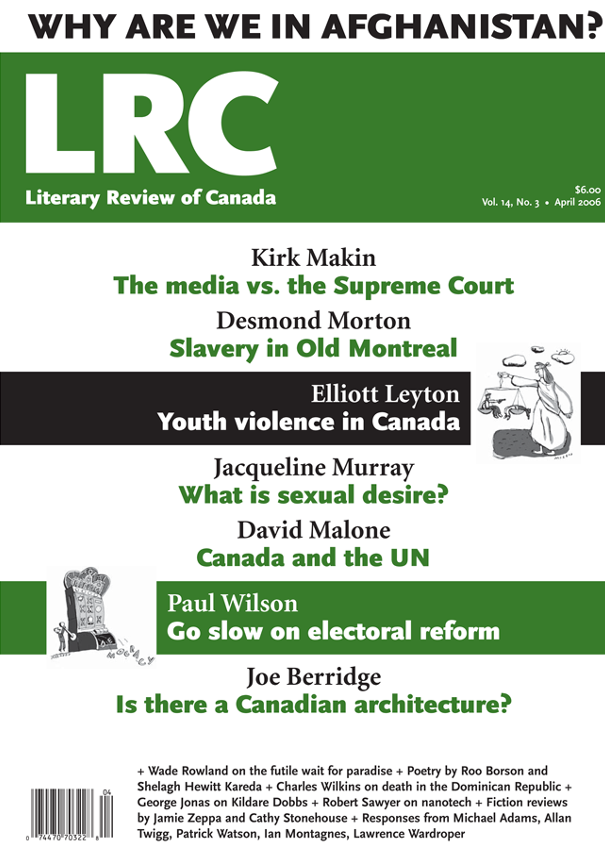 Re: “Not So Fast, Reformers,” by Paul Wilson

Paul Wilson’s essay is correct in many ways but missing some of the most potent criticisms of the pro- posal to change to a proportional representation voting system in Canada.

A PR voting system is aimed at correcting a usual 10-15 percent error rate in election results. What proponents of PR usually fail to note is that quite often the ruling party is the second-choice party of many of the opposition parties’ support- ers, and as a result the error rate likely has little signiﬁcant impact in terms of the actual decisions and actions of governments. (Wilson addresses this point more generally in his discussion of the meaning of “representativeness,” and he correctly points out that the impact on governance is not fully provable in any case.)

Proponents of PR will contest Wilson’s citing of the claim that the coalition governments usu- ally formed by PR systems are unstable. Wilson would have been better to leave this often-used but unproven criticism of PR out of his essay, as he does list many other proven negative impacts of PR.

Re: “Mystery in the Tropics,” by Charles Wilkins

It is rare that a writer is given an opportunity to respond to reviews, and I will try not to abuse the privilege by being thin-skinned. On the question of whether I as a writer have “the authority even to consider forgiveness” for my uncle’s long-ago assassination, for example, I will only say that in doing so I join hundreds of thousands of people worldwide who believe that, through processes of truth and reconciliation, questions of forgiveness and impunity are worth pursuing without relent.

What I must address more strongly is the suggestion, in an otherwise thoughtful and informed review, that my ﬁnal “speculative account” of Father Arthur’s murder amounts to “invention of the ‘facts’.” It is extremely important, particularly as the controversy surrounding James Frey’s A Million Little Pieces threatens to consign narrative non-ﬁction to a purgatory between truth and lies, to differentiate among that which is invented, that which retains an element of speculation but is supported by witnesses and documentation, and that which is provable beyond dispute. The account Mr. Wilkins refers to contains nothing invented. It would be better characterized as a summary of the facts and evidence gathered to that point, most of which can be traced to revelations earlier in the book. From the phase of the moon to the order of shots ﬁred to the psychological reactions of the men involved, the passages described by Mr. Wilkins are the product of research, not imagination. “The ultimate acceptance of uncertainty,” about which I am in accord with the reviewer, does not preclude the making of a case that is amply supported and defensible.

I write in my Notes & Acknowledgements for Dead Man in Paradise that “Records, interviews or personal observations support every detail presented as fact, and I have taken pains to ensure that speculation is identiﬁable as such.” In the case of the chapter referred to by Mr. Wilkins, I may have taken too many pains. Always wiser, I think, for a writer to question his own clarity than to cast doubt on his reader’s sensitivity.