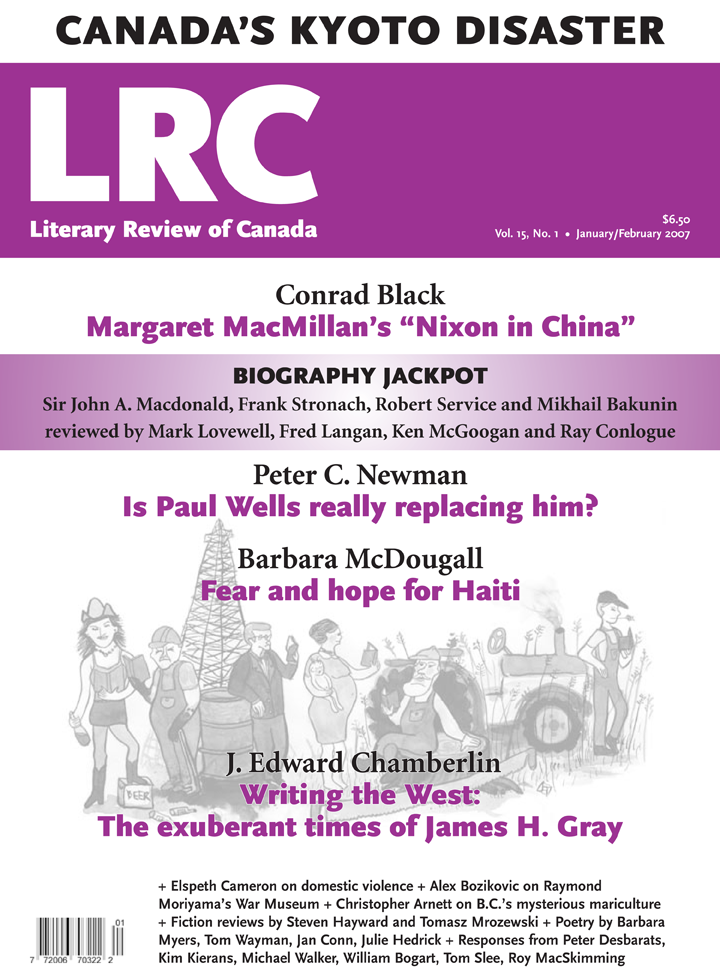 Re: “A Fascinating Snapshot,” by Conrad Black

On rereading my review of Margaret MacMillan’s book on President Nixon’s visit to China in your last issue, I find that although I expressed my liking and admiration for the author and for this book, the tenor of part of my review was one of inadvertent condescension. That is entirely inappropriate and was unintentional, but I apologize to Margaret MacMillan for the slightly patronizing tone of several sentences in my review. Of course, I have no standing to take any such stance with her, and it is an unbecoming attitude at any time. If I had reread sooner and more carefully what I had written, I would have altered the tone to indicate more clearly the very high opinion I had of the book, despite certain minor concerns. I emphasize that it is an excellent and interesting book, as this author always produces. I have apologized to Margaret MacMillan in person, but wished to do so before all your readers as well.

Although Mark Jaccard attempts to present a picture of sober and hard-nosed assessment, his reasonable tone does not obscure the fact that he has missed the boat entirely with his claims about Canada having done nothing about its Kyoto targets and our climate change challenge in general. From start to finish, he tempers what otherwise would sound like reasonable advice.

Having served on the Intergovernmental Panel on Climate Change, been an advisor to the Chinese government and even been consulted by our very own Cross-Country Checkup, he is clearly an acknowledged expert on climate change. However, he discusses “our country’s policy catastrophe” but ignores the real catastrophe, which is that he, along with those whom it benefits in the short term, does not entirely buy into the real threat of climate change. I quote: “Canadians should be demanding of their politicians if they wish to see their country make a contribution to the global effort to address this potentially grave threat to the planet” [my italics]. “Potentially” means he hasn’t accepted this threat completely.

He speaks of how the United States and Australia, as examples of countries in situations similar to Canada, have “aggressively and successfully negotiated less ambitious targets” [my italics]. Successfully? Mr. Jaccard does not get it. Laughably, he applauds the federal Conservatives and Alberta’s enthusiasm to “move beyond the tight Kyoto timeframe to discuss policies that will cause significant reductions in greenhouse gases over a period of several decades” [my italics].

We don’t have decades to build policies and take action. This is like listening to one of Sir Humphrey Appleby’s speeches in a Yes, Minister episode: We take this very seriously and will devote our full attention to it (which means: if we wait long enough, the problem will go away or the government will change). So why does Mr. Jaccard take this position?

Re: “Our Poorest Neighbour,” by Barbara McDougall

Barbara MacDougall’s review of Haiti: Hope for a Fragile State displayed a giant lacuna on the role of the United States in Haiti.

Let’s begin with her commentary on the presidency of the former leader of Haiti, Jean-Bertrand Aristide, who was Haiti’s first democratically elected leader, by the people of Haiti, on two occasions.

Before he had finished his first term of office he was ousted by the first George Bush, which resulted in sufficient anarchy and chaos in Haiti that refugees began making it to the shores of the United States. This prompted Bill Clinton to facilitate the return of Aristide to Haiti.

After Aristide was elected a second time, the second George Bush, like his father, arranged a coup to remove him from office. You will recall the sorry pictures in the media of Colin Powell attending at the airport in Haiti to oversee Aristide’s removal to Africa. What is most embarrassing for Canada is that under the Paul Martin government we participated in that coup. Our motives were to mend fences with a U.S. still angry over our non-participation in Iraq and it represents the first time in our history that we have engaged in colonialism.

MacDougall characterizes it this way: Aristide was a strong-man who was “finally ousted in 2004 after two kicks at the presidential can.” She displays in this comment a sad mixture of paternalism and contempt for the democratic process.

MacDougall also fails to mention that the U.S. under Woodrow Wilson occupied Haiti in 1915 and ruled by military government until 1934. The Americans took complete control of the economy and drafted a constitution allowing foreign landownership. They made sure Haiti met its foreign debt payments—mainly to U.S. banks. When the U.S. left, the only cohesive institution in Haiti was the military—with predictable results.

Toward the end of her commentary, MacDougall asserts that U.S. friendship is essential in Haiti’s future. There was a time when Haiti was self-sufficient in rice production, its staple food. Now all of its rice comes from the United States. This is no accident. Using politics and military might to steal markets is not friendship.

The newly elected president of Haiti is René Préval. Préval was a staunch and loyal supporter of Jean-Bertrand Aristide. He won the election even though the small wealthy elite in Haiti supported by the U.S. did everything it could to prevent Préval supporters from getting to the ballot boxes on election day. The U.S., for now, has acquiesced in the result, preoccupied as it is with affairs in Iraq.

Many years ago James Laxer said that the U.S. has a history of treating Central and South America as its own private preserve. Little has changed, except that some countries are managing to struggle onto their own feet while America’s attention is diverted elsewhere. If the U.S. stays diverted and leaves these countries on their own, then perhaps there will be reason to hope for a better future even for Haiti.

Re: “The Entrepreneur from Central Casting,” by Fred Langan

Fred Langan’s review of Wayne Lilley’s biography of Frank Stronach is almost as misleading in the discussion of multiple voting shares as the book itself. While the author and reviewer make it clear that dual voting shares are legal, the entire tone of the discussion is that there is something unsavoury about them—that while they are not illegal, they are certainly immoral, primarily because they allow the owners of the multiple shares to control companies with ownership of a very small proportion of the equity. They don’t seem to know that the concept dates back to the happy days when policy makers in Canada were concerned with keeping control of Canadian firms in the hands of Canadians. Dual shares were introduced so that Canadian entrepreneurs could raise capital without selling control of their companies to foreign investors. The staff of the Royal Commission on Corporate Concentration, 1976–1978, reviewed the concept in detail and its value to Canada as a part of Canadian public policy was reaffirmed at that time. The reason that they are not common in other western industrialized societies is that no other major developed country has such a high degree of foreign control of its economy—a proportion that would undoubtedly be even higher in Canada if there were no shares with multiple voting rights.

As to the specious comment that those who bought Magna A shares that have only one vote were suckers—all one can say is “some suckers.” At the end of 2005, as an easy check of the record shows, Magna had a total three-year Class A shareholder return of 16 percent and a five-year return of 17 percent. Magna’s 15-year return for shareholders is over 20 percent. And, of course, to imply because they were suckers that those who bought the shares—pension funds and so on—did not know that Stronach controlled Magna through multiple vote shares is ludicrous. They were not “suckers”—they were very smart investors.

The bottom line is that they (the author and the reviewer) don’t like Stronach. Rather than admiring him they mock him for having the courage and the commitment to run for public office to fight for what he believes. How many other chief executive officers of Canadian firms can they name who have been willing to do the same? They report he is difficult to work with. How many other senior owner-executives did they compare him with? Rather than characterize Stronach’s rise from an almost destitute immigrant to pre-eminence in one of the major industries in Canada as a great Canadian business success story, they explain it as almost a fluke based on a flaw in the Canadian financial system.

There are some who believe that Frank Stronach, with all his idiosyncrasies, is an engineering and business genius. How unfortunate that the writer and reviewer of this unauthorized biography are so warped by their prejudices and their distaste for the characteristics and success of the person they are writing about that they cannot recognize his brilliant achievements.