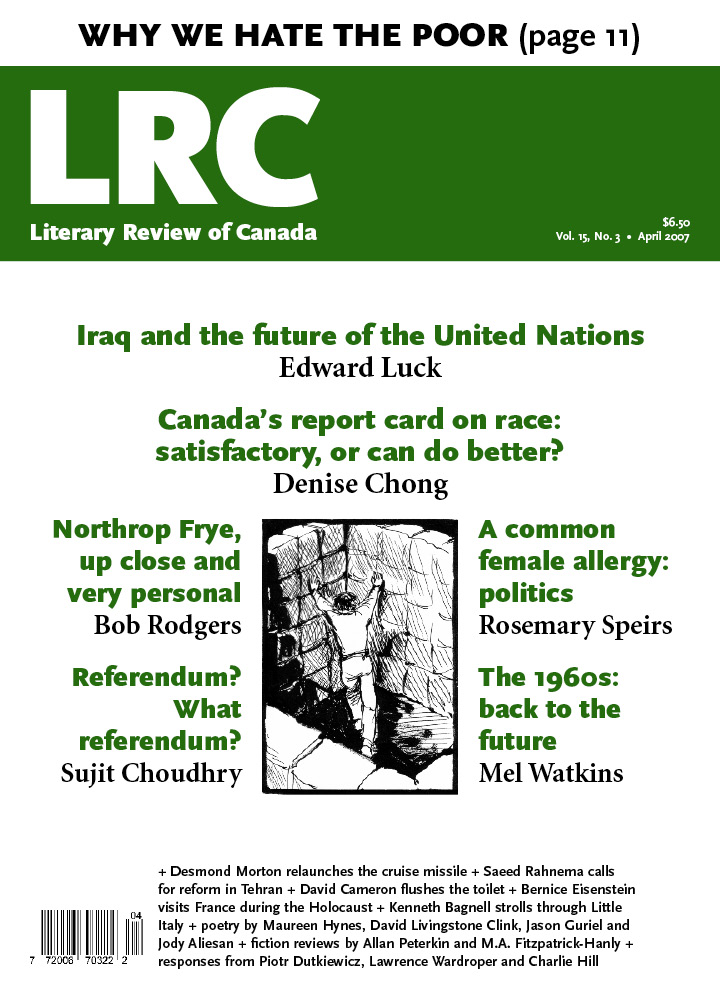 Re: “Searching for Race-Neutral Ground,” by Denise Chong

My book Race and the City: Chinese Canadian and Chinese American Political Mobilization is a story that emerges out of a framework created by history and scholarly studies and theories about racialization in Canada and the United States. The story is collective because it is born of many conversations with leading members of the Chinese American and Chinese Canadian communities who wanted to share their community and personal histories. These were not accounts of despair, but they did frequently call for a better, more equal future. Interviewees were generous in sharing with me the pride in gains and accomplishments as well as the frustration with barriers they continue to face. The goal of many of these groups was to “get into the conversation” of politics and make others aware of the common interests they have with all other groups, and perhaps this is the common ground that my reviewer refers to. The commonality of interests is something that I hope we can celebrate while still acknowledging histories and differences. I think that my book calls on all of us to be vigilant in remembering the common ground and protecting equality gains within that common ground. One way to gain understanding is to put yourself in someone else’s position. I, like Denise Chong, feel very Canadian and I feel I have roots in this country. It is this very Canadianness that makes me anxious to push my country forward to fulfil its potential for equality and truly recognize that diversity is the ultimate and most precious resource.

Denise Chong’s recent dinner conversation is reminiscent of my own recent discussion with a gentleman who asked me, “Why are people offended when I ask them where they are from?” I told him of struggles many of us had had with that question and that when we are asked that question constantly we are made to feel that we do not belong. That a Canadian could not look like us. I knew he was just a curious person who had travelled far and wide and his motivation for such a question was one of interest, but there were reasons for the frustration that he saw as a result. He seemed relieved to be given information to help him put this in context and I felt that this conversation brought what all good conversations should bring: understanding.

Re: “The Past Reframes Itself,” by Mel Watkins

How fitting it was for you to have Mel Watkins, the elder statesman of Canadian economic development policy, review two recent books on the “golden age” of Canadian economic development policy. As Watkins put it, “the history of the 1960s in Canada is a history … of hope,” and Mel himself generated a lot of it with both his economic research and his political activism. Now he looks back with the perspective of time—somewhat jaded obviously, but still hopeful—to examine what was accomplished in those years, and what was not.

The two books that Watkins surveyed—Auto Pact: Creating a Borderless North American Auto Industry, 1960–1971, by Dimitry Anastakis, and Dancing around the Elephant: Creating a Prosperous Canada in an Era of American Dominance, 1957–1973, by Bruce Muirhead—portray Canadians’ efforts to seize a bit more control over their economic destiny, in a context of U.S. geographical and economic dominance. Some of these policies (the Auto Pact chief among them) worked brilliantly, others not so well. But what was fundamental to all this proactive economic policy making was a shared conviction that the market alone could never guarantee Canadians a full, well-rounded role in the larger continental and global economies. Watkins’s intellectual mentor Harold Innis had proven long before that the market alone would relegate Canada as a supplier of resources to more advanced colonial (or quasi-colonial) masters. To counteract that powerful influence, we had to twist, curtail and prod the market, working deliberately, using both carrots and sticks, to eke out a more diversified, more stable and more prosperous economic future.

Today, of course, we’ve been living in an era of unrestrained markets, represented most powerfully (but not exclusively) by the almost two-decade reign of continental free trade. The impacts of that regime have been exactly what Watkins himself predicted: a powerful reinforcement of Canada’s role as resource supplier and the steady erosion of whatever gains in industrial development and diversification were accomplished during the 1960s and ’70s (a time when, not coincidentally, Canadian living standards and social conditions advanced much faster than in the U.S., so that we ceased being the poor continental cousins).

Moreover, the speed of this historic reversal has been accelerating. In 1999, higher-technology finished goods industries (including machinery and equipment, automotive products and other consumer goods) accounted for 56 percent of Canada’s total merchandise exports, and Canadian-made products (from cars to airplanes to personal telecommunications devices) were recognized around the world. By 2006, just 43 percent of Canadian exports consisted of finished goods—down dramatically. The clear majority of our exports (surprise, surprise) once again consists of unprocessed or partially processed resources: forestry, agriculture, minerals and energy. Especially energy.

Canada’s energy exports have tripled since 1999. Canada is by far the largest source of imported oil for the United States—supplying more than Saudi Arabia, Iraq and Kuwait put together. Canada now produces more energy for the U.S. economy than we do for ourselves. And NAFTA requires that we continue supplying most of that energy to the U.S., even in the event of a supply emergency. (This provision is so onerous even the Mexicans wouldn’t accept it; Canada is unique in the world for “sharing” our own resources so willingly, and permanently.)

We badly need another group of Canadian economists willing to push the envelope of the market in the interests of our national development—a third wave, following Innis and Watkins. Watkins’s thoughtful review reminds me how urgent that need has become.