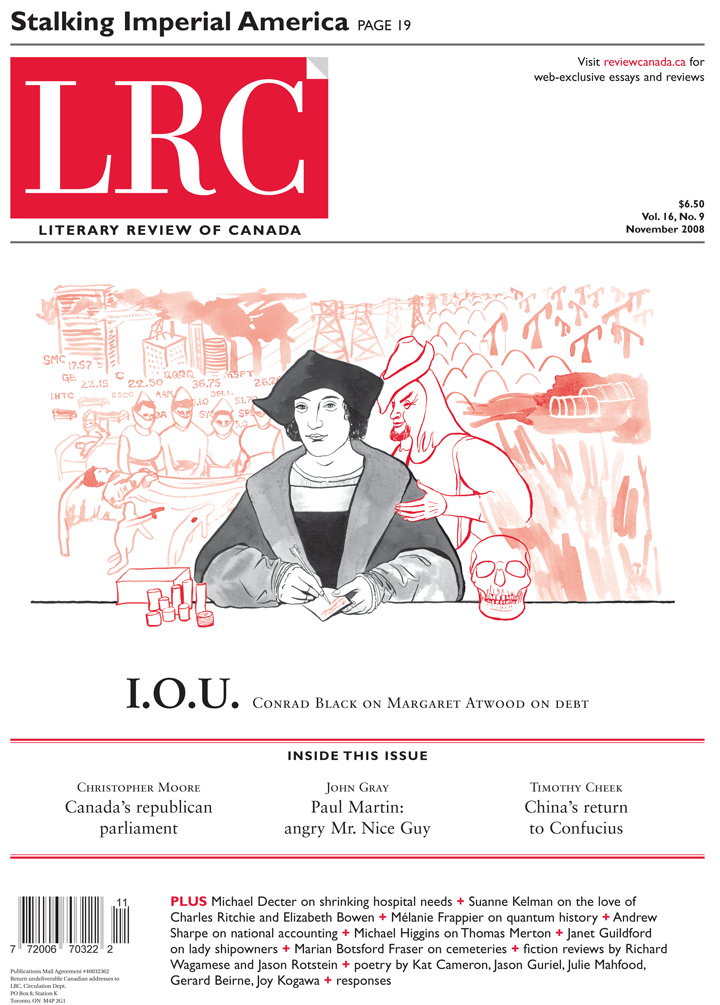 Re: “Our Canadian Republic,” by Christopher Moore

Christopher Moore’s review/essay (“Our Canadian Republic,” November 2008) echoes the lament heard a century ago: Why can’t Canada be more like Great Britain? The new world country always falls short of the old. Then, the flaw lay in its provincial culture or primitive economy; now, it is a deficient republican sensibility, measured by government tolerance for public opinion as mediated through Parliament.

Virtue lies in respect for independence, vice in enforcing party discipline. The unexamined assumption in this analysis is that Canadian voters hold the same order of values. Why then do they demand that members of Parliament who cross the floor of the House of Commons be required to seek constituency approval in a by-election?

Moore is much taken by demonstrations of MP independence at Westminster. He is less impressed by arguments I offer in The People’s House of Commons: Theories of Democracy in Contention as explanation for the phenomenon: the British chamber twice the size of the Canadian, the greater autonomy of constituencies there than here in the selection and re-selection of candidates, and the contribution these factors make in sustaining political careers for some individual MPs at Westminster. By contrast, backbench careerism in Ottawa is almost an oxymoron.

Leadership conventions are the work of the prince of darkness. Introduced as democratic mechanisms, in Moore’s view they actually weaken Cabinet and caucus control of leaders. Canada is the only Westminster parliamentary system where parties use conventions, and it is worth a moment’s reflection to consider why this innovation happened when it did, after the First World War.

Rather than pursue that thought, the Parliament of a unitary, comparatively homogeneous, island realm is offered as a democratic standard for Canada—a transcontinental country that is federal, bilingual and still sparsely populated.

It is quite right to say that republicanism is about more than abolishing the monarchy. Then too, popular sovereignty is about more than weak party discipline. Moore is unhappy with the emphasis I give to the Crown as keystone in Canada’s constitutional architecture. Still, it is not enough to say that power derives from the people. As long as the Crown’s prerogative continues to be a source of governmental authority, even when in conflict with statute law, as happened with the dissolution of the last Parliament; as long as its patronage power is exercised on advice of the first minister, with only the promise of parliamentary participation, then it is misleading to conclude that the end of the three-line whip is the Canadian equivalent of storming the Bastille.

Too much “obsession with the monarchy “ is no doubt a “depressingly thin, diluted account of what the republican alternative has to offer”—in Canada as elsewhere. Yet, as Mr. Moore also notes, “Tomkins recommends several steps to reform parliamentary democracy … One is, yes, abolition of the monarchy.”

In fact, there is some popular Canadian stir¬ring along these lines nowadays, to which our politicians ought to be paying more attention. A February 2008 Angus Reid survey, for example, suggested that 55 percent of Canadians sup¬port ending our current formal ties to the British monarchy (or, as Mr. Moore so nicely puts it, the Crown’s current status as no more than “a ritual formula devoid of significance”), while only 34 percent are opposed, and 11 percent “not sure.”

Similarly, before the Ontario courts right now is an aspiring class action urging that the pres¬ent mandatory oath of allegiance to the British monarch for new Canadian citizens violates the Canadian Charter of Rights and Freedoms. (And the noble senator and admitted monarchist Hugh Segal is apparently concerned enough to have introduced a private member’s bill in the Senate, providing that if the courts do finally smile on this argument, the present old monarchical oath of allegiance will nonetheless be retained for at least five more years, via the notwithstanding clause in the Charter of Rights.)

Finally, it is no doubt altogether correct, as the republican and democratic Mr. Moore urges in his concluding remarks, that it is the major¬ity in Parliament, and not the governor general, who decides whether any government of the day stands or falls. But a directly or indirectly elected governor general (as in the present republican parliamentary democracies of Ireland or India, for example) could make it considerably easier for the will of the majority in a minority government parliament to find its voice. And in Canada today such a reform would seem quite possible without any thorny constitutional debate, using the same model of “consultative elections” that Mr. Harper wants to put in place to help him with his Senate appointments.

If we the Canadian people, that is to say, really do want to let our members of Parliament know that we are seriously concerned about strengthening our parliamentary democracy, there are already a few potentially serviceable instruments at hand. Meanwhile, how refreshing and stimulating to hear Christopher Moore’s clear and firm Canadian republican voice in the LRC.