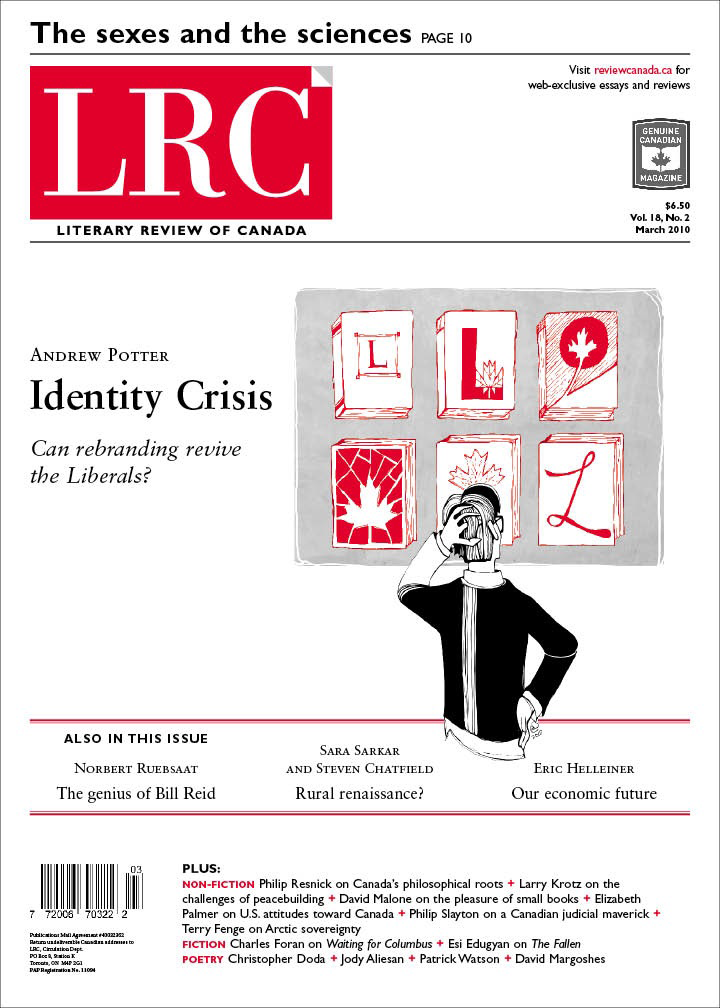 Re: “Identity Crisis,” by Andrew Potter

I am writing in response to Andrew Potter’s article about the Liberals. I found it contradictory – rebrand the Liberals but don’t do anything new – and wrongheaded. There is a desperate need for new ideas and leadership to face the challenges of the 21st century, revitalize our politics to increase voters especially among the young, but also to put our people to work.

In the past journalists clamoured for the Conservative and Reform parties to merge. Today they pan any notion of coalition. This is shortsighted; I urge the leaders of the Liberals, NDP and the Green Party to ignore them. When it became clear we were not going to have proportional representation, it seemed evident that some other way should be found to ensure that the majority views, which are not conservative, would be represented in government. As that has not happened, people are bored, as reflected in low voter turnouts. Issues that interest Canadians, such as the environment, are not acted on. Our role in the Afghanistan war was never debated. Any effective criticism of the government is shut down along with Parliament. So what to do!

At the federal level, we have had a multi-party system since 1921. We have a relatively broad spectrum of ideas represented by the numerous parties, which is healthy in a democracy. We have a long tradition of political liberalism, conservatism, and the minority strain of social democracy is also about a hundred years old. So why fight it, or urge people to vote strategically for people they don’t believe in? Instead we should let voters debate politicians during campaigns, vote for what they believe in and see what happens. It likely will result in a minority government again, which would last until a new election but I think the Liberals, NDP and Greens (if they elect anyone) should form it. On issues of diplomacy, health, education, and stimulating the economy with green industries to combat climate change, they could find plenty of room to cooperate. In Europe such governments are formed frequently as in the recent election in Germany. The nature of coalitions changes but they keep the larger parties in power while giving minority parties some input, which makes for more representative policies.

If politicians thought about the public interest, instead of their own or their parties’ interests exclusively, they might learn to cooperate constructively. In terms of personalities, there may even be a good fit. Michael Ignatieff is a bit indecisive and politically inexperienced, but he is capable intellectually of seeing the big picture and this country needs a vision for the future. Jack Layton is less inspiring when it comes to “the big picture” but he is very good on furthering specific programs as a result of his experience in Toronto politics. If someone from the Green Party is elected next time, they would bring much needed expertise on environmental issues to the table.

My eyes glaze over reading about the “same old” issues in the “same old” budgets put out by the same old overwhelmingly male, white, well-heeled politicians. I wonder what are the opposition parties waiting for? It might spark some new initiatives and we might get some candidates that reflect our population mix, including women and different ethnic and racial groups.

As the Olympics proved, huge amounts of energy and talent exist, particularly among the young. Politicians are a turn-off because they are self-interested, lack new ideas, don’t reach out to voters enough, and have their ideas packaged for the population by equally conventional, complacent journalists. That does not mean there are not new ideas, new people, and new political strategies out there to move us forward in a new global economy, and get us back to showing some progressive leadership on environmental and social issues. Let us begin.

Re: “The Sexes and the Sciences,” by Sheilla Jones

First, I wish to thank Sheilla Jones for the in-depth and insightful review of my book, The Bold and the Brave: A History of Women in Science and Engineering. The comments on the historical parts summarize well the arguments that show the cyclical nature of women’s access to education. Concerning the contemporary times, Jones mentions that “it is quite difficult to obtain up-to-date data from universities, so that much of what Frize is analyzing is already out of date.” Jones says this makes it difficult to arrive at a definitive conclusion on why women’s enrolment is declining in science and engineering. However, the statistics are also part of the history and show trends that will be important to look at decades from now. Most of the tables have been placed in appendices not to distract too much from the discourse.

Through her personal experience, Jones reveals a major problem that young women face when choosing a scientific career. She notes: “I did not have a single woman professor, lecturer or lab instructor from the time I started physics until I graduated with a master’s degree.” In the book, I relate my own personal story of being a lone female in a world of men, where I felt isolated, different and sometimes out of place. There are two chapters on solutions to this problem: how to get more female role models in the classrooms and how to get more in these careers.

It is interesting that several of the comments made by a well-known activist for women in science and engineering, Dr. Margaret-Ann Armour, are clearly stated in the book, which reinforces their pertinence for an audience interested in this topic. It is also interesting that both Armour and I blame the culture in science and engineering as a critical factor that deters women from enrolling in these programs. Not to be overlooked is Armour’s statement that “masculine characteristics are valued more highly than feminine ones.” This is the crux of the matter and stressed throughout the book; the value of women’s work will become a reality when scientists and engineers respect the difference that women may bring to this ­enterprise.

Re: “Down on the Farm,” by Sara F. Sarkar and Steven P. Chatfield

As a libertarian, I have nothing against people enjoying the rural lifestyle, seeking self-satisfaction above profits and promoting what they enjoy and believe to be true—as long as they don’t impose their values and beliefs upon others through coercion (taxation, regulation, mandatory “buy local” policies, etc.). Personally, I couldn’t wait to get out of this lifestyle (my parents produced maple syrup and apples as sideline activities and I had chopped more wood by the time I was twelve than most people will in a lifetime). Some of us, and I suspect most human beings if you look at rural exodus historically, just feel more at home in cities and would rather enjoy the best the world has to offer, especially if this is better for both the economy and the environment as I believe to be the case.

Reviewers Sarkar and Chatfield are right to award Thomas F. Pawlick’s The War in the Country: How the Fight to Save Rural Life Will Shape Our Future and Brian Brett’s Trauma Farm: A Rebel History of Rural Life high marks for giving us compelling stories about farming and rural life. These stories are keepers and reminders of the countryside that was at the turn of the 21st ­century.

However, Pawlick’s attempt fails to turn his collection of stories from his own rural community into a call to action and a guide to save this rural way of life. His analysis of the causes that underlie his war is too shallow. I misunderstood these diverse clashes in the countryside until I read Jane Jacobs’s Cities and the Wealth of Nations years ago, particularly her musings about the countryside and its relationship to cities. She did not refer to the wide-open spaces beyond our city limits as countryside, rural, exurban or even country. Her term was “hinterland.” I reread that part of her book many times—eventually accepting her reasoning.

Both Brett and Pawlick hold out a false hope if they urge countryside folk to expend their resources on an independent rural future. There is room for some managing of the all-pervasive urban economic and cultural juggernaut. Broadly based alliances of rural interests are the best hope but even these are likely to be dependent on their connections to cities to be successful.