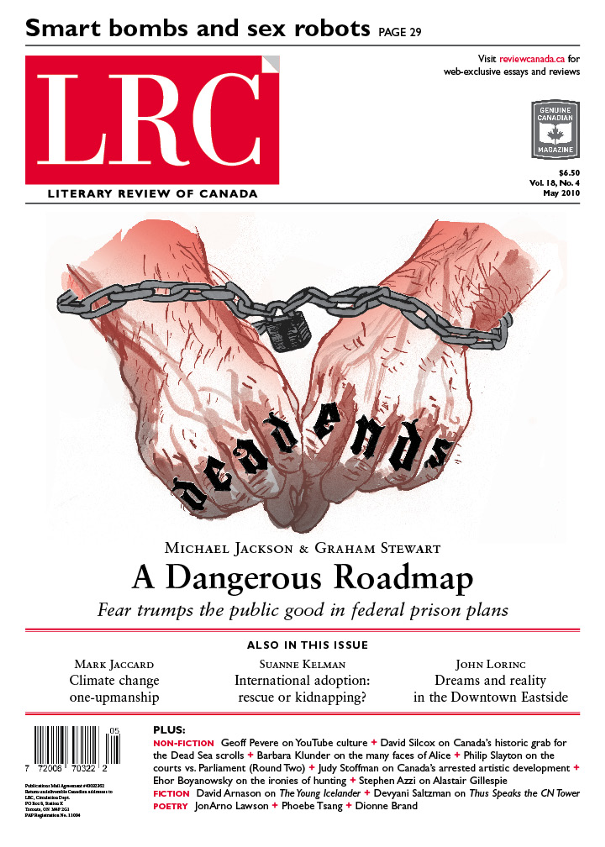 Re: “Fear-Driven Policy,” by Michael Jackson and Graham Stewart

One cannot help but note the irony that in the history of Canadian correctional services, it has been Conservative governments that have introduced both the most progressive and the most draconian legislation. The Mulroney days of compassionate “progressive” Conservatives gave us the lauded Correctional and Conditional Release Act in 1992. Less than two decades later, they have been replaced by the Harper Reformers who have given us A Roadmap to Strengthening Public Safety, which all evidence reveals is anything but.

The Harper government’s “lock ’em up and throw away the key” approach to crime and corrections looks south of the border 25 years ago for policy inspiration. What they fail to consider is that today, these policies, discredited after decades of disappointment, are being abandoned in the United States, having created more dangerous criminals and bankrupted state coffers. Jackson and Stewart note that “throughout the history of incarceration, it has been the pervasive tendency of prisons to make prisoners more dangerous and more antisocial.” History has demonstrated that the Roadmap’s policies will do just that. Canadians must ask themselves, do we want a prison system like California’s, where the recidivism rate is 70 percent, prisons are so overpopulated that the courts have had to order the release of tens of thousands of inmates and government is drowning under the weight? It is hard to believe that we do.

Moreover, the Roadmap authors made no attempt to attach a dollar value to their plan. American cases and a few independent studies that have attempted to put a price tag on these Harper government policies lead us to believe that the cost will be gargantuan—in the tens of billions of dollars and climbing. This is further confirmed by the fact that the Harper government has gone out of its way to subvert every effort by Parliament, academia or media to see costing figures, hiding behind the impenetrable shield of “Cabinet confidence.” Even the parliamentary budget officer has been stonewalled by the government and has had to cobble together pieces of data from many jurisdictions to be able to provide a comprehensive analysis.

Canadians want safe communities and they know that their political leaders cannot achieve this is if they operate in a vacuum of evidence and facts. It is their money we are spending after all, and their children, and grandchildren and great grandchildren, who will pay for the uninformed and unenlightened decisions we make today. The Mulroney government recognized this. Why, nearly two decades later, doesn’t the Harper ­government?

Re: “The Climate Change Olympics,” by Mark Jaccard

The Olympic spirit of competition applied to climate politics had also led me to start daydreaming of an “Own the Podium” equivalent. Prior to reading this essay, I had been imagining “Own the Protocol.” Far from owning the protocol, Canada has become a pariah in international negotiations. Among those 180 plus countries to sign and ratify Kyoto, we alone have, by deliberate government policy, chosen to repudiate our legally binding targets.

Mark Jaccard is quite right that the Liberals also failed on this legal treaty, but his essay omits the fact that, in April 2005, the minority Liberal government of Paul Martin brought forward a barely viable plan to reach Kyoto. With the election of Stephen Harper nine months later, the plan and all its elements were cancelled. So too was Canada’s commitment.

The spirit of competition for climate action exists at the sub-national level. Jaccard quite rightly made the parallels to what happened in the United States under the Bush regime. In Canada, we have British Columbia competing with both Ontario and Quebec for bragging rights for climate action. British Columbia’s carbon tax was brave indeed. Perhaps more significant in real greenhouse gas reductions is Ontario’s plan to shut down its coal-fired power plants. Meanwhile, it is municipal governments with aggressive climate action plans that actually have taken the lead.

We have lost opportunity after opportunity for the economic benefits of getting this right. We have squandered the post-Kyoto opportunity to replicate within one country (with ten provinces and three territories) what the European Union, with 20-odd sovereign nations, did post-Kyoto. We did not divvy up the burden and move forward. We allowed a dysfunctional federal-provincial-territorial process to give Alberta a veto. We squandered the economic stimulus opportunity, investing in highways, while designing an infrastructure fund that made funding mass transit all but impossible. And internationally, the Harper approach of sabotage, while unheralded by domestic media, has played a not insignificant role in scotching international progress.

So where from here? We clearly need a national carbon tax, applied in revenue neutral fashion, cutting taxes throughout the fiscal system. We need an incentive plan to shift to a low-carbon economy, with cutting–edge new technologies that take us beyond fossils as the driver of our economy.

And we need to approach Cancun and the next round of climate negotiations, coming this December in Mexico, with the same zeal we brought to the Olympics. Ragging the puck would be an improvement. Right now, Team Canada is shooting at the wrong goal.

I take exception to some of Ehor Boyanowsky’s remarks about hunters and non-hunters. He states at one point that “hikers and wildlife watchers … have little knowledge or information regarding the symbiosis among water, weeds, insects and fish or field and fauna. Only the predator … the angler … the hunter … takes the trouble to notice whether [conditions] are sustaining the species upon which he or, less often, she depends for sport or even survival.” I was dismayed by how readily he could make such a sweeping generalization, backed up by absolutely no evidence whatsoever. There are, of course, those sentimental folks who wax lyrical about the beauty of a flower without having the faintest idea of its biology or eco-niche. But there are also hunters who use their time in the bush to drink beer, tear up the landscape with ATVs and fire guns at anything that moves, often to the detriment of their fellow hunters, other animals or innocent passing motorists. To characterize all those who hike and watch wildlife as witless dilettantes is outrageously unjust to the countless dedicated professionals, non-specialists and volunteers who act as stewards for and analysts of their particular little patches of earth.

As well, his remark that “the environmentalist sounds the alarm too late, when only a few creatures survive,” is equally mystifying. I can surmise only three explanations for his remark: 1) environmentalists have a long history of talking and pleading and lobbying, which is largely ignored until the situation has grown to calamity levels; 2) humans respond much more viscerally to the prospect of an imminent or occurring crisis than to long-term degradation of conditions; and 3) mainstream, commercial media is much more interested in and prepared to air punchy sound bites rather than lengthy, in-depth analyses of environmental concerns. I believe that Boyanowsky’s review, though on the whole interesting, could have been that much more valid if he had avoided groundless simplifications and instead stressed that all of us who visit, make use of, live in or pass through the wild should be mindful of our place within its intricate interconnectedness and complexity, and conduct ourselves accordingly.

Re: “Rescue or Kidnapping?,” by Suanne Kelman

I’m pleased that the LRC is helping to further the debate about the politics of adoption. My book is my response to simplistic public conversation, which casts adoptive parents as either humanitarian heroes or colonizing baby-snatchers, ignores birth parents and elevates children as little more than posters for western goodness: cute and mute. We are currently steeped in either feel-good stories of rescue or horrific tales of kidnap, which flatten the disparate and contradictory stories of real life. I also want to draw attention to how adoption can deflect attention from the sordid mess that is global political economy, and how the inequalities that result in the creation of modern adoption systems are created.

So I’m happy to see that Suanne Kelman appreciates that my goal was to challenge the fantasy of the global cabbage patch. Despite the pictures we see on the news or in adoption agency advertising, babies do not sit alone, removed from parents, neighbours, communities, waiting for westerners to rescue them. The adoption system we’ve inherited over the past century (domestic and international) is practised as a zero-sum game: I win, you lose. Loss is always part of the story, not just in the case of scandalous, illegal, baby-snatching adoption.

I’m puzzled, then, that Kelman often invokes the trope—whoops, sorry, cliché—of the needy Third World child who is better off in Canada (including my own). The adopted Asian girl she sees on the subway, Mia Farrow’s children, the untold numbers of children growing up in far-off orphanages, all of these are examples, to Kelman, of children with a “better shot at a good life” in Canada than they would have had otherwise. Maybe so. My point, though, is that the dazzling pleasures of children can be blinding; we ought to keep both the individual and the political context in view. As long as “rescue” frames our understanding of adoption, or the needs of poor children, we’ll never see the big picture. I think we can do better than make sure adoption is practised ethically and legally, as Kelman recommends. I agree, of course. But we can also take all that warmth, support and compassion we seem to want to bestow on poor children and figure out how to spread it around a little more evenly.

Re: “The Elected and the Appointed: Round Two,” by Philip Slayton

It is a testament to Philip Slayton’s acerbic style that his review of my book, Not Quite Supreme: The Courts and Coordinate Constitutional Interpretation, made me smile even when it stung. Given that I do indeed “revel” in being a “cantankerous outsider,” it should comes as no surprise that I have a few quibbles with his review.

Slayton suggests that “coordinate constitutional interpretation” is “born on the right wing,” is overly normative and “does not seem to explain … the world as we know it.” As I detail in Not Quite Supreme, the coordinate theory has long roots in Anglo-American jurisprudence and its proponents have come from both the left and the right. Indeed, the theory’s recent resurgence in the United States has come from American legal scholars dissatisfied with decisions of the Rehnquist and Roberts courts.

In Canada, as Slayton notes, “everyone behaves as if the Supreme Court does have the last constitutional word.” On that point, I am in full agreement. It is such an orthodox view that when the Supreme Court of Canada merely flirted with coordinate interpretation in two notable Charter criminal rights decisions, the negative reaction was such that the court retreated back to its more comfortable position of judicial supremacy. If nothing else, my book is intended to address this failure of popular constitutional imagination and to suggest a conception of our constitution that is something more than what the Court says it is. This is obviously a normative argument, but one that must be made before we can expect political actors other than judges to behave as if they too have a role in determining what the constitution means.

Finally, on the issue of the appropriate audience for the book, I concede that Not Quite Supreme is not quite as accessible as Slayton’s wonderfully lurid Lawyers Gone Bad: Money, Sex and Madness in Canada’s Legal Profession, but I expect that readers of the LRC who are interested in legal issues will find it quite manageable and—I dare say—enjoyable.