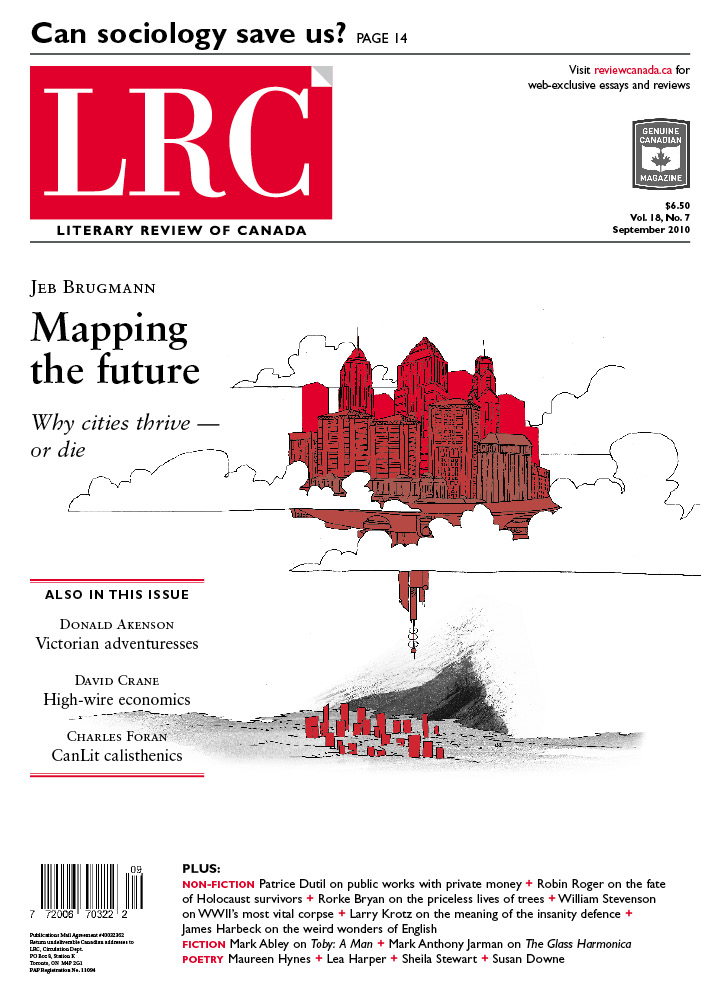 Re: “Miscellany with a Mission,” by Charles Foran

Charles Foran concludes his otherwise informative and entertaining review with an unnecessary swipe at literary academics. In a nostalgic vein, Foran laments writers “of the ‘ism’ variety” and worries about Canadian universities “where undergraduates may now take courses that, in lieu of foundational figures like Mordechai Richler and Robertson Davies, teach instead about ‘otherness’ and the ‘post-colonial gaze.’” “Such is our age,” he observes ironically, “increasingly diffuse and specialized, and now a full generation beyond the assault and destruction of The Curriculum, that hegemonic, Eurocentric, male-dominated fortress, already a moss-covered ruin.”

When criticized by radio commentators who disdain all scholarship, I sometimes feel validated, but when as perceptive a reader as Foran fails to appreciate our work I realize that we have not done a good job of explaining our methods and purposes. University literature classes, after all, should and do differ from community book clubs or journals that publish literary reviews for a wider audience. All have their place. Even so, specialization has become an easy target in all fields of human endeavour. In a world where politicians habitually dismiss opposing arguments as overly-complex nonsense, people tend to demand simple answers. Indeed, it would be great to have every literary scholar read The Canon before moving on to the “thousand smaller curricula” Foran laments, but few humans will live long enough to study every book that has been declared a masterpiece. That is why all disciplines teach students to specialize as they endeavour a mixture of breadth and focus. And these smaller curricula have, in fact, produced some marvellous results as they bring attention to important works that do not fit easily into larger curricula or cannot be readily comprehended by vast audiences.

Rigelhof’s book itself provides a striking example of the need for thinking about precisely such issues as otherness and post-colonialism. He cheerfully celebrates his version of a canon while slighting authors some of us consider worthy of greatly expanded discussion. Tomson Highway, for example, has one and a half pages about his work but no other mention of how Kiss of the Fur Queen might have influenced other Canadian authors. George Elliott Clarke appears in similar isolation. Joy Kogawa’s Obasan, a political event as well as a worthwhile novel, appears nowhere in Rigelhof’s volume. Kogawa herself has only one brief mention, which puts her ahead of Afua Cooper whose name never shows up at all. Overall, male authors (60) appear about twice as often as female authors (36), a surprising statistic since women have figured prominently in the production of novels for well over three centuries.

All of the writers I mention here fit the guidelines Rigelhof set for his study. Their slight mention or absence does not testify to any malicious design behind the creation of Hooked on Canadian Books; obviously, Rigelhof has not only the right but even an obligation to tell it as he sees it. At the same time, his idiosyncratic take demonstrates the need for other views. When critics complain of “isms,” I often wonder how they fail to perceive Protestantism, whiteism, or maleism as restrictive areas of investigation: taken as normal, they somehow fly under the radar.

Writing in a manner appropriate for a literary review journal, Foran provides a good example of an alternative with a review that highlights the strengths and weaknesses he sees in Rigelhof’s text: I enjoyed Foran’s take and learned from it as well. I only hope he stops to consider the benefits provided by other types of forums in which scholars undertake other types of literary studies. Foran notes the students who “emerge from these experiences more sensitive and progressive, but depressingly unread, and often with gaping holes in their own literacy.” Without a doubt, some instructors and students take advantage of new methodologies to avoid work; slackers have always plagued all areas of endeavour. But this stereotypical view of scholarship fails to acknowledge many academics who work harder than ever to comprehend an ever-increasing body of literature that leaves us all with ever-lengthening lists of projected readings to fill in the inevitable gaps. For some, the gaps will be filled in ways that may not always conform to traditional expectations. As individuals focus on particular areas of research, their work as a whole contributes to continuing literary scholarship that develops ever-changing canons and ever more fascinating methods of reading them.

Re: “The Private Option,” by Patrice Dutil

In his review of Public Service, Private Profits: The Political Economy of Public-Private Partnerships in Canada, Patrice Dutil’s main point is that our case studies are outdated, suggesting that approaches to P3s are now more responsible than they once were. The case studies span the years 1991 to 2007, and they do point out where past weaknesses have been improved upon. Moreover, they provide an essential backdrop to chapters that detail the development of public policy, the economics and finance of P3s and the evolution of techniques of evaluating P3s proposals. These chapters show how thinking toward P3s has evolved over time, and in them there is, indeed, commentary on more recent P3s and their weaknesses, supporting the general skeptical tenor of the book. In recent projects, risk transfer remains contested, interest rate assumptions are still controversial and, in the Lansdowne Park P3 stadium proposal, competitive bidding and value for money processes do not appear to have been followed.

To my knowledge, no trade union, including the Canadian Union of Public Employees, has yet endorsed the book or its approach and the book does, indeed, stress that the union movement is not unanimous in its views on P3s, and even quotes a letter from the Laborers’ International Union of North America condemning CUPE’s stance on P3s. It also deals explicitly with investment in P3s by union pension funds such as those of the Ontario Municipal Employees Retirement System (OMERS) and the Ontario Teachers’ Pension Plan. It is not correct to suggest that the Steelworkers would support P3s because they frequently benefit from them. The Steelworkers’ website makes it abundantly clear that they do not.

Neither is private business uniformly in favour of P3s. Recently, Bombardier reacted negatively to a proposal for P3 light rail in Winnipeg, even though it would be the clear favourite to deliver the streetcars, stating that “public private partnerships are not the best way to finance public transit.” The book also details opposition and cautions from auditors, accountants, architects, engineers and small construction companies.

Dutil’s points on Highway 407 are, in fact, mentioned on page 146 and impacts on labour are dealt with in each case study as they vary from one to the other.

Finally, the book does draw on the works of those supporting P3s, but it aims to raise questions about the wisdom and basis of that often uncritical support.

Re: “Can Sociology Save Us?,” by Ana Siljak

First an admission: I loved Ana Siljak’s Angel of Vengeance so much I gave it to my sons as Hanukkah gifts last year, possibly making me Canada’s single biggest fan (and buyer) of the book. That said, sociology is different: not literature, literary criticism, cultural studies or popular history but a systematic, empirical attempt to understand the social world. From this perspective, sociology no more needs quotations from Nietzsche and Dostoevsky (or John the Baptist, come to that) than does nuclear physics, genetics or molecular biology, let alone carpentry, metalworking and the other skilled trades. We have had that particular discussion: it was called the Enlightenment. And there are two cultures, as C.P. Snow said: science and non-science (whether that non-science is a humanities discipline, a religion, a superstition or something else).

Epistemologically, I consider postmodernism a kind of hocus-pocus, a shell game, not a serious approach to the real world. Ancient Greeks dealt with the postmodernist premise millennia ago when they noted that you can’t trust a Cretan who says all Cretans lie. True, the world is littered with uncertainties and untruths, and people generally hold different perceptions of reality—that’s a fact. However, that fact does not privilege the varied views to equal status in science, or in sociology. Sociologists struggle against this confusion, this noise, to find repetition and patterning in the fog of data.

Siljak’s review makes two substantive points I must address in the little space available. First, she suggests that religious values undergird all our perceptions and judgements, so it is impossible to have a value-free—much less, non-­religious—understanding of the world. Second, she paints me as eager to dismantle government and have The People run about free, possibly naked, making messes as they go. This is a misreading of my text and, especially, a failure to understand the relationship between my book’s penultimate and final chapters (on politics and social movements, respectively).

On the first point, note simply that religious doctrines vary widely while core human values (health, safety, fair treatment and social inclusion, among others) are seemingly universal and invariant; so I don’t see how religion can claim credit here. On the second point, I fully recognize the need for government in a modern society. However, I reject the media-fed tendency to idolize self-styled titans, corporate kleptocrats and suits that masquerade as elected officials. I claim that ordinary people make history; all the rest are an often-costly obstruction. My argument is that ordinary people need to claim their power.

It is not sociology’s job to save us. We humans will have to save ourselves, with occasional help from sociology. Perhaps humanity may not get along as well as I expect, based on sociological evidence. But to doubt the importance of the task is to live in the dark. To imagine priests, Great Men or postmodern savants will solve the problem for us is to ignore history.