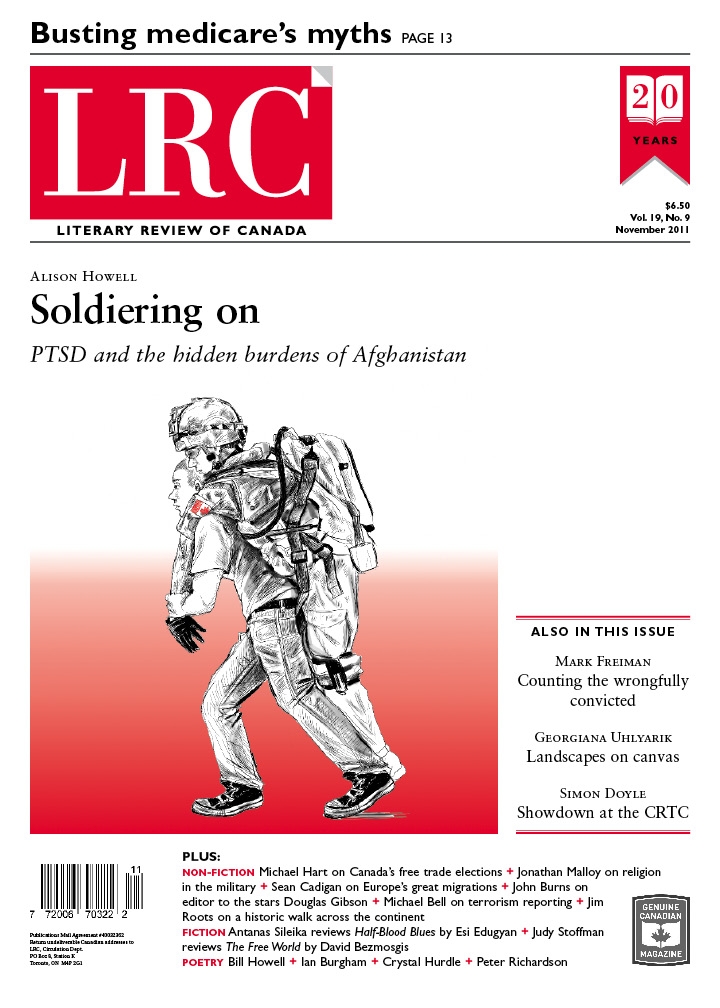 Re: “Afghanistan’s Price,” by Alison Howell

Alison Howell’s eloquent plea for a “demobilization” of Canadian society makes a series of crucial connections between warfare and welfare that are definitive in an era of global intimate violence. Refusing the separation between homefront and battlefield that defines so much thinking about war, Howell asks us to think across the care of soldiers and civilians. Perhaps the most compelling thread of her powerful intervention addresses the entanglement of military and civilian social provision, highlighted in her essay’s title. Howell tells us that soldiers’ entitlements have repeatedly served as a prototype for civilian forms. Indeed, when we look at the genesis of various forms of welfare and insurance, warfare is always in the wings. Soldiers were the first to receive a range of benefits that were later extended to civilians in the area of pensions, health care and education. We can look to Bismarck’s experiments with social insurance for soldiers as a means of rendering the force of the nation-state, or the suggestive language of “post-war welfare” that emerged in the wake of mass war, when all citizens became “employees of the nation,” as Nikolas Rose argues, and the line between military and civilian blurred.

While Howell rightly draws links between civilian and military provision, she also bemoans the instrumental nature of military policies, almost suggesting that this is a recent turn. Yet if there is one lesson to be gleaned from military welfare it is precisely its instrumental nature. When recruiters describe their work as trawling for fish or picking the lowest hanging fruit, we should listen. When they complain in the 1960s that the rise of a civilian welfare state eroded their key bargaining chip, they mark something meaningful. Richard Titmuss once argued that early welfare policies were designed to govern the quality and quantity of the population for warfighting. In other words, states worked to align the trajectory of individual bodies with the body politic in the interest of fighting national and colonial wars. Howell makes a case for a more humane and less militarized military, yet this longstanding welfare-warfare tango indicts not only the violence done by warring nation-states but also the violence of the very creation of national state and citizenship forms. Howell’s claim to redirect funds from fighter jets to veterans’ care is vital, yet these pressing practical matters also need to be enveloped by a deeper probing of the persistent violence at the heart of the national politics of life and death.

Re: “High Noon at the CRTC,” by Simon Doyle

I thought Simon Doyle’s article on Netflix and over-the-top services was one of the most informative and comprehensive articles on the subject that I have read.

I believe that draconian legalization, if passed, to control and regulate foreign over-the-top broadcasters is doomed to fail. This will be the end of the CRTC as we know it.

Whether the CRTC has the power to regulate the internet and new media is not the point. Doyle talks only about broadcasters and not about average people, who are not in the broadcast industry but who use the internet daily for their livelihood. An onerous regulatory decision would restrict Canadian citizens from accessing certain websites; it would be a huge inconvenience. The CRTC has basically made it clear through its words and actions that the regulator cares to disregard what the public thinks about this issue, which is a very big mistake. Non-industry types—consumers—should get an equal chance to voice their opinion on this issue. As it stands, the impression is that the CRTC has taken sides with broadcasters. Konrad von Finkenstein, as Doyle states, made this clear when he told acting unions and broadcasters to lobby the government to be heard.

It very hard to anticipate what the internet will be like and how it will affect us in the years to come. However, we do know that it has become an essential tool in our lives that is used by us for everything from banking to online shopping, communicating with family, for education, jobs and an endless amount of other uses. The CRTC commissioners should realize what they are getting themselves into by regulating the internet and what impact it will have on average people—consumers who purchase products and not only the broadcasters and entertainment industry that sell them. Reactions of consumers should be taken into consideration before the CRTC makes a harsh decision that could fundamentally change the internet in Canada.

Re: “An Editor’s Delicate Art,” by John Burns

My book, Stories About Storytellers: Publishing Alice Munro, Robertson Davies, Alistair MacLeod, Pierre Trudeau and Others was so thoughtfully reviewed by John Burns that only a graceless ingrate could find any grounds for complaint. I am the man for the job.

The accompanying illustration shows a bearded man sitting at a desk with portraits of authors who seem to be Alice Munro, Robertson Davies and others floating in the air around him. By the context it seems clear that the bearded man is me.

Yet he is wearing a bow tie.

I am not now, and never have been, a bow-tie wearing person, outside formal evening occasions. Some of my best friends wear bow ties, in public, but it has always seemed to me to demonstrate a regrettable character flaw. I hope that they will continue to resist the lure of tattoo parlours.

To confirm my position on this important matter, I have taken care never to learn how to tie a bow tie, as my wife will attest. So please, no more libellous illustrations.

Re: “The Real Dope,” by Gregory P. Marchildon

I am generally in agreement with Gregory Marchildon’s views as expressed in his review of Health Care in Canada: A Citizen’s Guide to Policy and Politics, by Katherine Fierlbeck. I would gently make three points.

First, it is not just those opposed to publicly financed medicare who reject evidence; some of the defenders of medicare also tend toward a defence of principle rather than one of evidence. I would not include Marchildon in that group. For example, advocacy for the use of internal markets offends some medicare defenders, perhaps because the very word “markets” linked to health care offends them. However, the evidence of improved quality, lower cost and shorter wait times in cataract surgery in Ontario suggests that the public dollar can be stretched further with a tendering approach that is at the heart of internal markets innovation. This is independent of whether any for-profit participants are allowed, and fully within the principles of the Canada Health Act. We should all be careful not to throw the innovation baby out with the anti-public-medicare bathwater.

Second, the Supreme Court in Chaoulli v. Quebec (2005) was right in asserting that governments cannot grant themselves a monopoly in health insurance and then fail to perform if that failure violates a citizen’s right to security of the person. The remedy of private insurance can be seen as misguided and counter the evidence without the fundamental premise of that decision being flawed. First ministers had already earmarked money in their 2004 accord for wait-time reduction. This earmarking, so long opposed by provincial governments, achieved one of the only measurable positive outcomes from the accord—reduced wait times. The implementation of wait-time reductions was prodded by the Supreme Court decision.

Third, Marchildon’s point about self-interest applies equally to the provider community that champions increased funding for health care in Canada and benefits from the vast majority of that funding that flows through into fees and wages. The contest over the superior good is waged not only between the rich and the poor but also between the taxpayer and the healthcare provider. And that is what makes the politics of health care so emotional, so compelling and so intractable.

Evidence, at a minimum, raises the quality of the debate and should be valued for that alone. Values and beliefs will continue to play an important role in the ongoing construction and reformation of what we call medicare. It would be a much duller place without that clash. We would be reduced to the weather and hockey as major points of debate.

Re: “Canada on Canvas,” by Georgiana Uhlyarik

My book, Picturing the Land: Narrating Territories in Canadian Landscape Art, 1500–1950, focuses on five concepts of territory that informed the production of Canadian landscape art over 450 years: nomadic, Arcadian, Edenic, sedentary and universal. Georgiana Uhlyarik suggests that I devised these concepts; she appears unfamiliar with the important position they occupy within Canadian art history today.

Uhlyarik notes that my book claims that Canadian landscape art was largely informed by European conventions. Unfortunately then, the book does not recognize the nationalistic nature of Canadian landscape art. A more accurate description of the book’s position would state that, while Picturing the Land highlights important differences in the Canadian work, it demonstrates that most Canadian artists upheld the superiority of European and American art schools, publications, museum collections, styles and even subject matter.

Uhlyarik regrets that Picturing the Land removes “itself from aesthetic deliberations” and “a profound respect” for the artist by not using works of art that could form “a compendium of excellence.” Thus, and remarkably, she rejects art historical scholarship of the last 30 years. Uhlyarik supports her position by stating that, if the book’s illustrations formed an exhibition at the Art Gallery of Ontario, where she is a curator, visitors would be aghast at the lack of “excellence.” Understandably, curators must mount exhibitions for “customers” who want to look at art that has long been established as the most “beautiful” or the most valuable. But Picturing the Land has no such goal. It answers questions raised by dominant types of landscape art. For example, why did the French and the English use the same European landscape conventions up to 1760? To respond, it is important to use some of Uhlyarik’s “excellent” art, as I do, and some “less excellent” examples, so that the history of Canadian landscape art becomes a discussion of art informed by particular social, economic and political conditions rather than a matter of star figures followed by groupies.

Finally, I do not believe I should have used Terry Smith’s Australian Art or Simon Schama’s Landscape and Memory as a model, rather than the five concepts of territory, as Uhlyarik proposes. Canada’s bifurcated settler culture is quite unlike Australia’s monolithic one, while Schama’s work is, as your reviewer says herself, a “rhapsody.” Art historians rejected the production of rhapsodies a long time ago.

Re: “A Large But Poor Economy,” by Michael Hart

In his review of Canada 1911: The Decisive Election that Shaped the Country, Michael Hart errs in noting that Wilfrid Laurier was personally defeated in the election. In fact, he was elected, twice. He won the riding he had represented for decades, Québec-Est, by acclamation. Notwithstanding that predictable victory, we point out in the book that he also ran in Soulanges. The voters in that riding could not resist being represented by Sir Wilfrid and booted out the Conservative incumbent, Joseph-Arthur Lortie. As Hart points out, this was a dirty election. But it was dirty all around. Rodolphe Forget, the rich Montreal businessman, also ran and won two ridings for the Borden Conservatives. He retained Charlevoix easily, but also went after the small riding of Montmorency and sprinkled enough charm and money to defeat the Liberal incumbent by a narrow margin. Both men represented two ridings in the twelfth parliament. They died within two days of each other, in February 1919.