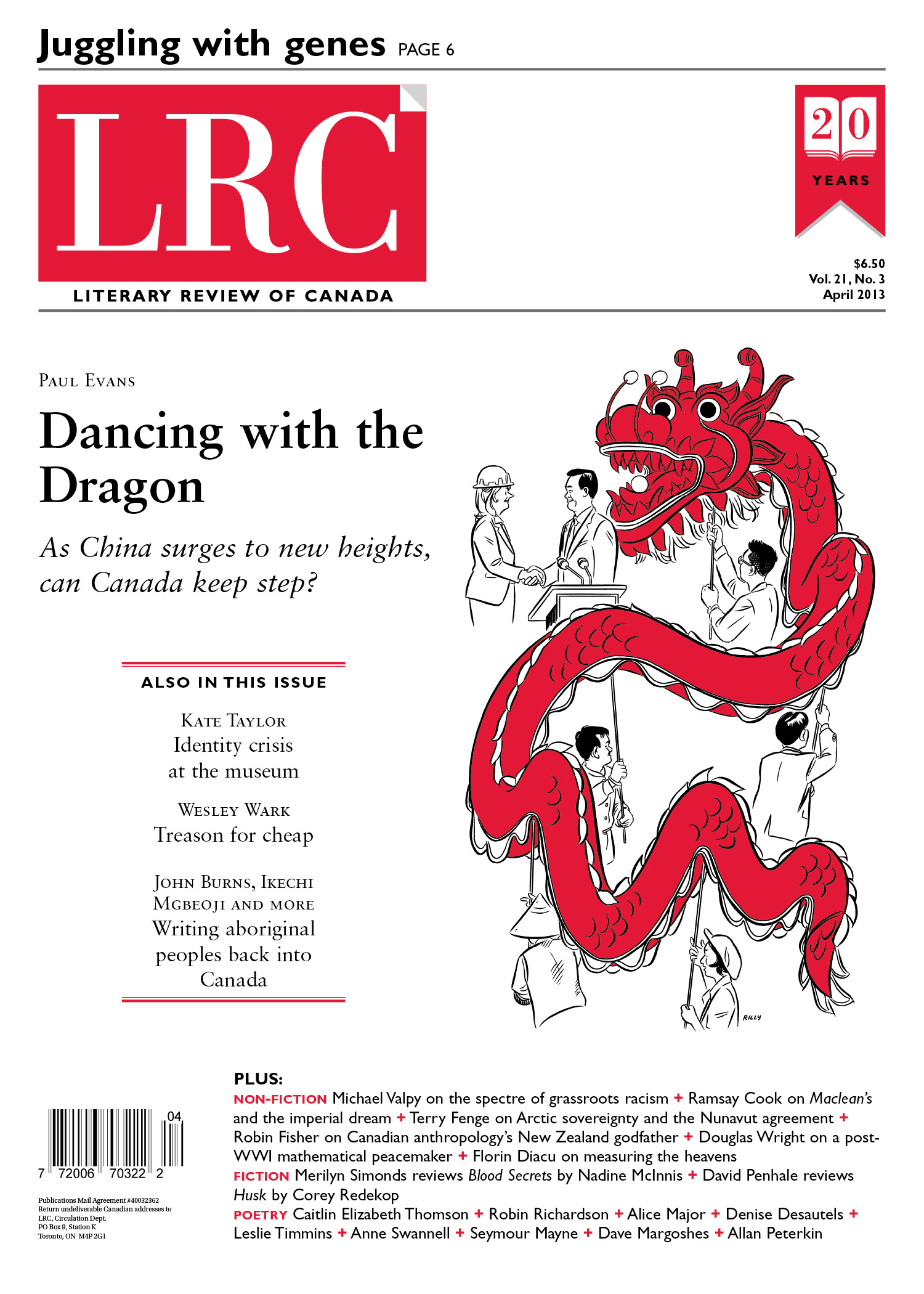 Re: “Dancing with the Dragon,” by Paul Evans

Paul Evans suggests that in Canada “debate has been obsessed with a distinction between pursuing commercial and diplomatic opportunities with China versus promoting human rights … our domestic debate still rotates around whether we should be having economic relations with a country run by a communist party.” He further hypothesizes that Canada has adopted a policy stance of “cool politics, warm economics” toward the People’s Republic of China.

But his assertions do not stand up to scrutiny. Over the years Canada has adopted a highly consistent approach to relations with China. It is the same one articulated by our 1995 foreign policy statement, “Canada and the World,” based on “three pillars of diplomacy”: the promotion of prosperity and employment; the protection of our security, within a stable global framework; and the projection of Canadian values and culture.

As to the first pillar, Canada wants fair and reciprocal trading agreements with China. We welcome Chinese investment, but as Prime Minister Stephen Harper made clear in his 2012 press conference announcing government approval of CNOOC’s acquisition of Nexen, Canada will not allow the Chinese state to gain control of Canadian economic resources through full acquisition of Canadian resource companies by Chinese state firms. But we do welcome Chinese state firms to invest in them as minority shareholders.

As to the security aspect, Canada will continue to investigate Chinese state espionage in its economic, political and military aspects including cyber-espionage in Canada and to work in multilateral forums to encourage the Chinese regime to follow the norms of responsible global citizenship.

Finally, with regard to the third pillar as the 1995 statement puts it: “Canada is not an island: if the rights of people abroad are not protected, Canadians will ultimately feel the effects at home. They understand that our economic and security interests are served by the widest possible respect for the environment, human rights, participatory government, free markets and the rule of law. Where these are observed, there is a greater prospect of stability and prosperity … Their observance, therefore, is both an end in itself and a means to achieving other priority objectives.”

There is a strong cross-partisan consensus on how Canada should manage relations with the PRC. After all, even the Dalai Lama’s honorary Canadian citizenship was achieved through a unanimous resolution of Parliament.

Paul Evans raises some interesting points about dealing with countries that are very different from our own, especially when it comes to human rights.

As a philosopher who approaches ethical issues from a cultural perspective, I have thought long and hard on these issues. If a culture is homogenous and lives in isolation from the rest of the world, it probably does not matter to anyone outside that culture what the practices are. But when a culture enters the world community, the world community can expect that new player to, at least to some extent, play by the international rules.

The other side of this issue is that the West wants to deal with various countries, China being just one, because these countries have things we want. And because of that we let them break our rules.

Terry Fenge argues that a full and proper implementation of the 1993 Nunavut Land Claims Agreement would provide the federal government with an important trump card “in the geopolitical poker game already underway in the region,” and he is completely right. A fully mobilized and effective Nunavut would significantly strengthen Canada’s sovereignty in the region by empowering Nunavut residents to exercise their stewardship fully over territorial lands and ­resources.

Fenge’s analysis of the status and role of Nunavut, however, is only half complete. Equally important is devolution, which is the transfer of administrative authority over territorial lands and resources from the government of Canada to the Nunavut government. Currently, only Yukon has achieved devolution; although the Northwest Territories recently signed a final agreement earlier this year, it must now ratify it before it can come into effect.

Nunavut, on the other hand, does not have a devolution agreement nor have negotiations even begun. Why? In a recent paper in the journal Polar Record, I argue that three factors matter for generating devolution agreements. First, a final devolution agreement must reflect the economic interests of the federal government. Second, it must be supported by a critical mass of aboriginal groups in the region. Finally, negotiations will only commence if the federal government believes that a territorial government is fully capable of taking on the responsibilities that flow from devolution. For Nunavut, the key obstacle has been the third factor, which it continues to struggle with today.

Yet devolution is a crucial component of Canada’s ability to defend its interests in the north. If Fenge is right that what matters is empowering local residents and governments to engage in the active stewardship of northern lands and resources, then devolution is just as important as land claims implementation. The trick, then, is for federal and territorial officials to find a way to break from the negotiation models established by the Yukon and NWT rounds to quickly negotiate a devolution agreement for Nunavut.

Re: “Does Good Policy Make Good Neighbours?,” by Michael Valpy

These days, we academics are more overworked than in the past: but unlike journalists, or public servants, we are still able to choose our questions, and to then report on our findings as we see fit. I and others often choose strictly scholarly formats and venues; but sometimes scholars use systematic research to speak to a broader audience—in my case, the harassed municipal employees, housing activists, street vendors, urban planners and architects I met in the course of the research.

Michael Valpy states that my book on urban governance and municipal law in Toronto, Everyday Law on the Street: City Governance in an Age of Diversity, is “spotty,” “thin” and “short of examples.” I find this reaction puzzling, since the book has received very good academic reviews, as well as enthusiastic reactions from non-academics. But Valpy’s call for a royal commission on multiculturalism may indicate that he believes professors ought to produce nothing but the studies that such inquiries generate. I have great respect for number-crunching work on urban issues: indeed, that work has shaped my research questions and the material chosen for publication. But for this book I chose different tools.

In regard to research methods, my book draws heavily on the “everyday life of law” literature, which leaves high-level legal texts aside in order to study how ordinary citizens and low-level officials use or don’t use law in their daily rounds. Documenting how such folks create a legality that is separate from and not predicted by official law is important, especially if we are keen to know about governance processes, not just outcomes. While racial and other inequalities do feature in the book, its key aim was to document how councillors, bureaucrats and ordinary people interact to govern the city. Hence chapter titles such as “the dysfunctional dance of local governance”; hence the finding that councillors see themselves as “village elders” of their wards, not legislators.

And in regard to the often folksy writing style chosen, if Everyday Law on the Street is being reviewed by the LRC (unlike other books I’ve published), it is precisely because I decided that in this case the research ought to be made accessible to those on the front lines.

Such work may not serve the needs of a royal commission. However, given the declining influence of official research on government policy, it is perhaps time to think critically about what type of research supports policy, and what type of writing is authoritative.