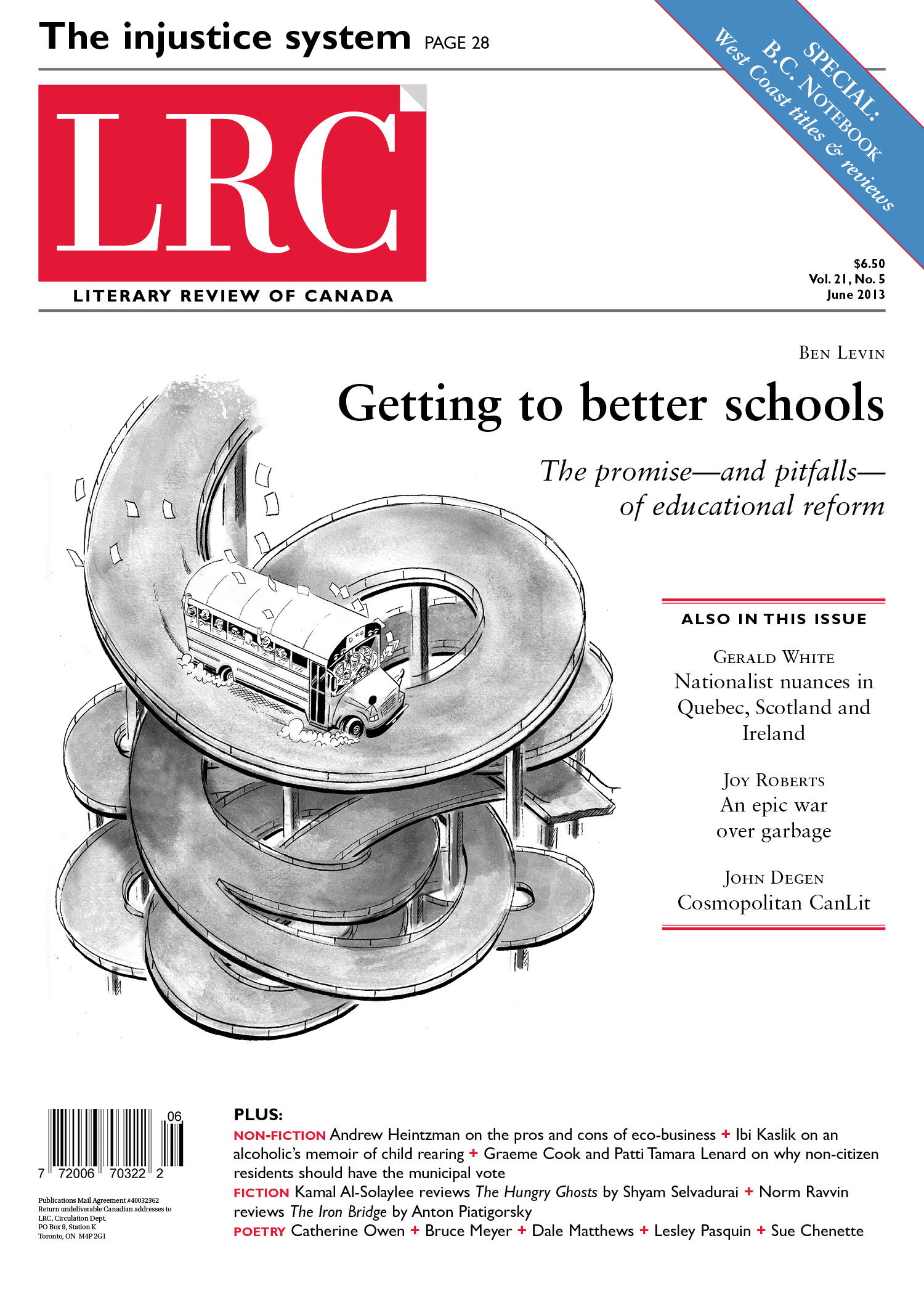 British Columbia is a quirky slice of geography. This is a province that resists quick assessment or summary, requiring informed explication to both outsiders and insiders. People seem to be happier here, or madder, more intense, or more laid back. Fortunes may still be made here from modest starts, but political careers seem to end more often in tears here than appears to be the case in other provinces.

B.C. even has its own vocabulary, terms that those in the know brandish with aplomb. SPI. TFL. DTE. ALR. Kits. Poco. Gateway. Islands Trust. Ferrygate. Surrey Six. Saltchuk. Insite. The Interior. The Coq. The VAG. The Cultch. The Drive.

We need guidebooks if we want to live here and understand our history and challenges, the kind of books that lay this place open the way the stump of a cedar tree lets us see and count and measure the accretive rings of history.

So I was delighted that the June issue of the LRC contained reviews of several books about different aspects of British Columbia.

Geoff Meggs and Rod Mickleburgh’s The Art of the Impossible: Dave Barrett and the NDP in Power, 1972–1975 revisits the politics of this province during three years of change so rapidly spun that the pace overtook good intentions and unravelled that era’s NDP government. Without this book, we risk forgetting why B.C. NDP leader Adrian Dix’s recent campaign slogan was the anything-but-incendiary “Change for the Better: One Practical Step at a Time.”

Jan Drabek’s Vladimir Krajina: World War II Hero and Ecology Pioneer reminds us that many of the people who have come to B.C. from the greater world have had fascinating histories and experiences. University of British Columbia botany professor (and war hero) Krajina understood better than many who were born here that we have been entrusted with an extraordinary natural setting, one that none of us can afford to take for granted.

Human Happiness, by Brian Fawcett, parses a family, ordinary only to the extent that any family is ordinary, striving for and in part achieving enduring happiness in B.C.’s central interior.

Journeywoman: Swinging a Hammer in a Man’s World describes author Kate Braid’s experiences as one among a tiny minority of B.C.’s women carpenters. Her book reminds us of the singular virtue that might most characterize the people who live here—tenacity—and of the strange fact that sometimes challenging and demanding environments are where one most becomes oneself.

Re: “Getting to Better Schools,” by Ben Levin

Assessing the state of Canadian educational reform is much like trying to nail jelly to the wall. In a country like Canada where education is a jealously guarded provincial responsibility and, since the 2011 demise of the Canadian Council on Learning, without any overarching federal presence, it has become a next-to-impossible challenge. That may explain why Ben Levin’s essay conveyed the distinct impression that Canadian education can be accurately viewed through an Ontario lens and educational reform treated as a projection of what amounts to the imperilled Dalton McGuinty reform legacy.

Our top-performing provinces on international tests, Alberta and Quebec, do not conform to an Ontario analysis writ large, nor do the perpetually lagging jurisdictions, Manitoba and the three Maritime provinces. While Levin accurately captures the “reform consensus” of the Canadian educational establishment, he also tends to obscure the rather chequered pattern of reform with uneven quality standards and student performance all over the map.

He makes a heroic effort to dispel any public perception that the education system is in crisis. A Ipsos Reid poll released on September 6, 2012, would tend to suggest otherwise. An overwhelming majority of Canadians (86 percent) now express concern about public elementary school children’s performance in reading, writing and mathematics. Furthermore, contrary to Levin and his allies, three quarters of those surveyed (75 percent) agreed that “standardized testing” was “a good way” to measure and compare students’ performance against other provinces and countries. To be fair, Levin accepts the fact that the system is not perfect, but then proceeds to identify supposed weaknesses like program supports for the poor, minorities, aboriginal people and students with disabilities, which are actually our current strengths, compared to most other developed countries in the Organisation for Economic Co-operation and Development. What he is really proposing is tinkering with the status quo rather than any reform agenda addressing broader public concerns.

Leading Canadian educators like Levin find it difficult to confront the system that they themselves have helped to shape and tend to have a few blind spots. More objective analysts seeking to assess the state of Canadian K–12 education would draw on the independent research of the Canadian Council of Learning and, more importantly, on the findings of its final report. It might have been helpful, for example, to reference Paul Cappon’s October 2010 assessment that “Canada is slipping down the international learning curve” and that “we’re not going to be able to compete in the future unless we get our act together.” While Levin lauds the Canadian system for “the consistent quality of our schools,” he seems to brush aside Cappon’s key finding that “we have very little information nationally about how we are doing.”

While purportedly addressing the perils and pitfalls of education reform, Levin seems remarkably resistant to the more popular panaceas—parental choice, standardized testing, teacher quality-evaluation reform and alternative charter school programs. In a nutshell, he seems to be gently and diplomatically rejecting the main tenets of the current North American education reform movement. It all sounded so reasonable that his hidden message almost escaped my notice.

As a teacher and administrator in Toronto’s downtown secondary schools, my perspective is that of a concerned practitioner who sought, throughout my career of 34 years, to equalize the educational opportunity of working class immigrant young people. I support the analysis, however Ontario bound, of Ben Levin. Schools, and those who teach in them, attempt to increase educational motivation and especially literacy in English of young people coming from homes where books and newspapers, if they exist at all, are in some other language. Such students are at an immediate disadvantage when taking standardized tests, especially if language and cultural fluency are at issue. (Mathematics is another matter.) Add to this the economic stress and time demands of after school employment, especially of boys, to support their often single parent families, and it becomes a wonder that any of these hardworking young people succeed in school.

I have always been open to science, i.e. experience based educational theory to improve our schools. When training for educational administration at Harvard, I was appalled by the failure level and dropout rates of black high school students (47% complete high school nationally) who I suspect share some of the same learning handicaps that I encountered. What we do not need in our Canadian schools is the misguided American (North American?) obsession with standardized testing, unproductive and ineffectual teacher evaluation, and privatization i.e. charter schools that have become the panacea south of the border. We would do better to study why student achievement is higher in the public schools of Quebec or Alberta, if that is indeed the case.