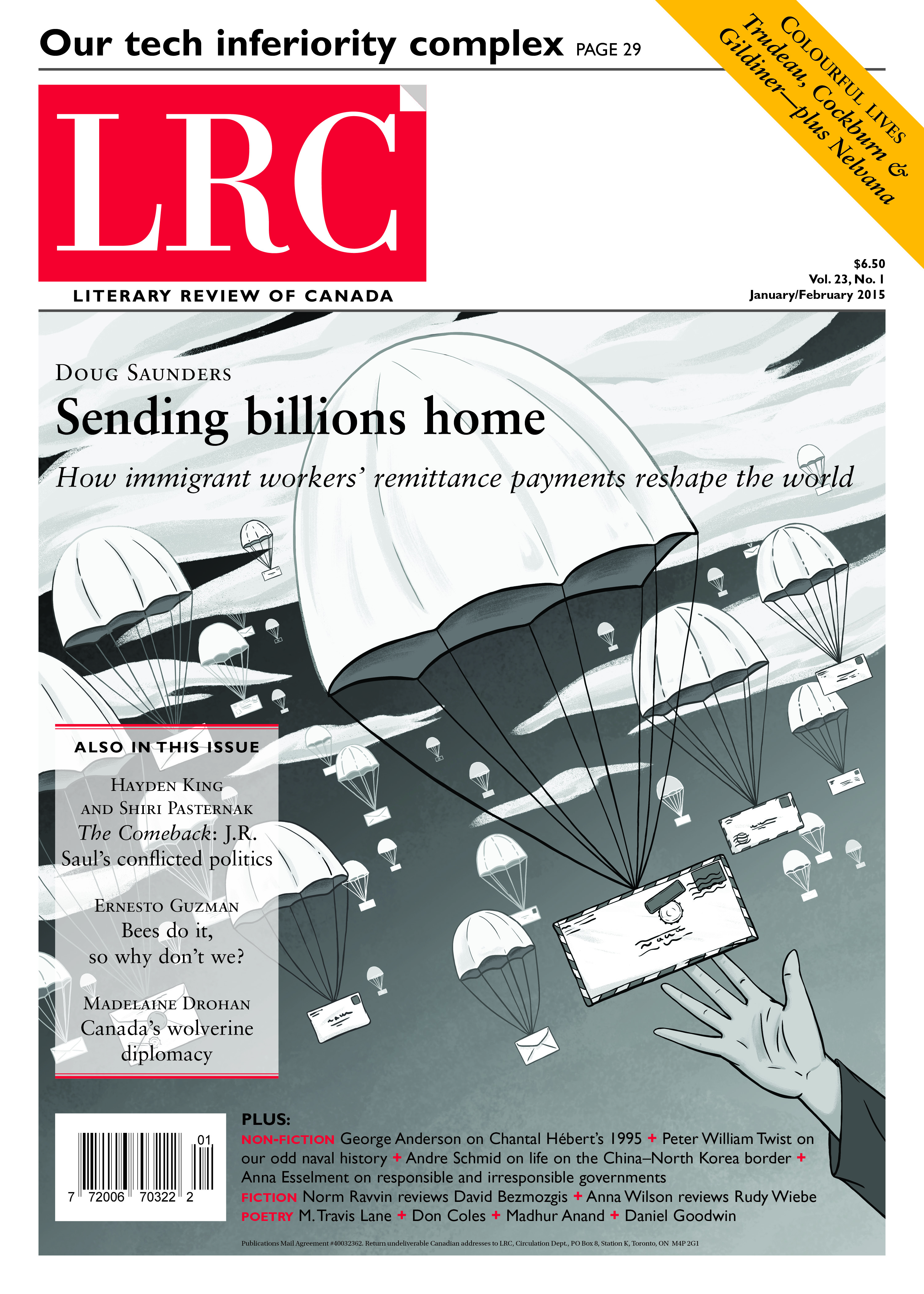 Re: “Hew That Wood, Draw That Water,” by Dimitry Anastakis

In his review, Dimitry Anastakis makes several claims about my book Asleep at the Switch: The Political Economy of Federal Research and Development Policy since 1960. He suggests I engage in a form of geographical determinism akin to what he argues is Harold Innis’s own deterministic view in his staples theory of Canadian development. This misinterprets both my work and that of Innis. One of my own key objectives was to stress the social, economic and political conditions that underpinned development in both countries, and how Fordist trends were extended to Europe and Japan after the Second World War in a different set of conditions. This is the opposite of geographical determinism.

Anastakis claims that in my treatment, Fordism remains “an amorphous concept.” Yet I provide a systematic outline of the development of Fordism in the United States and Canada in terms of its constituent features, and I use this discussion as a means of analysing why Fordism was not extended to Europe until later. There is a fairly robust definition of Fordism in social, political and economic terms that allows me to make comparisons of development across time periods and countries.

Anastakis further claims that “popgun efforts to assert federal power to develop Canadian capacity, Smardon asserts, were misguided, since ‘social relations’ predetermined Canada’s technological dependence and all the statist approaches offered were simply pissing into the wind.” But this is not accurate. My analysis stresses that events were not predetermined, but resulted from social and pol- itical struggle. That is why I focused on competing political projects throughout the book.

Finally, Anastakis claims that I neglect the “obvious exceptions to the notion that Canada is innovation-inept” and “provides no prescription, no policy direction” for what might be done, including the possibility that “maybe it is about making more and better capitalists, entrepre- neurs and innovators.” I, in fact, do discuss the exceptions, such as Nortel (now defunct) and BlackBerry, in my work. I make the point that it is precisely these exceptions that prove the rule. My work details why these “islands” of innovation were never extended within a “sea” of dependency in the Canadian economy. Finally, I do not provide a set of easy answers concerning what should be done. Changing Canadian innovation will involve altering Canadian capitalism so that the entrenched interests that continue to limit the innovative basis of the economy no longer have the same ability to narrow its course of development.

In 2009, after hearing stories of excessive remittance fees from countless low-income families around the world, ACORN International launched a campaign targeting regulation of the remittance market.

Every year, millions of Canadians send money to family members overseas. Many of the processing companies charge predatory fees. Money transfer companies and banks make enormous profits at the expense of many people living in Canada who send money to friends and family in some of the world’s poorest regions. As Doug Saunders concludes, “whatever the precise effects of remittances, it is worth ending these discriminatory costs.”

In 2014 the G20 members vowed, as they have before, to impose regulations to restrict the cost of sending remittances to a maximum of 5 percent. But we need to pay close attention to the details.

In 2009 Canada committed, as a member of the G8, to reduce the global average cost of transferring remittances from 10 percent to 5 percent. The assumption at that time was that this goal could be reached without across-the-board caps, so the stress instead has been on enhanced information, transparency and competition. While these measures may affect average fee levels, they still mean that wealthier remittance senders who send over $500 pay well under 5 percent, and lower-income families, who send much smaller amounts, continue to be charged far in excess of 5 percent.

The recent G20 statement on imposing regulations to restrict the cost of sending remittances appears to be more focused on guarantees for all remittance senders. But we will see.

At our 2011 national convention in Ottawa, ACORN members managed to leverage a meeting with the deputy minister of finance by showing up en masse at the ministry. In that meeting, Deputy Minister Michael Horgan said the current federal administration would never regulate the banks on this matter, since it would represent a slippery slope to start regulating price and consumer rights.

So we turned to the provinces. So far, efforts have been most successful in Ontario. Through our lobbying, a private member’s bill was introduced that aimed to cap fees at 5 percent, along with guaranteed full disclosure. However since then Ontario’s Wynne government has committed only to looking into targets rather than caps.

These movements are a step in the right direction, but more pressure is needed. Only with such pressure from affected communities will government start taking this issue seriously.

Re: “Don't Call It a Comeback,” by Hayden King and Shiri Pasternak

I always enjoy Hayden King’s interventions, and was glad to be introduced to Shiri Pasternak, who I understand is a Torontonian interested in the indigenous cause. This is great. A rapidly growing number of people are identifying themselves as allies, which is as it should be.

This article is a reminder of just how rich and varied intellectual life is among indigenous academics. The natural outcome is a wide variety of ideas and opinions. I describe this in The Comeback and Hayden and Shiri have added more names and ideas.

First, the central argument in The Comeback is that the problem lies with non-aboriginals, not with aboriginals. The review seems confused about this. What is needed is a revolution in how we see ourselves, how we see what we have done and what our obligations are. This could be summarized as reconciliation without restitution is meaningless.

Second, what about resurgence versus comeback? This is an unnecessary argument. Both are good words. I do have concerns about the deeply Christian roots of resurgence, central to the death and resurrection of Christ (Luke 24:46 and Acts 17:3 resurgere a mortuis). After all, aboriginals were not wiped out—although every attempt was made—nor were they miraculously resurrected by the hand of God. Rather, they successfully resisted, against all odds, and built themselves back up. That’s what a comeback means—people with power lose it or have it taken away and then struggle successfully to get it back.

In any case, both words work and both are powerful.

Finally, the review suggests that I believe Canadian institutions are “naturally good.” Of course I don’t. It then suggests that I imagine resolving the current situation would be easy. Again, I don’t. My reference to problems being easy to solve refers only to immediate and disgraceful problems, such as unclean water on reserves. The larger questions are complex. The review also imagines that I think resolving the broader issues would lead to an idealized Canada. I don’t say this. Nor do I think it.

I have no idea what would emerge following the necessary massive transfer of power and wealth. This transfer is coming even if government doesn’t want it. As for the outcome, it will emerge from the process in its own time and shape.

The indigenous reality is the single most important issue before us. Non-aboriginals need to act with that in mind. Meanwhile, I learned a lot from the review. Thank you.

Re: “Campaign Literature,” by Antonia Maioni

Laurier’s poorest Quebec showings came in his first campaign, when he was up against Sir John A. Macdonald, and in 1911, when Quebec nationalists combined with Conservatives to defeat Laurier over his plan for reciprocity with the United States. Quebec stood solidly with Laurier in his last campaign, the wartime conscription election of 1917. While Laurier’s Quebec margin varied from vote to vote, the results hardly constitute a “rejection” of either his policies or his “sunny ways.”