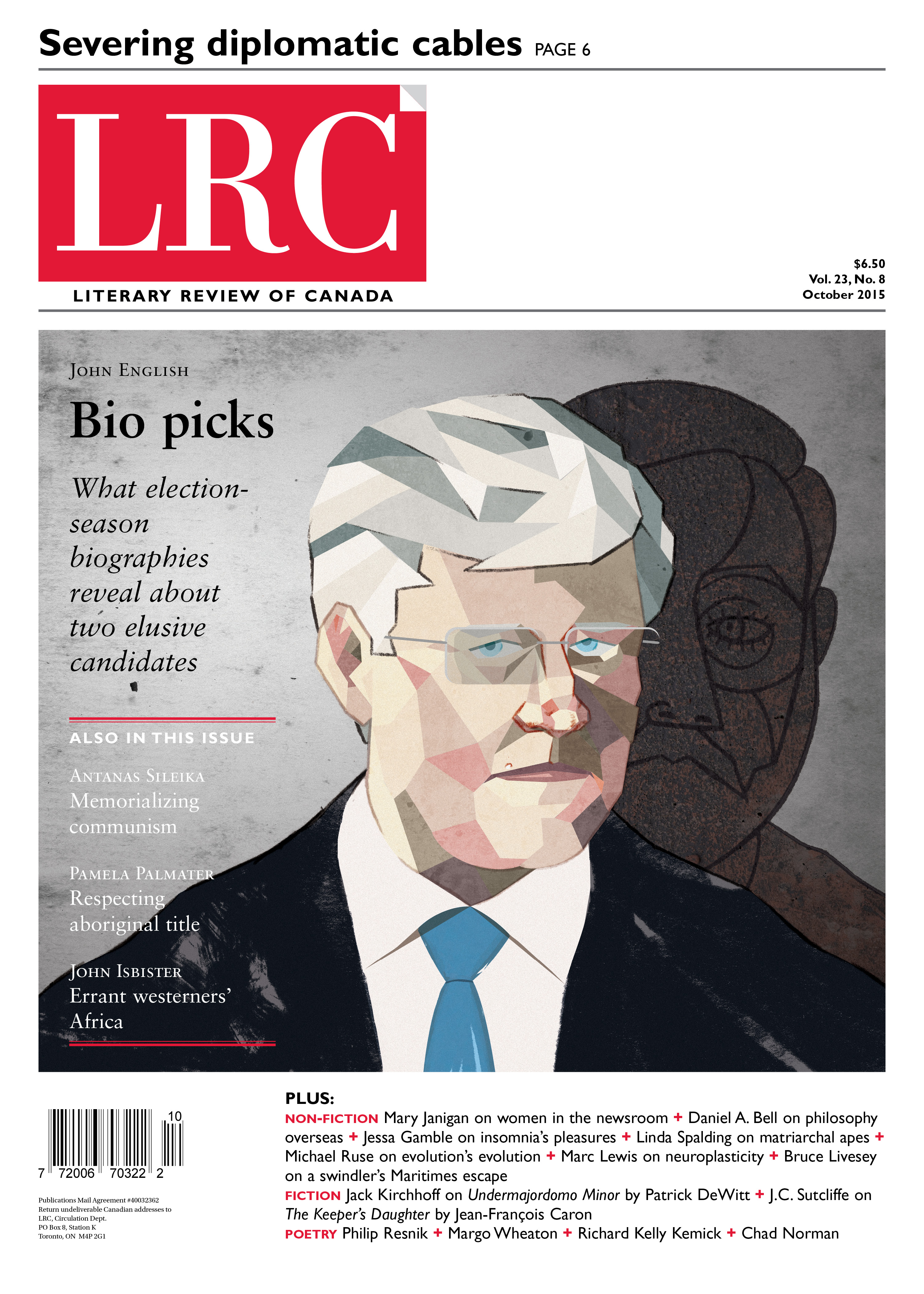 Welcome to the October issue of the LRC. Here’s what’s in store this month.

To mark the upcoming federal election, three pieces in the issue deal with party leaders and some of the issues in the campaign.

The first of these pieces is a review of a pair of books published in recent months – John Ibbitson’s Stephen Harper and Tom Mulcair’s Strength of Conviction. Our reviewer John English has considerable experience chronicling the lives of federal leaders, having written major biographies of Lester Pearson and Pierre Trudeau. English provides a nuanced view of the men at the centre of each book, complete with fascinating context surrounding their personal backgrounds and careers.

Paul Heinbecker has had a long and eventful career in Canada’s diplomatic service. This has given him the ultimate insider’s view of foreign policy under recent prime ministers, Stephen Harper included. Comparing the Harper government’s record with that of Brian Mulroney, Heinbecker comes to a less than admiring assessment. “As a consequence of inexperience or opportunism or both, the Harper government has turned foreign policy outside in,” he asserts, “with the result that the government has talked a lot and accomplished a little. Stagecraft has trumped statecraft.”

The Harper government’s plans for an Ottawa memorial to victims of Communism is another part of its record that has sparked considerable opposition. In an essay on the broader ramifications of memorialization in a Canadian setting, novelist Antanas Sileika begs to differ with the critics. “As to the detractors who say we should only remember events in which Canada played a role,” he notes in reference to the many Canadians of East European background who are in favour of this project, “those millions of immigrants and their children are indeed Canadians. Their memories are the memories of this country too.”

Depending on the result on October 19th, it is uncertain whether Harper’s plans for the Ottawa memorial will go ahead. But one issue that is bound to be front and centre regardless of the next government’s party affiliation is the question of aboriginal title. Pamela Palmater reviews a book which looks back at recent struggles by indigenous activists to regain control of traditional lands. She concurs with the book’s author that the sole way to successfully address First Nations poverty is by “full recognition and implementation” of aboriginal title. She then explains how this might be instituted in practical terms, with the overriding goal being to stop extractive industries’ exploitation of title lands without prior consent.

Another element of government policy that occasionally bursts onto the political scene is Canadian foreign aid – not least aid to Africa. How useful have our aid programs been to Africans themselves? And should our understanding of African realities be rethought, especially as the continent’s geopolitical importance expands? In a review of two books, John Isbister explains how the efficacy of Canadian aid has been patchy at best, and shows why Western observers, especially economists, need to adopt a less schematic view of African development if this efficacy is ever to be substantially improved.

Those who are not professional scientists rarely spend much time wondering about the beliefs of famous scientific figures from the past, especially in areas outside the domain of these figures’ discoveries. The beliefs of Charles Darwin are an exception. Michael Ruse identifies the reasons for our continuing fascination with Darwin’s personal outlook in a review of a book on the history of evolutionary theory. “Evolution is not just a theory among equals,” Ruse notes. Even now, over a century after its appearance it is “not only magnificent but in many respects deeply worrying.”

In addition to all this, Marc Lewis dissects the discoveries of guided neuroplasticity; Bruce Livesey tracks an American fraudster’s attempt to escape to Canada; Linda Spalding details a campaign to save Africa’s bonobo; Mary Janigan delves into the subtle sexism pervading many newsrooms; Daniel Bell illustrates the positive cultural interactions that can be sparked by philosophy; and Jessa Gamble explores the insomnia-driven features of contemporary culture. Jack Kirchhoff and J. C. Sutcliffe review new novels by Patrick deWitt and Jean-Francois Caron, while our poetry pages feature the works of Philip Resnick, Margot Wheaton, Richard Kelly Kemick and Chad Norman.

In this month’s letters section there are responses to reviews by Debra Komar, Mark Sholdice, Triadafilos Triadafilopoulos and Michael Webb in the September issue from Monda Halpern, Shadia Drury, Erna Paris and Alain Deneault.

All in all, a roster that I trust provides suitable diversion from end-of-federal-campaign blues.