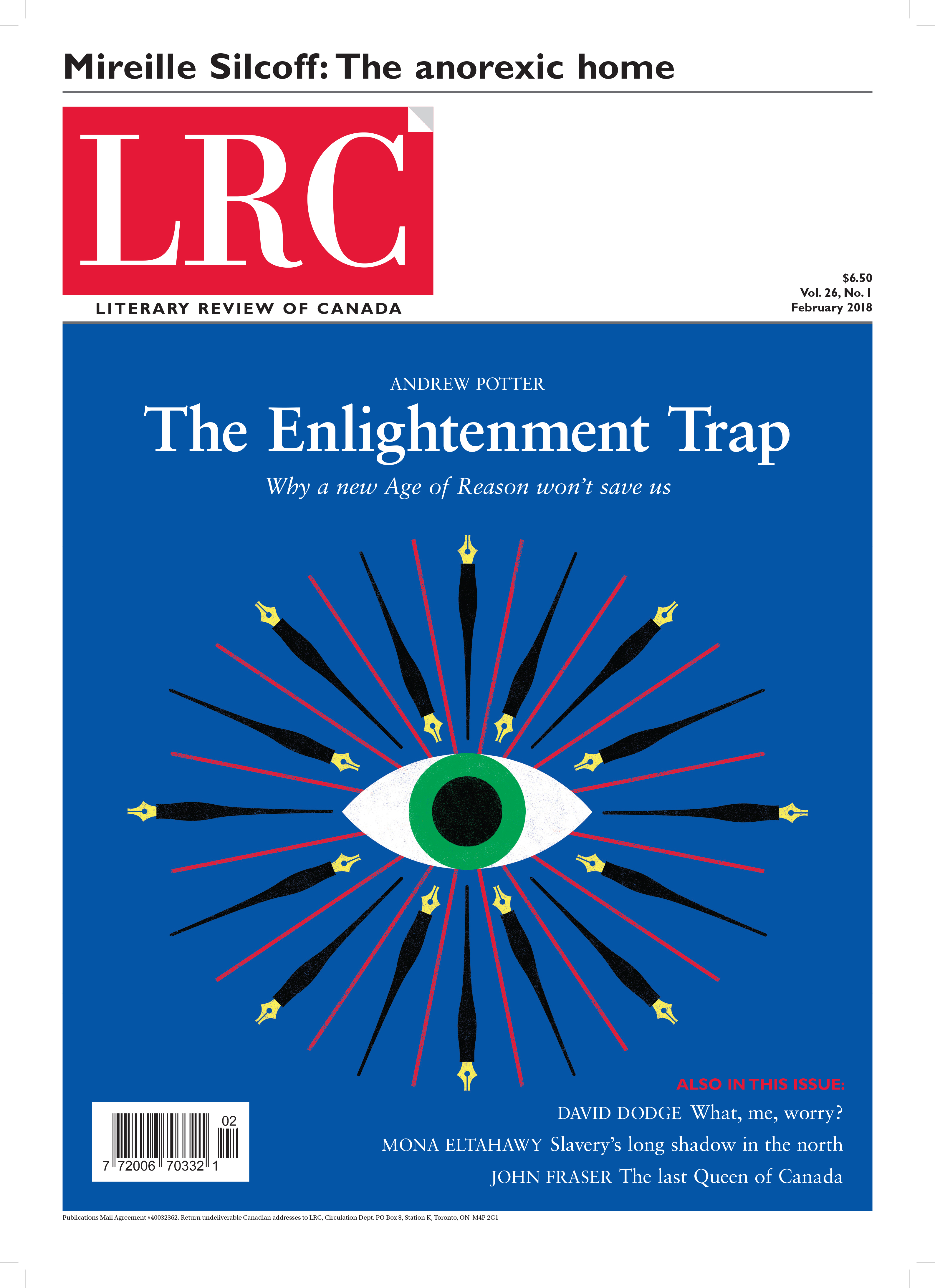 Re: “Steven Pinker, and is Enlightenment enough?,” by Andrew Potter

We need to stop turning up our nose at the Enlightenment, to resist rolling our eyes at those who were undoubtedly overwhelmed by Newtonian physics. It’s better to learn the Enlightenment through both its proponents and detractors: Voltaire, d’Alembert, Condorcet, Rousseau, and Mably together with Giambattista Vico and J.G. Hamann. Better to see the Enlightenment and the Counter-Enlightenment as two sides of the coin called reason. Only then do we give ourselves
a chance to go somewhere new.

Upon what faculty would we be relying if not reason? The quick answer is vision. Vision does not argue, but always seeks out a better alternative, a higher resolution that, when it works, makes us forget what all the fuss was about in the first place.

Re: “Swedish death cleaning and the anorexic home,” by Mireille Silcoff

Mireille Silcoff’s highly entertaining critique of minimalist home organization books includes extreme examples of home organizing ideas. The unfortunate effect is persuading the reader that taking up the ideas in these popular how-to books is unhealthy.

I have worked as a professional organizer for more than a decade, first in Calgary, Alberta, and now Guelph, Ontario. My job has surprisingly little to do with helping clients purge, beautify, and find a place for everything and more to do with guiding them through times of transition. Our relationship to our home and our stuff is not just about consumerism and decor, but the process of human survival—and it is a process. Skipping the “rampant overcorrection” of decluttering and even death cleaning would hinder the process of rediscovering what it is to be human.

In a world mired in isolation and mental health issues, there is an overwhelming movement toward mindfulness, community, and living a simple life. The pendulum of healing must swing far to the left and then far to the right before it finds equilibrium. After an era of filling our empty homes and hearts with expensive and ultimately unsatisfying things, we find ourselves in the other extreme of ridding our lives of items that do not bring us joy. I believe that our physical space mimics our inner headspace, and therefore letting go of unnecessary stuff opens up room to discover what really matters.

Reading Silcoff’s brilliant essay on minimalist mania cured my white-sofa envy. Reframed as a symptom of the trend towards anorexic domesticity, that sofa instantly lost its appeal. I trust that her essay will have had the same miraculous healing powers for many LRC readers, and at $6.50 an issue, that makes it some of the cheapest and most effective therapy available.

But it’s worth bearing mind that the current prophets of the domestic purge, Marie Kondo & co., were not the first. In 1882, Oscar Wilde spent a year lecturing Canadians and Americans about how their homes were crammed with shams. “The house beautiful” and “The decorative arts” lectures were like show homes into which Wilde invited his audiences. As the aesthetic lord of the manor, he opened the door onto a more gracious domestic scene and suggested that their lives would improve if they surrounded themselves with true beauty. He advised removing many of the usual objects he had seen in their homes: no taxidermied animals, no artificial flowers, no embroidery-covered piano, no cast iron stove, no carpeted floors, no clashing colours, no Gothic furniture, no “great flaring gas-chandelier,” or “horrible pictures of historical scenes.”

In sum, he proposed to get rid of their obnoxious clutter.

Re: “David Dodge on the cost of cheap money,” by David Dodge

Dodge’s stance on fiscal and monetary policy here is glaringly inconsistent with the stance taken in his May 2009 Doug Purvis Memorial Lecture to the Canadian Economics Association. However, he not only offers no explanation for his change in views, he doesn’t even acknowledge it.

He said then that “to preserve confidence in the future stability of public finances it is very important that Canadian governments (federal and provincial) now make commitments to reduce (eliminate) the new discretionary spending or to increase taxes in order to regain fiscal balance as quickly as possible after 2010.” This was because our aging population made it “very important to enter the second half of the next decade with low levels of net public debt.” As it happened, the Harper government only achieved a surplus in 2015-16, amounting to
0.1 percent of GDP, and the Trudeau government that succeeded it pushed us back into deficit and has massively increased our net debt. Yet now Dodge writes:  “Since governments—especially the Harper government in Canada—were overly zealous in reducing fiscal stimulus, central banks found themselves needing to provide some support for growth.” It seems that Harper is now to be castigated for following Dodge’s advice, while Trudeau is not to be criticized for ignoring it.

An inflation-targeting central bank like the Bank of Canada or the Bank of England would, other things being equal, follow a tighter monetary policy if there is a lower target inflation rate. However, Dodge rejected lowering the target rate below two percent in 2009.

Dodge notes that between 2011 and 2016, “inflation remained well below the two-percent target” for Canada, the U.S., the U.K., and Germany. This is incorrect for the United Kingdom. From 2010 Q1 to 2016 Q4 the annualized consumer price index inflation rate was 1.93 percent, so by any reasonable standard the Bank of England met its target. For the other countries what he said was more or less true.

However, this only creates more problems for Dodge. In his 2009 lecture he pronounced himself in favour of price level targeting. In a price level targeting framework, central banks wouldn’t even dream of hiking interest rates. They would instead be dropping them to try to achieve the higher inflation rates required to balance off years of below two percent inflation. Dodge can’t see how his policy prescriptions are completely out of sync with what he has laid out as an appropriate framework for monetary policy.

Contrary to Mr. Baldwin’s assertion, my views on the general appropriateness of the principles of sound monetary, financial stability, and fiscal policies have not changed since my 2009 lecture. Flexible inflation targeting remains the best guiding principle for monetary policy, and prudent control of public debt the fundamental principle for budgetary policy. However, economic and financial conditions have changed greatly since 2009. As economic conditions change, the appropriate application of those policy principles should evolve. When distant early warning lights begin to flash yellow, prudent policy makers take notice.

Re: “Quiet, and not entirely a revolution,” by Graham Fraser

Graham Fraser’s recent review of my book, The Hand of God: Claude Ryan and the Fate of Canadian Liberalism, 1925-1971, raises several issues critical to the art of biography. The standard of successful biography remains the full elucidation and presentation of the subject’s self-understanding, and the location of that self-understanding in the context of his or her society and culture. This may diverge in significant respects from the memories of those who knew (or thought they knew) the subject. While praising the book as “dense” and “rigorous,” Fraser offers the bizarre assertion that the book is not about Claude Ryan and the fate of Canadian liberalism; rather, “it is much more about Claude Ryan and the fate of Quebec Catholicism.” This draws a dichotomy between religion and political ideas that Ryan, and many of his generation, would have viewed as both artificial and nonsensical. Catholicism, for most of the 20th century, was deeply imbricated with a variety of socio-political ideologies in Quebec, including liberalism. Ryan and many of his contemporaries defined themselves around the idea of Catholicism as the seedbed of social progress and political reform. Indeed, I can only account for Fraser’s assertion on the basis of a conflation of liberalism and the Liberal party.

This brings me to my second major point. Part of Fraser’s critique stems from the fact that he seems to have envisioned a biography that focused largely upon Ryan’s career in the Quebec Liberal party. There are two reasons why I did not pursue this dimension of his life. To write a similarly “dense” and “rigorous” analysis of this portion of his life, I would have had to investigate a wide range of manuscript sources in the papers of premier Bourassa and the cabinet, all of which remained private as this book was researched. Secondly, there is a clear intellectual reason. Most of Ryan’s papers and writings reflect his own preoccupation throughout his life with cultivating the persona and stature of a public intellectual. This, and not his role as a politician, was the core of his very being. While this may not be to the taste of journalists who knew Ryan as a politician and who judge him accordingly, it does try to remain faithful to Ryan’s own self-understanding.