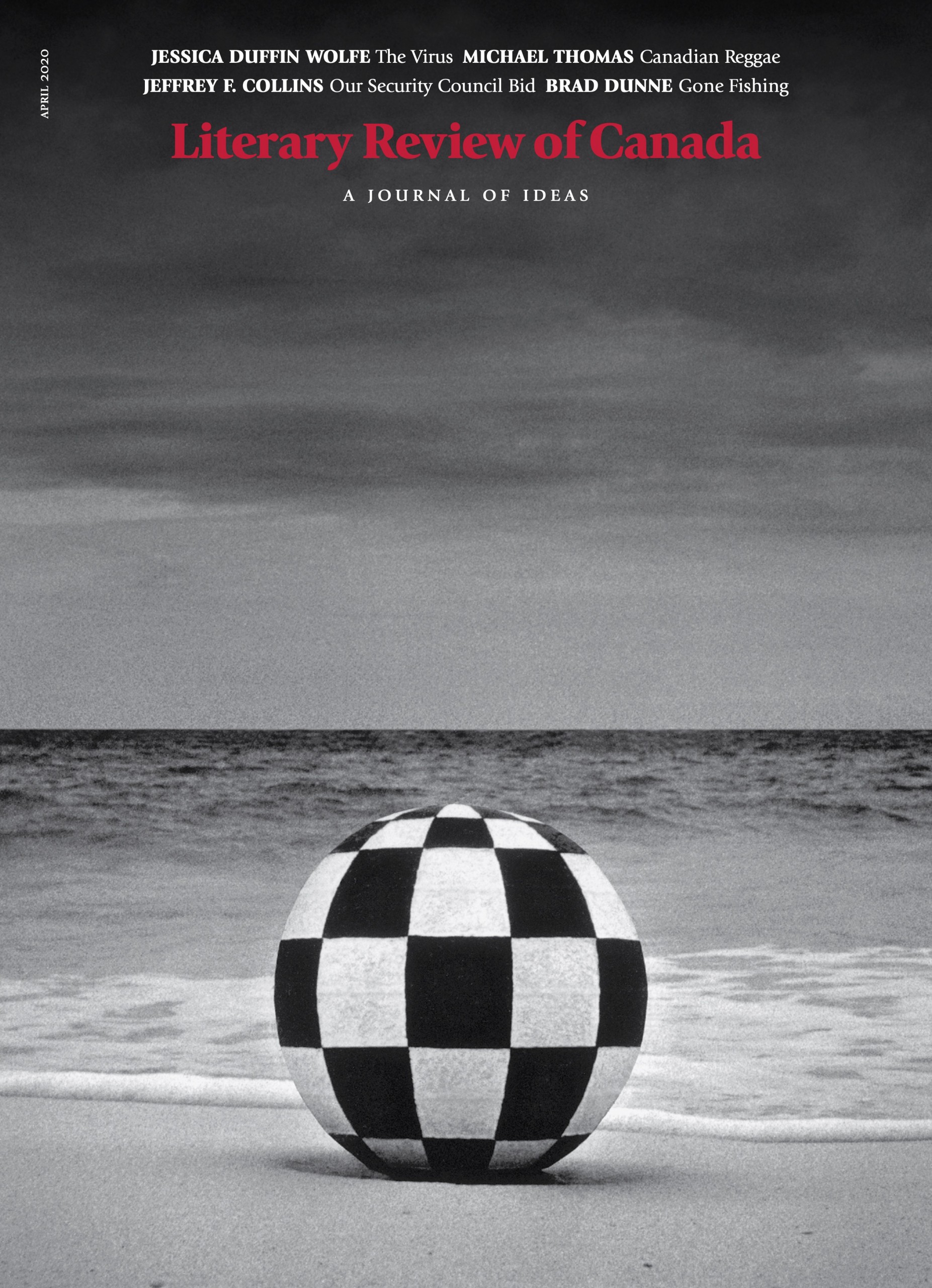 In response to last month’s call, we received a bumper crop of suggestions for new collective nouns, or “pluralia.” Below are some favourites. I continue to accept ideas — keep them coming!

Re: “Collision Course,” by John Baglow

John Baglow has benefited readers with his thoughtful and somewhat begrudgingly admiring review of Tom Rand’s The Case for Climate Capitalism and Paul Huebener’s Nature’s Broken Clocks. However, he does them a major disservice by declaring, “Both writers are dreamers.” (He also accuses Huebener of being among “those who offer few practical solutions for change.”)

As the unprecedented policy responses to the coronavirus pandemic demonstrate, nothing like a crisis disrupts mindsets that preclude exploring new ideas. It is Naomi Klein who now quotes Milton Friedman’s admonition: “Only a crisis — actual or perceived — produces real change. When that crisis occurs, the actions that are taken depend on the ideas that are lying around.”

More than ever, we might act on Rand’s and Huebener’s ideas. Rand thinks through the lens of systems. He makes far-reaching but practical recommendations that are obvious points of departure for the changes we need. For his part, Huebener’s book focuses our attention on the formidable communications challenge of appropriately engaging the public in our existential endeavour. When he says, “If the Anthropocene is made of cement, then thoughtful narratives are the weeds that crack the sidewalk,” he’s proposing a practical and profound solution.

Re: “Taking Stock,” by Brad Dunne

In his review of my book, Cod Collapse, Brad Dunne writes, “By now, enough ink has been spilled about the rise and fall of the North Atlantic cod fishery to fill an ocean.” I’d suggest there are other measures to consider beyond the half-dozen titles about the 1992 moratorium.

The ink is still fresh on Canada’s revised Fisheries Act. Until its amendment in 2019, the legislation offered no accommodation for species recovery. The prospect that modernized policy will inform modernized practice is bleak, evidenced by Fisheries and Oceans Canada’s decision to continue to increase the annual quota for northern cod. (Related to this, a ­clarification: while the moratorium continues, DFO operates a limited, seasonal commercial fishery called the “stewardship cod fishery” in addition to the recreational “food” fishery.)

Twenty-eight years after the collapse of the fishery, there is no recovery plan for northern cod, which remains the unfortunate record holder for greatest numerical reduction of a species in Canadian history. In 2019, Oceana Canada reported two-thirds of Canada’s marine stocks are in either a cautionary or a critically depleted zone — and the majority of those considered critical are Atlantic groundfish like northern cod. Last year, the scientists George Rose and Carl Walters argued DFO understated the role overfishing played in the early 1990s collapse. Theirs is not the first assessment to suggest this, but the repeated error has informed decades of management measures to increase fishing, despite stocks falling well below the “precautionary lower limit for spawning stock biomass.” This isn’t about just how much we fish, but how we do it. In Newfoundland and Labrador, for example, gillnets remain the cod-fishing method of choice even though other methods like handline and cod pots are more sustainable and reduce bycatch (unintentional fishing of other species).

Much ink — from best evidence to modernized policy — has not yet translated into improved practice. Until it does, perhaps we ought to spill a bit more, at least until policymakers begin acting in our best interests.

Re: “The Human Factor,” by Michael Taube

I was disappointed that the review of The Human Factor, by Scott P. Stephen, made no mention of the Indigenous role in the Hudson Bay Company’s reach and success. It mentions only that the Cree attacked the HBC. While Stephen may or may not have included discussion of Indigenous connections, I was looking for the reviewer to at least acknowledge their existence in the trade chain. Michael Taube even gave a nod to the French voyageurs as scouts but managed to entirely ignore the Indigenous links that made everything else possible. And, of course, Indigenous women also became wives of employees and eventually part of the Métis Nation.

Re: “Is This Seat Taken?,” by Jeffrey F. Collins

Jeffrey Collins puts Canada’s United Nations predicament into valuable perspective. The sad truth is that Canadian governments — bon temps, mauvais temps — have been walking us back from the world for decades. On nominal 2018 GDP of $2.2 trillion, Canada spent about $6 billion on aid and $22.3 billion on defence: that’s 40 percent and 51 percent, respectively, of what the OECD and NATO expect.

Our failure to launch is old news. Canadian defence spending faltered in the early 1960s; aid spending peaked in 1987 at only 70 percent of the expected target. Can soft power, reputation, and the private sector substitute for more traditional tools of global influence? We’ll find out in June, when Canada must out-poll Ireland and Norway — both of whom spend a higher share of GDP on aid than Canada now does.

Three issues loom over our absence from the council since 2000. Massive twenty-first-century tragedies in Iraq, Syria, and Ukraine have hurt UN credibility. China’s current reprise of Soviet obstructionism of yore is further impairing its ability to promote international law and fundamental freedoms, as Uighurs can attest. Finally, the legacy of the First World War remains enduringly traumatic and deeply divisive, as Mathilde Montpetit reminds us in the same issue, with “His Duty.”

Canadians have been eager, but we have been inconsistent internationalists. We wanted a League of Nations, but the United States declined to join. We supported the UN, but the Soviet Union and the People’s Republic of China had other plans. We championed the International Criminal Court, the Human Rights Council, the Responsibility to Protect doctrine, and the Refugee Convention, but dictators (with the U.S. playing a cameo role) targeted each in turn. We’ve been hosting parties to which few come.

Why invest in aid, defence, or even diplomacy when larger powers inevitably undo the benefits? For Henri Bourassa, whom Montpetit discusses, the answer was simple: foreign entangle­ments meant imperialism; Canadians did best to remain at peace and at home. Bourassa died in 1954, midway between our first and second terms on the Security Council. Two years later, the Suez Crisis erupted, emboldening Khrushchev to invade Hungary. Two months after we lost our bid for a seventh term, in 2010, the Arab Spring began; our abandonment of Syria was Putin’s cue to invade Ukraine.

So yes, the world is complicated; on far too many issues, dictators have the initiative. But if responsible states give up on peace, democracy, or human rights, things will get far, far worse.

Canada should meet or exceed the OECD and NATO targets, and get back on the council.

Re: “His Duty,” by Mathilde Montpetit

Mathilde Montpetit writes of Henri Bourassa and Wilfrid Laurier: “Though their relationship was never without stumbling blocks, it was the Second Boer War that would ultimately sour it.” That statement reminded me of a family story from that time. My grandfather James S. Brierley (1858–1935) was president and editor of the Montreal Herald from 1896 to 1913 and ran it as the city’s only English-language Liberal paper. He apparently did or said something critical of Canada’s involvement in the war. I often heard from my father how my grandfather later regretted the lost advertising revenue his stand had caused. He would also complain that Henri Bourassa was the only Montreal newspaperman who could get away with criticizing the war.

Re: “Everybody’s Face but Their Own,” by Patrick Warner

Thank you to Patrick Warner for putting convincing (and engaging) words around a feeling that has hemorrhaged my enthusiasm about CanLit in recent years. I thought it was that everyone had gone to the Thesaurus School to sound fabulous but meaningless and mundane. His is a much more satisfying explanation.