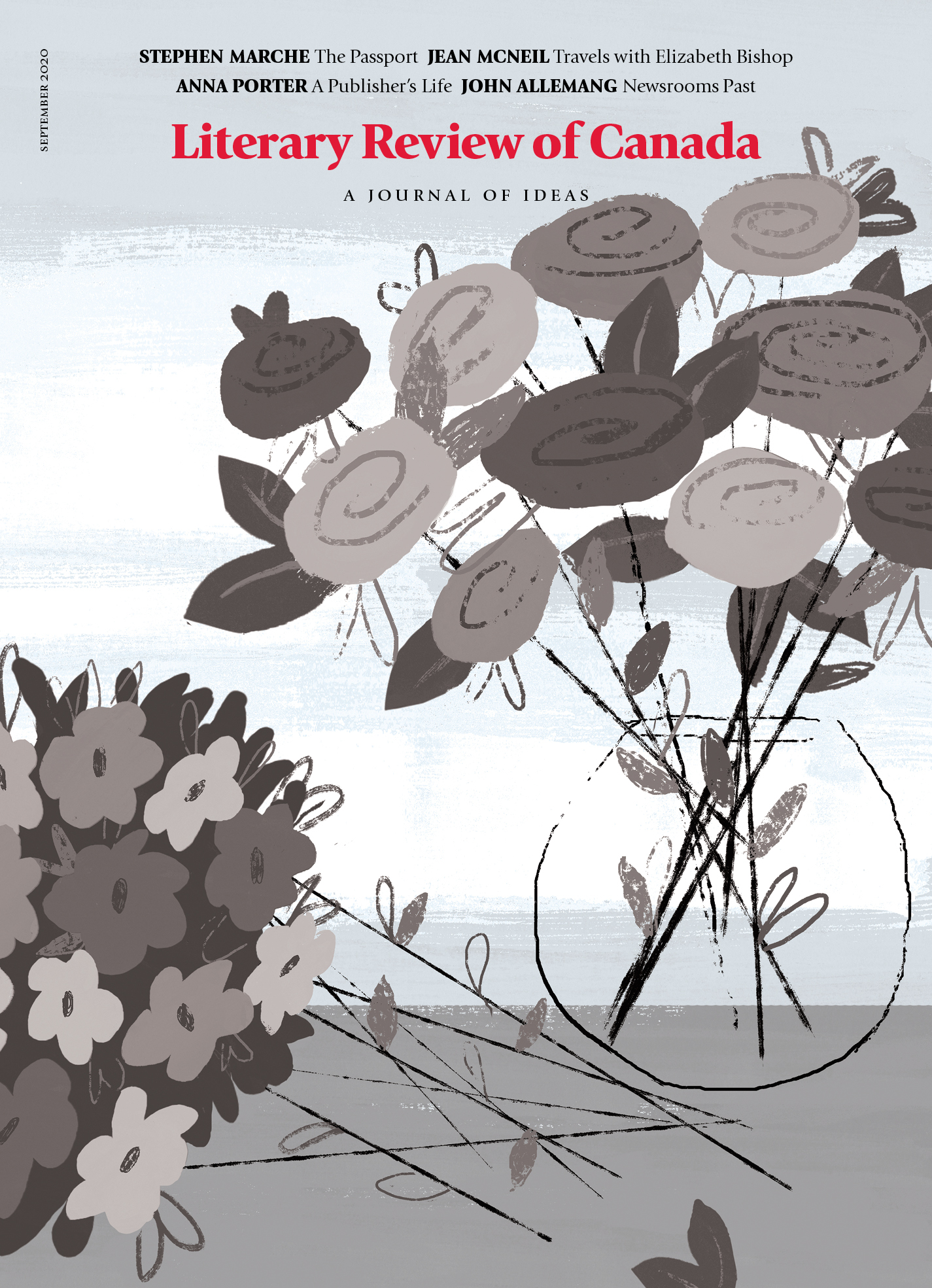 Re: “The Passport,” by Stephen Marche

Stephen Marche has touched on the core and values that I myself, as a Canadian living abroad for the past thirty years, could never put into words. I have felt what he was saying but could never express it to those who have asked, “Do you ever miss Canada?”

Yes, of course I do! And for most of the reasons that Marche articulates: the security, the infrastructure, the Crown corporations, the views, the human instinct of survival during the –40 C winters.

I’ve lived in the United Kingdom since 1991; the launch of my restaurant businesses was well received by the Brits. We’ve had award-winning success. Labour cost, corporate taxes, start-ups with private funding, and the sheer volume of dine-in eaters — it just seemed easier here back then.

But after raising three kids and approaching my retirement, I linger on where my heart wants to find that rocking chair on the porch. It’s nowhere else but Canada. I shall be back for all those reasons Marche describes and more.

I love it when I feel like someone has opened the top of my head, scooped out the tangle of thoughts and put it all into a nice, orderly, comprehensive document. Good work! Thank you.

Thanks, Stephen Marche, for articulating being Canadian, and reminding us of our good fortune in holding that slim, blue, and elegant booklet.

“Canada wants to keep you in your place,” writes Stephen Marche, in his meditation on Canadianness. And yet he is unable to see the violence signalled by that statement.

The orderliness he unpacks — that Canadian love for institutions, that internal logic of self-preservation — works itself out not just against the landscape but against the bodies of its others. There is so much masculine colonial logic at play in our elucidations of national structure — in the taming of the wilderness, in the battle of orderliness and “culture” against “nature.” Marche draws a straight line from settler-colonialism to Canadian institutionalism. That should disturb us more than it comforts, and not just for its enervating effects on Canadian excellence. The stakes are way higher than productivity or cultural innovation.

Administration, orderliness, paperwork, passports — these things sublimate the violence that undergirds a modern nation-state. They are the most anodyne manifestations of something omnipresent and unfriendly, often deadly. I can tell you — as could Colten Boushie and Chantel Moore and Regis Korchinski-Paquet, had they lived — that Canada’s penchant for orderliness masks more violence than Marche can imagine.

For many of us, the slim elegance of that blue passport represents a false promise. We are not safe, even when we have been accepted “into the garrison.” It was simply not built for us. (Some of us — like temporary foreign workers in southern Ontario — are made precarious, in service of that stalwart Canadian stability.)

We should take “a good long look at ourselves now,” as Marche says. But let’s make sure we can actually see what lurks beneath the surface.

This is a fabulous piece. For me, as a Kiwi ­living in Australia, the feeling of home resonates. Fortunately, I am privileged to enjoy Australasia — two countries where, like Canada, we have made the best of the institutions we inherited from the British.

Canada survived the 2007–08 global financial crisis with well-run and regulated banks. And like Australia and New Zealand, it seems to be making a reasonable fist of COVID-19. All the while, the United States has been on a downward spiral on many fronts for many years.

In my thirty years as a Canadian expat, only two pieces of writing have captured for me, and for curious Americans I know, what it is exactly that makes the two places distinct — neighbours but worlds apart. The first is Let’s Talk about Love: A Journey to the End of Taste, which explains Céline Dion and the whole French Canadian thing with more humour and empathy than you’d think the subject demands. And the second is Stephen Marche’s piece about our fierce love of system, the belief in freedom as the freedom to rot, and the renewed power of the Canadian passport.

I appreciated Stephen Marche’s point that the Canadian passport has taken on new resonance in the COVID-19 era, but I found his overall take on Canadian identity frustratingly predictable. He either forgets or ignores the fact that our “orderly” country was founded on the violent, ongoing dispossession of Indigenous peoples from their lands. Many Indigenous world views see nature not as “obliviating” or “lifeless,” but as a relative worthy of care and as a storyteller worth listening to. Settler Canadians such as Marche and myself would do well to heed these perspectives, since the belief that nature is lifeless is exactly what has enabled us to destroy it. I am disappointed that Marche had to resort to hackneyed colonial tropes in order to make his point.

I enjoyed “the Passport” very much. I don’t agree with everything in it, but of course it is written with generalities that are used for effect, not accuracy. But I must say, having a Canadian passport at last is a huge relief, and though I may never need it again, and may therefore never need to carry it on my person, it will always be near to my heart. I’m grateful far beyond words to be living in Canada as a Canadian.

When I came here in 1970, Canadians were immersed in the question of “Who are we?” They had gotten as far as “We’re not British and not American.” We’ve come a long way since then, but as Pierre Trudeau indicated, there isn’t one definition or characterization that fits all. Like Quakers (which I am), Canadians are often described by what they aren’t. And though I certainly do not deny that racism exists here, and I know not everyone embraces the beautiful mosaic that is Canadian society, at least we do not require that everyone get into the same pot and be melted together (and then hop out of the pot and rant on about individualism).

Marche asserts that we love orderliness and “samey-samey” in Canada. In some ways, that is so, but we are quite free to be individuals within that orderly framework. Contrast that with the United States, where individualism is somehow the enemy of diversity, an oxymoronic stance that defies rational analysis, especially considering the aforementioned melting pot.

I agree that our prime minister staying home as he enjoined us all to do — working there as he looked after his three children, with his wife self-quarantined — was an excellent example of “we are in this together, and we will get through this together.” Justin Trudeau has the same feet of clay that other leaders have, but his first acts in the face of the pandemic were not denial and nose-thumbing and dangerous lies and actions.

Marche also states, “The entire tone of our public life has been shaped by institutionalism.” Here I would argue that this is only partially true and only partially not good. Having lived into adulthood and voted throughout adulthood in the U.S., I would say that the individualist, competitive, “everyone can be a millionaire in the land of opportunity” falsehood is not a better way to run things. Not everything has to escalate, not everything has to be more and more profitable, bigger, more powerful, more voracious. It is reasonable that some things level off and simply stay healthy, like trees and people and robins and five-lined skinks do, all of which would be grotesque and unsustainable if they just kept on growing and growing and growing.

I think that “institutionalism” is what made possible the Truth and Reconciliation Com­mission, and though we are very far from achieving the goals of its recommendations, we have at least made a start — and people have been heard. Marche rants a bit about Canadians’ propensity to “become strong, durable, productive, uncomplaining cattle,” and the lack of artistic scope or innovation in Canada, and here again I disagree. As an independent freelance storyteller, I have thrived in Canada, without the support of institutions or even much in the way of orderliness. We are generally mavericks of various sorts, but we are a nice lot cuz we’re Canadians.

I know other Canadians who are far less sanguine about this country than I am, and they are entitled to their views, certainly. And I am not without a certain level of cynicism myself; I do see the flaws of governments, institutions, economy, and “national character” (if you will), but as Marche says, “Others have made me safe. I am grateful.”

Our world is imperfect. My chosen country is imperfect. Human beings are imperfect. I am most certainly imperfect, but having lived in both the U.S. and the U.K., I have to say that I am grateful — grateful beyond imagining — to live in this imperfect Canada.

Re: “Wanderings,” by Jean McNeil

I enjoyed immensely Jean McNeil’s moving piece, and her gifting me yet another aunt. I can see how confusion might have ensued.

For the record: I am not a nephew of Lota de Macedo Soares, though Lota is herself aunt to Leyla da Silveira Lobo, who married one of my mother’s brothers, Carlos Augusto. I am Leyla’s nephew. (Leyla can be seen reciting poetry in many YouTube videos.) I went to the United States with my family in 1963, when I was fifteen. Bishop was still living in Brazil. Though my parents corresponded and saw Bishop constantly when she visited the Bay Area, I was to see her again only after childhood when, nominated by professors at UCLA, I was invited to interview for the Society of Fellows at Harvard in 1975 and looked her up. The society accepted me as a junior fellow, and I spent much time with Bishop during my three years of residency in Cambridge. Her references to me in her letters were not to the boy I was but, for better or for worse, to the young man in his late twenties in the ’70s.

I apologize for this error of association, which is partly explained by the passage of time: nearly thirty years have passed since Ricardo and I had an enjoyable discussion that day in Rio de Janeiro. I am grateful for his clarification.