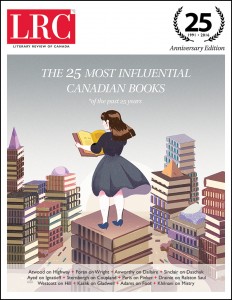 Naming the 25 Most Influential Books among approximately half a million published in Canada since 1991 is no small feat, and no doubt some injustices have be done. But what more appropriate way for the LRC to celebrate its milestone 25th anniversary of being at the forefront of the conversation about Canadian books and ideas than to examine the impact of the written word?

While the current and past editors of the LRC are a smart bunch, even they needed a framework in order to narrow down the field. We limited our selection to the books the LRC would have typically reviewed in that time frame, rather than the much larger selection of books published each year: approximately 70 percent were serious, general-interest non fiction titles, and 30 percent were literary fiction. All were published in English.

Because we were on the hunt to measure influence, there was an inherent bias toward books that were published earlier in the period, since influence is easier to judge with the passage of time.

Canada is blessed with many excellent writers, of course, so many influential books predate 1991. So, for example, In the Skin of a Lion by Michael Ondaatje and Mordecai Richler’s The Apprenticeship of Duddy Kravitz, or, for that matter, many of the books on the LRC 100, which we compiled for our 15th anniversary, do not appear on this list.

The jury established several benchmarks by which to measure influence. We compiled statistics on prize nominations and wins from 1991 to 2016. We looked at the number of academic citations a book received or its inclusion on university reading lists. We examined sales, both domestically and internationally. And we argued long and hard about the more subjective measure sticks: what books moved public opinion, affected policy debate, or challenged political or cultural schools of thought.

In short, what books did we—and you—argue about over the dinner table?

A note about process: in late 2015, we sent out a call for nominations of books, inviting submissions from LRC readers, contributors and the general public. But, given we’re the LRC, we asked for the same high standards in the nominations as we seek in the essays and reviews that we publish: longer is better. Nominators were asked for a minimum of 250 words, not simply the title of the book they wished to nominate.

Combined with the strongly held views of the LRC editors, these nominations ensured a lively and challenging selection process. The jury met three times and engaged in verbal combat. Emotions ran high, heated words were exchanged and, finally, the white smoke emerged from the chimney of the LRC: the LRC 25 had been chosen.

We hope you enjoy encountering the books and their rationale in this supplement, either for the first time, or through the return of a remembered favourite.

The LRC believes strongly that books are the architecture of society. Writers who grapple with the long-form exploration of ideas—in fiction as well as non-fiction—provide a fundamental and irreplaceable function. We salute them, and thank them, for enlivening the public debate and helping us create the kind of society in which we want to live.

Citizen of the World and Just Watch Me:
The Life of Pierre Elliott Trudeau
by John English
Presented by Michael Valpy

Clearing the Plains:
Disease, Politics of Starvation and the Loss of Aboriginal Life
by James Daschuk
Presented by Niigaan Sinclair

Shooting the Hippo: Death by Deficit and other Canadian Myths
by Linda McQuaig
Presented by Bruce Campbell

Sisters in the Wilderness
by Charlotte Gray
Presented by Alissa York

A Fine Balance
by Rohinton Mistry
Presented by Rashi Khilnani

Nation Maker:
John A. MacDonald: His Life, Our Times
by Richard Gwyn
Presented by Patrice Dutil

Fire and Ice:
The United States, Canada and the Myth of Converging Values
by Michael Adams
Presented by Dimitry Anastakis

The Better Angels of Our Nature:
Why Violence has Declined
by Stephen Pinker
Presented by Erna Paris

The Book of Negroes
by Lawrence Hill
Presented Grace Westcott

No Logo
by Naomi Klein
Presented by Derrick O’Keefe

The Tipping Point
by Malcolm Gladwell
Presented by Ibi Kaslik

Dark Age Ahead
by Jane Jacobs
Presented by Suanne Kelman

Blood and Belonging:
Journeys into the New Nationalism
by Michael Ignatieff
Presented by Nahlah Ayed

The Inconvenient Indian
by Thomas King
Presented by Lee Maracle

A Secular Age
by Charles Taylor
Presented by David Cayley