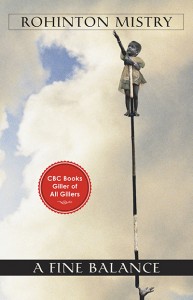 Rohinton Mistry’s novel, A Fine Balance, is a heartwrenching read, a story of horrors and the unlikely friendships that survive them. The novel is a reminder that there are moments where life can be beautiful even in the most appalling of circumstances.

I first read this book soon after moving to Canada. It was a nostalgic journey to Mumbai, the city of my birth, and I often say that it took a Canadian writer to teach me about the history of my first home. Mistry paints an evocative picture of the Emergency Rule in India, a time in the mid 1970s when civil liberties were extensively curbed in the name of wiping out corruption.

It’s in this milieu that we meet the endearing characters Mistry paints for us: two tailors who have managed to climb up the caste system—no easy feat—to their current position, leaving village life with hopes of opportunity in the big city, a feisty and beautiful young widow determined to hang on to her independence, and a young man from an idyllic mountain town whose sheltered life thus far makes the brutal realities of life in the big city difficult to bear.

These characters and others navigate India in trying political times, and its harshness, humanity and beautiful writing made A Fine Balance celebrated the world over. It is a Giller Prize and Commonwealth Writers Prize winner, and a Booker Prize nominee, among other accolades. But its greatest acclaim came from its readers, who were drawn into a book that showcased the brutal beauty of life in India.

Mistry’s depictions of Mumbai painted such a vivid picture of the city that I could almost smell it. But you don’t have to be born in Mumbai to see the city in your mind: millions of readers from around the world were transported there for the first time thanks to the novel. They embraced the complicated beauty and strange simplicity that manage to coexist in India, the same way that such a moral society is also rife with corruption.

A Fine Balance was also one of the first Canadian books to bring about a dialogue in what Canadian writing was: the book was not set in Canada, and had no “CanCon” so to speak. Yet it was intrinsically Canadian because the author was a Canadian. This brought about a conversation that still continues today: what is a Canadian book?

Part of this conversation, dear reader, is the fact that we as Canadians are a rich country, in many ways not just because of where we are, but because of where we have come from and who we have been. Canadian literature is richer for Mistry’s novel not just because it’s beautifully written and universally acclaimed, but also because it opens up a larger conversation about what Canadian writing is and who we, as Canadians, are. It shows us, a country that can sometimes be a little too self-congratulatory about our rankings on “best places to live” lists, that happiness and love and friendship and laughter can exist in the most dismal of circumstances, that there is life beyond the relative perfection of our shores.

Rashi Khilnani
Rashi Khilnani is a journalist, consultant and tireless advocate of Canadian literature. She is the founder of Welcoming Words, an organization connecting newcomers with books by Canadian authors.