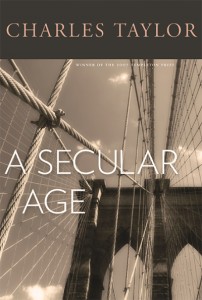 Outstanding among many good fortunes I enjoyed during a long career at CBC Radio’s Ideas was the chance to work with Charles Taylor on his 1991 Massey Lectures. I remember that when it came time to record, he amazed me by saying that he would like to deliver them extemporaneously, from notes, rather than reading them, as his many illustrious predecessors had done. I was incredulous, but he insisted that he could do it, and that he very much wanted to give his lectures the freshness and immediacy that this would impart. He was as good as his word and the resulting lectures were lively, colloquial and cogent.

Born into a bilingual family in Montreal in 1931—his father a transplanted Torontonian, his mother from an old Quebec family—Taylor was accustomed from childhood to a situation spanning two sometimes embattled communities.  When he took up the study of philosophy at Oxford, he found his first great philosophical inspiration in Maurice Merleau Ponty’s La Phénoménologie de la Perception, a book his analytically oriented professors considered closer to poetry than philosophy.  When the analytic philosophers met the French phenomenologists, including Merleau-Ponty, for a philosophical summit in 1958, Taylor was the man in the middle—a bridge over which nothing passed, during what he described to me as “three days of complete non-communication.” These stand-offs recurred in his life, from the independence referenda in Quebec to the controversy over the accommodation of cultural minorities in Quebec that led to the peace-making commission he co-chaired with Gérard Bouchard.

He once said to me his goal in philosophy was to refute the prevalent notion that we know the world only through “the ideas we have in our minds,” rather than our active, practical embodied engagement with things. Again and again he has tried to build bridges: between Anglo-American and continental philosophy; between modernism and anti-modernism; between humanism and religion.

A Secular Age, published in 2007, shows Taylor at his best. The book is generously proportioned at 874 pages, but also generously argued, in the affable, expansive and accessible style that has always been his hallmark. Taylor convincingly rejects what he calls the “subtraction story” which has defined many past accounts of secularization. In such accounts the secular is taken for granted as something that is always there, waiting to be revealed. Take away religion and there it is. Taylor treats the secular as the child of religion, the outcome of a lengthy and involved “mutation” of Latin Christendom, which began with the movement to reform the Church in the high Middle Ages and then grew into the modern project of remaking society as a whole. Secular society begins, in other words, as an attempt to make Christians more Christian, and only gradually turns against Christianity as the church comes to seem an obstacle to further progress. Two conclusions are notable. The first is that “our past is sedimented in our present” meaning we can’t know who we are unless we know what Taylor’s book wants to tell us: where we have come from. The second is that, with secularization, what Taylor calls “the conditions of belief” have changed for everyone, believe and non-believer. All live on a common ground, and dialogue is therefore possible.

A Secular Age is an immense achievement, as has already been widely recognized. It won Taylor the lucrative Templeton Prize and has been more widely discussed throughout the world than any other Canadian book of its time that I can recall. I think it provides a firm, spacious and humane foundation for future discussions of religion and secularity.

David Cayley
David Cayley was a radio documentarian for CBC Radio’s Ideas for more than 30 years. His most recent book is The Rivers North of the Future: The Testament of Ivan Illich (House of Anansi Press, 2005).