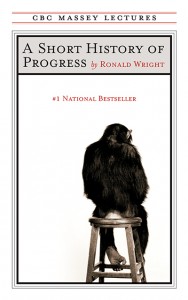 Environmental anxieties had already turned apocalyptic by the time A Short History of Progress appeared in 2004. Irrevocable planet abuse, slow and steady and requiring a keen eye to track, had finally supplanted the bright flash of nuclear self-immolation, a grim new species of worry for a new millennium. Even so, 9/11 and the invasion of Iraq deflected attentions, in particular during the period when so-called “civilizational conflict” seemed to apply a patina of universality to those events.  It could be confusing.

For many Canadians, Ronald Wright’s Massey Lectures helped clear the fog of war to show the true battlefield of our century—the very planet we occupy. Better, the lectures and book laid out the terms of engagement with a startling cross of anthropological dispassion and Old Testament prophesy. Simply, alarmingly, the battle was Us vs Us, our rapacious appetites and headlong drive to run our experiments in civilization into the ground.

Rise and fall and rise again?  Here was the scary twist to the history-repeating-itself tale.  This time around, Wright warned, no one, including the innocent earth, would get out of the conflict alive. A Short History of Progress first takes the reader by the hand for a gentlemanly walk through the “progress trap” pattern of civilizational history. Then it abruptly releases us into the end-of-pattern trajectory of our current unfolding catastrophe, a possible future of “chaos and collapse that will dwarf all the dark ages of the past.”

If that last phrase—which appears in the second to final sentence in the final lecture—does indeed lean more toward Book of Revelation than Book of Argument, so be it.  Wright certainly hoped to plant a few seeds of grave concern in the hope they would grow into commonplace ideas. For his popularizing of the “progress trap” alone, a nifty distillation of our fixation on one way of being in the world, the cultural legacy of A Short History of Progress would be secure.

A quiet source of authority for Ronald Wright the historian and anthropologist is Ronald Wright the novelist, most notably author of A Scientific Romance, published in 1997. Novels are the news that stay the news because they tell the story that stays the story.   That would be, once again, about Us vs Us, and if you believe the tale told in A Scientific Romance—or, for that matter, in David Mitchell’s Cloud Atlas or Margaret Atwood’s Oryx & Crake, comrades in the early new millennium dystopian fiction cadre—there is no happy ending up ahead.

But A Short History of Progress isn’t the Massey Lecture version of a droning barstool sermon of gloom. Quite the opposite. Wright is much more than a gentleman pessimist. He is erudite and witty, never pompous or boring, and forever inclined to gently encourage rather than just severely scold. Above all, he is a superb writer, clean and crisp and happy to generate sentences with old-fashioned locomotion.

Hardly a surprise that A Short History of Progress was a publishing success. (The copy I recently re-read is a 14th reprinting.) It strikes this reader as the perfect Massey Lecture. The subject is at once urgent and timeless, the themes are broad and serious but not esoteric, and the delivery is confident, accessible and purposeful in its provocations, especially the questions it asks. Most important, the thinking is original and unexpected while unfolding in the challenging “real time” of public performance, of thoughts being crafted to share aloud.

None of these are small achievements. All will ensure the book continues to be read for years, decades—even centuries, should we take that “last chance to get the future right” Ronald Wright offers in his closing sentence—to come.