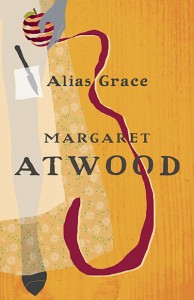 After the jury for the 1996 Giller Prize—composed of Bonnie Burnard, Carol Shields and me—had read the more than 100 books submitted, we went through all our deliberations, finally and unanimously declaring Margaret Atwood’s Alias Grace the best volume of fiction published that year.

Her ninth novel and her first to be set solidly in the past, Alias Grace marked Atwood’s return to Victorian England, the subject of her doctoral dissertation at Harvard University. During this time she read Susanna Moodie’s two autobiographical volumes, Roughing It in the Bush: Or, Life in Canada (1852) and Life in the Clearings Versus the Bush (1853), in Widener Library; they disappointed her: “a patina of gentility that offended my young soul.” But they haunted her, and she published The Journals of Susanna Moodie (1970), meditations on pioneer life whose source was less in Moodie’s words than in the words Moodie did not find. She wrote a television script, The Servant Girl (1974), about the convicted murderess Grace Marks, based on a story in Life in the Clearings. And she published a history textbook, Days of the Rebels 1815/1840, which used Moodie’s two volumes as sources.

In Alias Grace, Atwood returned to Grace Marks’s story in order to correct Moodie’s faulty version. One of the most notorious Canadian women of the 1840s, Grace, a young servant girl, was convicted of murder at the age of 16; her sentence was commuted from death by hanging to life imprisonment at the Provincial Penitentiary in Kingston. In 1872 she was granted a pardon and left for New York State. Moodie herself visited Grace at the Penitentiary and at the Lunatic Asylum in Toronto, writing her fabricated account of their meetings. “Moodie said at the outset of her account that she was writing Grace Marks’s story from memory, and as it turns out, her memory was no better than most,” commented Atwood. “She got the location wrong, and the names of some of the participants, just for starters. Not only that, the actual story was much more problematic, although less neatly dramatic, than the one Moodie had told.”

For her retelling of Grace’s story, Atwood did not alter any known facts, though the written accounts contradict one another so much that few facts are unequivocally known. When in doubt, she chose the most likely possibility while still accommodating all feasible possibilities. “Where mere hints and outright gaps exist in the records,” Atwood reflected, “I have felt free to invent.”

The result is Alias Grace, a novel that uses details of prison and asylum life (drawn from available records, letters and newspaper articles), the new theories of mental illness of the mid-19th century, and Atwood’s astonishing knowledge of mesmerism and spiritualism of the Victorian period, to present a vivid, factually accurate and apparently true account of Grace Marks in her time. The book itself is mesmerizing, a novel that appears to be non-fiction.

Alias Grace went on to win Italy’s Premio Mondello Award and an Award of Merit from Heritage Ontario. It was also shortlisted for the Governor General’s Award, the Booker Prize, the Orange Prize and the International IMPAC Dublin Literary Award. Now, 20 years later, Sarah Polley is making a six-part mini-series for television of her own adaptation of the novel.

The Giller Prize—back in 1996—was the first acknowledgement of the novel’s singular stature.

David Staines
David Staines is a literary critic, writer, editor and
professor of English at the University of Ottawa.