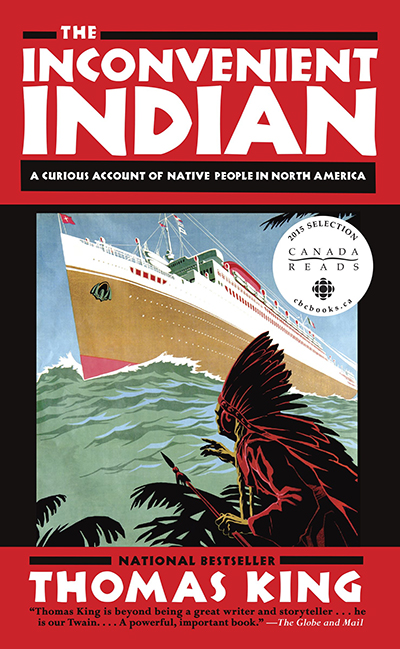 I am a contemporary of Tom King’s, an indigenous writer and educator and close enough to his age bracket to be careful of today’s health hazards. We also have a similar journey. King helped a group of us launch the En’owkin writing school that has produced some very stellar Indigenous authors. We have strong connections to indigenous people in general and in their struggle for justice in particular. We have shared podiums at writer’s festivals and become friends over the years. I have always enjoyed King’s books. Writers are often avid readers and Mr. King is among my favourite authors, indigenous or otherwise.

I attended the Writers’ Trust book awards ceremony in which The Inconvenient Indian was shortlisted but did not win. I thought it should have won. Tom King in his usual dignified way accepted the results with grace and alacrity. My son, actor Sid Bobb, read for King’s work that evening. He felt honoured to be asked. I was neither graceful nor did I do much smiling about the result. (Happily, the book did win the B.C. National Award for non-fiction and the Charles Taylor Prize). The Inconvenient Indian is a tremendous work of historical research, written with painstaking accuracy and by an author with a generous attitude. Like many non-Indians who point out the colonial elephant in the room, King’s “beautiful anger” was referenced. Tom King is not an angry man, but he is definitely one of colonialism’s most inconvenient Indians. The assumption is that if the author is Indian and he points out the colonial elephant in the room, he is ipso facto angry. I believe King is aware that those who cannot help validating the colonial history as a nation-building project will not select a book like The Inconvenient Indian. The book points out over and over that “the white man wants our land,” that living past our due date is inconvenient. He verifies his words with historical data, completely ignored by those who tout the myth of nation building in this country.

We are not a threat to anyone, being such a small population, all but completely obliterated by colonial force and history, so we become inconvenient. The title itself rankles. It ruffles the feathers of a Canada that considers itself both polite and of course “better than the Americans” on all of the colonial score cards. The Inconvenient Indian dispels this myth of both courtesy and holier-than-thou attitude in this country and King does so not with “beautiful anger” but with great humour. His sense of humour has always been his sharpest weapon in a very large intellectual arsenal. It is not a weapon that is used to destroy any human being, but to cut through the mythology of those who uphold the colonial order. It continues to surprise me that we have such intellectual giants among us, still standing, still speaking, still adhering stubbornly to truths that are now self-evident. The Inconvenient Indian is the one book that  shows the very core and heart of colonialism on this continent and as such is a must-read.

Lee Maracle
Lee Maracle is a poet and author. She teaches indigenous studies at the University of Toronto. Her most recent novel is Celia’s Song (Cormorant Books, 2014).