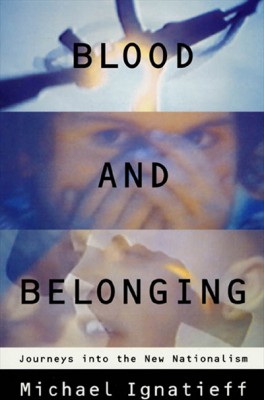 Long before his disastrous bid to lead Canada, Michael Ignatieff embarked on what was arguably an even more ambitious endeavour: the diagnosis of the rise of a new nationalism that incongruously seemed to know no borders.

The result was Blood and Belonging: Journeys into the New Nationalism, an award-winning book (and documentary television series) that gave shape to the pandemonium unleashed by the (re)emergence of ethnic nationalism as the “key language of our age” in several corners of a changing world; crucially, one of those corners was in Canada, and the diagnosis was dire.

The book is based on a series of journeys in which Ignatieff—an unabashed champion of the more inclusive civic nationalism—explained and personalized a darker nationalist quest that he tells us is still, at its core, a quest for belonging.

Somewhere between Tito’s grave, Kiev’s Kreschatik boulevard and the devastated Kurdish town of Halabja, we learned about the warlords, the guns, the vengeance and the “deeply emotional” connections to family graves—and language. Along the way, we, in 1993, understood they were all somehow connected in a way we hadn’t considered before and it helped make sense of things in the post-Soviet world.

Noting the common themes in rising nationalist sentiment in wildly divergent places is one feat; credibly putting them under an overarching umbrella is even more challenging. Ignatieff attempted both, all the while acknowledging that nationalism is “not one thing in many disguises, but many things in many disguises.”

To be sure, what really stitched together the places Ignatieff chose to highlight was mostly his own life journey, which began in Canada but meandered through the United States, United Kingdom, France and well beyond, where he travelled as the son of a diplomat and, later, a university student and journalist.

A self-described “child of the Cold War,” Ignatieff was then an authentic if opinionated guide into these immensely complicated places, with the depth of knowledge and connections that allowed him to credibly inject himself into their stories while still easily picking out the common threads.

As a bona fide, self-described “cosmopolitan,” he could also speak for the disappointment of many cosmopolitans then in the world’s unwavering failure to move beyond “nationalism, tribalism and provincial confines of the identities inscribed in our passports.” It is a disappointment that surely resonates and lingers among cosmopolitans today. This book must have been—is—painful but compelling reading.

Though the various stories demonstrate Ignatieff’s intricate understanding of the immensely complicated history and political reality of the places he visited, it is his journalistic approach that makes the book so powerful and effective, even today: the get-in-the-car-and-go approach; and the classic tactic of carefully and repeatedly chiselling a small story—a statue, a president, a café, or a town—to get at the larger one.

All of it contributed to making Blood and Belonging a crucial meditation on the roots of ethnic nationalism—and one that remains relevant as Europe once again witnesses a spike in nationalist sentiments—from Austria, and Germany to the United Kingdom and beyond.

What made the book crucial in Canada, however, was the inclusion of Quebec.

Quebec’s nationalism, Ignatieff told us, is the one he knew best. And there was Quebec, the chapter sandwiched between Ukraine and Kurdistan, with Canada listed alongside India and Northern Ireland as an example of a place where “ethnic nationalism flourishes within states formally committed to civic democracy,” and where such full inclusion did nothing to abate nationalist desires. Federalism like Canada’s, he declared, was in trouble.

It is in this exceptionally frank chapter that one grasps why this book mattered so much then, and why Ignatieff warned Canada could die. Those were fractious times in the “loveless marriage” of Quebec and English Canada. Meech Lake had failed, and Quebecers voted that year to send dozens of Bloc Québécois members of Parliament to Ottawa.

The book’s insight into the secessionist movement was timely and revelatory; its relevance to the Canadian conversation, just two years before Quebec’s 1995 sovereignty referendum cannot be overstated. Nor can it be entirely discounted should that conversation arise again.

Nahlah Ayed
Nahlah Ayed is the London-based foreign correspondent for CBC’s The National.