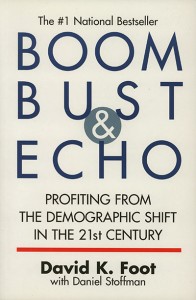 In the mid 1990s, my friend John Macfarlane, a publisher and editor encouraged me to submit a proposal for a book about what survey research was revealing about social change in Canada. After some dithering I eventually submitted an outline, but I was too late: John had already committed to another author whose planned book about big-picture social change seemed too similar to my own. It turned out that the other author was a University of Toronto academic named David Foot, who went on to produce (with journalist Daniel Stoffman) Boom, Bust and Echo: How to Profit from the Coming Demographic Shift. John wisely stuck to his deal with Foot, and was duly rewarded: Boom, Bust and Echo sold over 250,000 hard cover copies and remained on the bestseller list for two years.

Foot introduced the reading public to economic demography. The book was initially aimed at a business audience of planners and marketers, but it turned out to have wide appeal among a general readership that wanted to understand its society and how it was changing. Foot claimed that demography explained two-thirds of everything and that statistical science is the most powerful tool for understanding the past and forecasting the future. Who could resist looking into the crystal ball?

Before Boom, Bust and Echo, books about Canada were mainly about its history, economics and politics, specifically the leaders and elites who supposedly drove events. Boom, Bust and Echo was about all Canadians, not just the best, brightest, richest and most powerful, but the power of all of us together. In Foot’s analysis, Canadians at large were at least as interesting as their leaders—maybe more so—and their decisions and behaviours as workers, consumers and citizens deserved serious attention.

Although few fully realized it at the time, the mid 1990s were a particularly perilous time to publish a book with any ambitions about anticipating the future, no matter how well the author’s projections were grounded in data and sound analysis. The internet was just beginning to insinuate itself into every aspect of our lives, and what it might mean to live in a networked world was just barely coming into view. Foot’s book did not discuss the internet in depth (he did mention that boomers were beginning to get with the program, catching up to their “echo” kids), but his ambitious analysis in some ways anticipated the kinds of conversations we would be having in the decades ahead. Technology would soon change the way we thought about large groups of ordinary people: what we could know about them, what we could predict about their preferences and behaviour, how we might change processes and systems in response to what the data revealed to us.

Years before our devices and our software would push us all toward this kind of thinking—before mainstream magazines would have data journalists on staff, or hobbyists would use open data portals to helpfully “hack” the way their fellow citizens were using the city—David Foot was pulling the lens of our thinking back, way back, to help us see ourselves in new ways. Importantly, he gave us an illuminating view from 35,000 feet but was equally savvy at street level, parsing the implications of big-picture demographic trends for real estate markets, transit systems and grocery sales.

Not everything Foot predicted came to pass but enough did to give demography new potency—even some intellectual sex appeal. Boom, Bust and Echo changed the way we talked about ourselves, each other and our country.

Michael Adams
Michael Adams is the president of the Environics group of companies, which he co-founded in 1970. He is the author of six books, most recently Unlikely Utopia: The Surprising Triumph of Canadian Pluralism (Penguin Canada (2008).