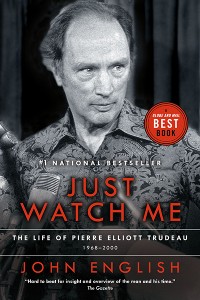 In one of the myriad press accounts marking the tenth anniversary of Pierre Elliott Trudeau’s death, in 2010, University of Toronto historian Robert Bothwell observes that his young students have only a vague impression of who Trudeau is: “a name and an airport.”

Bothwell’s statement bothered me then; it bothers me still. Although six years further on, with another Trudeau in the Prime Minister’s Office, the name carries more recognition with Canada’s young, it is the question of what Pierre Trudeau’s meaning is—or should be—to the huge millennial generation that makes this meticulous and beautifully written two-volume Trudeau biography so influential.

Why? Because the man, whatever his inadequacies at political leadership, forever blew us out of the stagnant pond of provincialism.

No one better than John English has captured how that came to be. No one has gotten more inside Pierre Trudeau’s head and soul.

English, a much-honoured academic historian, officer of the Order of Canada and former Liberal member of Parliament, wrote the biography at the request of the Trudeau family. To execute the task, he was given access to Trudeau’s unexpected cornucopia of personal papers. Canada’s 15th (and third-longest serving) prime minister may have been accused of being too lazy to write a decent memoir but he was a pack rat when it came to the paper trail of his life. He saved everything. He made notes on everything. Which is a very good thing, because he eternally changed the cultural narrative of his fellow Canadians.

Under subsequent prime ministers, we could return to the collective state of being forgettable (or worse), but never again—certainly not with the record of English’s biography—could we forget that we had once been something more, an emotionally richer, more elegant, classier, more sophisticated and intelligent place. Pierre Trudeau established before the world that we were capable of being interesting.

He was determined from youth to be the perfect human being, intellectually, spiritually, culturally, physically. Before he was into his twenties, as English records, Trudeau writes: “I must become a great man.” He mythologically canoed the country’s great rivers, backpacked and motorcycled around the planet, studied at the world’s great universities, was flamboyant (for heaven’s sake) with exquisite taste.

“Because Trudeau had style, we had pride,” says English. And because he also was sweetly and a bit clumsily Canadian, as English writes, he had troubles losing his virginity until he was going on 30 and then went on to date some of the most engaging women in the world.

In the first volume of his biography, Citizen of the World, English presents a young man setting out to find rules that he can live by in a world in the throes of mayhem and indecipherable change. He makes his own rules and follows them with iron discipline. He arrives at a deep spiritual understanding that serves as a light to brighten the darkness around him.

The second volume, Just Watch Me, is the story of a prime minister who wears a rose in his lapel as hippies wore flowers in their hair. He becomes, for many young Canadians, a light—that metaphor again—to illuminate a new country of social justice and multicultural harmony. The world comes to know Canada under Trudeau as neither a colony nor second rate, but as an articulate and intelligent voice.

When Trudeau spoke, said the political author Peter C. Newman, “the whole
house of clichés constructed by generations of politicians [was] demolished.” Columnist Richard Gwyn called him “our… combat warrior,” which both his foes and followers understood. And finally pollster Michael Adams: “He [was] the last real coherent articulator of a Canadian vision of the country, of a Canada that works, that had ideals.”

Michael Valpy
Michael Valpy is a journalist and author. Through a long career at The Globe and Mail, he served as foreign correspondent, national political columnist, member of the editorial board and deputy managing editor before leaving to teach in 2010. He is a senior fellow at Massey College, University of Toronto.