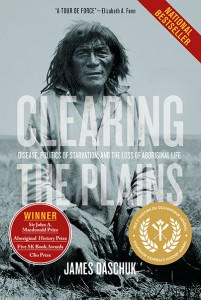 The problem with secrets is that they resist staying secrets—especially when violence is involved. And, while a secret may try to remain in the whispers, it takes a courageous soul to loudly pronounce the truth and identify how the masses are accomplices—and now carry the responsibility to forge reconciliation. This is why James Daschuk’s Clearing the Plains: Disease, Politics of Starvation and the Loss of Aboriginal Life should be read by every Canadian and taught in every school.

In the book, Daschuk presents an intricate examination of how Canada cleared the plains coldly and opportunistically, taking advantage of a famine caused by the loss of bison populations, due to the flooding of Nakota, Dakota, Nehiyawak, Niitsitapi and Anishinaabe territories by settlers. Methodically, using draconian legislation regarding Indians and starvation, Canadian leaders coerced indigenous leaders into signing treaties and acquiescing to federal control—all in an attempt to exterminate indigenous peoples from the national consciousness. In other words, Indians were forcibly and willfully manipulated, removed, and murdered for the sake of “progress.” None of this is an overstatement: it’s all there in the evidence Daschuk unearths in deft research and prose.

The most remarkable aspect of Clearing the Plains is the narrative arc of the book. He draws a direct line connecting 19th century Canadian Indian policy, Sir John A. Macdonald’s railroad, western settlement, Canada’s economic foundation and territorial theft of indigenous communities, ethnic cleansing and genocide. The conclusion of this story is that indigenous peoples now experience, a century and a half later, dire circumstances due to these events: the lowest life expectancy, the greatest amount of poverty and ostracization, and the highest amount of racism and violence. Simply put, the situation indigenous communities face today is the result of an elaborate and extensive plan in which every Canadian is culpable. Throughout the 19th century, Canada pursued a “state-
sponsored attack on indigenous communities,” Daschuk states, that continues to “haunt us as a nation still.”

In 340 pages Daschuk’s Clearing the Plains does more to tell the true story of Canada’s history than the entirety of Eurocentric pioneer narratives, “award-winning” textbooks, and self-congratulatory encyclopedias that flood bookstores, libraries and classrooms across this country. Daschuk announces the secret that indigenous peoples have been telling all along but Canadians weren’t ready to hear (frankly, until one of their own said it): Canada’s settlement, growth and economy was not a simple, earned and positivistic set of events but a cold, methodical and exploitative plan built on sacrifices by and theft from indigenous peoples.

As Prime Minister Justin Trudeau has stated many times now: reconciliation with indigenous peoples is the most pressing, important and critical issue of our time. The dire situations indigenous peoples face in their communities and the country’s cities cannot be ignored any longer. Reconciliation is everyone’s business. How we step into a future together will determine the future of our children.

Daschuk’s work demands that we question every one of Canada’s stories; who are its heroes, why things happened how they did and how could they have occurred differently. At a moment before Canada celebrates its 150th birthday—when we are sure to hear the same-old half-truths about progress, civilization and the tragedies of indigenous inferiority—this is the most important national narrative of all. Daschuk’s Clearing the Plains demands that we tell a better story about Canada.

Ironically winning the 2014 Sir John A. Macdonald Prize for the best scholarly book in Canadian history (awarded by the Canadian Historical Association), this book has changed the field of historical narratives of Canada, setting a new standard and vision for the country.

Now that we know Daschuk’s work, however, we must change. Change begins with the narratives we tell ourselves. If we change our stories, enriching them with not only what we hope to be but who we really are, we cannot help but become a better community. We will not only learn about ourselves but become better prepared for the immense challenge of living peacefully and meaningfully. And, if we work hard enough, we might even see reconciliation one day.

We will definitely know our secrets. Maybe even the truth.

Niigaan Sinclair
Niigaan Sinclair is Anishinaabe and department head of Native Studies at the University of Manitoba. He is an award-winning speaker, writer, and editor of such books as The Winter We Danced: Voices from the Past, the Future, and the Idle No More Movement (ARP Press, 2014).