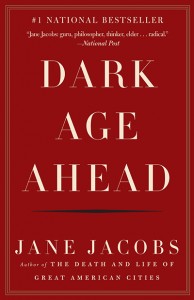 At 88, Jane Jacobs didn’t have to keep writing. She had accomplished more than enough for one lifetime, a self-educated woman who brought out her first book—on the U.S. constitution—at the age of 25. Her book The Death and Life of Great American Cities (1961) had an immeasurable impact on urban planning and life.  She had enjoyed impressive success as an activist, helping to defeat Robert Moses’s plan for an expressway that would have destroyed New York City’s SoHo and Little Italy. When you walk through those vibrant showcases now, you can see how right Jacobs was—although they house wealthy professionals these days, not blue-collar workers. For the past decade, Jane’s Walks, a weekend program, have celebrated her life and work, first in Toronto and now in cities around the world.

When Jacobs, by then living in Toronto and instrumental in blocking the Spadina Expressway, published Dark Age Ahead in 2004, hostile reviewers called her a Cassandra. They had forgotten the key element of Cassandra’s curse: no one believed her, but her prophecies always came true.

Jacobs’s last book is a stark warning not only that civilizations die, but that their hard-earned knowledge can die with them: “Writing, printing, and the internet give a false sense of security about the permanence of culture.” More than two decades later, that sense of security may be eroding. This may explain the wild popularity of zombies and post-apocalyptic societies at all levels of our society, from video games to literary fiction.

Jacobs isolated five rather surprising “jeopardized” pillars of our culture: community and family; higher education; science and science-based technology; “taxes and governmental powers directly in touch with needs and possibilities”; “self-policing by the learned professions.”

You could quibble with some of those choices. She acknowledged even then that the environment, racism and income disparity seemed more urgent. Her reasoning is at times idiosyncratic. It gives a reader pause when she blames the decline of the family unit in the developed world on economics and the automobile. Certainly the rise of the single-person household, not just in North America and Europe, but now in Japan, seems rooted less in number crunching about the cost of raising children than in the triumph of consumerism and individualism. Still, it would have cheered Jacobs to know that many young people today have no desire to own cars, or even to know how to drive them.

In fact—in a book dismissed as “extremely sloppy” by the New York Times—Jacobs appears to have had second sight: she predicted the U.S. housing collapse. The world—including urban planners and healthcare professionals—has now caught up with her revolt against the automobile. Our birth rates have spread her alarm about the family to our political leaders. Her concerns about ethics in business and the professions seem eerily prescient. Above all, today it seems astonishing that her chapter “Science Abandoned” predated the Harper government.

For a retired academic, the most provocative and dispiriting section of the book remains Jacobs’s analysis of education. I don’t think anyone could argue now against her statement: that “Credentialing, not educating, has become the primary business of North American universities.”

I can’t argue that this is Jacobs’s best or most influential book. Its frequent leaps of logic and often eccentric outlook go a long way to explaining the originally negative reviews. But the jagged quality of its line of thought seems to me now to be a strength; it snags the reader’s mind and forces her to think. Above all, at a time of unnerving violence and political recklessness in so many places around the world, it serves as a reminder that even a robust civilization can, without vigilance and action, vanish into ruins as hauntingly empty as Petra and Palmyra.

Suanne Kelman
Suanne Kelman is professor emerita of the School of Journalism at Ryerson University. She is the author of All in the Family: A Cultural History of Family Life (Viking, 1998).