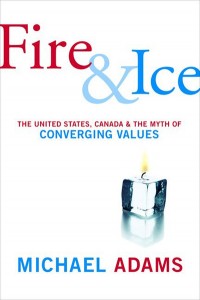 Fire and Ice exploded onto the popular and academic scene at a delicate moment in the Canadian psyche. In the early 2000s, Canadians were in the throes of a greater identity crisis than usual. More than a decade of economic continentalization and neoliberal cuts had made Canadians wonder if they were becoming—as so many had prognosticated during the bruising free trade debates of the late 1980s—culturally assimilated by the United States, our values no different from those of our southern neighbour. Then, following 9/11, we were “all Americans,” and of course, during the run-up to the second Iraq War, we were either “with them or against them.” It was an emotional time for Canadians.

Into this political, economic, cultural and psychological maelstrom strode pollster Michael Adams. Adams, the head of Environics, confidently, controversially and counterintuitively told us that not only were the differences between Canadians and Americans real and significant, but they were also deepening. It was very un-Canadian, in a most Canadian way.

Adams told us something that was, in retrospect, hidden in plain sight. Using a raft of polling information (14,000 interviews across years of data gathering), he showed that the values of the two countries were indeed diverging: Americans were becoming increasingly attuned toward consumerism, violence, exclusion, patriarchy and racism; Canadians, on the other hand, were increasingly embracing pluralism, inclusion, openness and flexibility.

It was a heterodox argument that boosted both nationalist morale and infuriated a great many people. I remember well some of my more continentally minded academic colleagues huffily dismissing the book as “feel good propaganda,” which said to me that it had hit pretty close to home in a way that they couldn’t stomach. But Fire and Ice unquestionably had a wide impact, winning the 2004 Donner Prize as the best book on public policy, selling tens of thousands of copies (a real rarity given its data-heavy approach) and reshaping the way Canadians thought about themselves—here was actual evidence of the “cool Canada” that had graced the cover of The Economist
around the same time that the book was published.

More than a decade on, Adams’s conclusions seem even more prescient. Compare, for instance, the current most talked about political figures on either side of the border:  Donald Trump perfectly encapsulates the key traits that Fire and Ice saw as growing in America: “values of nihilism, aggression, fear of the other, and consumptive one-upmanship.” Justin Trudeau epitomizes the Canadian values that Adams saw clearly emerging in the early 2000s—though born in 1971, Trudeau is the millennial generation’s torch bearer in North America, embracing multiculturalism, diversity and liberal social and cultural mores (which, notwithstanding Trump, are also strongly present in America).

Somewhat ironically, the 2016 presidential election is a test of whether the United States is starting to become more like Canada or continues down the paranoid and violent path that Adams identified in 2003. After all, when it comes to values, they’re either with us or against us.