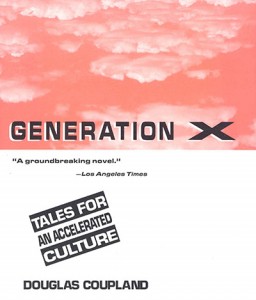 I have a first edition of Generation X, signed by Douglas Coupland. I bought my copy when I was 20, in 1991, when I was in the grips of Couplandmania, like every other 20-something I knew. My edition is not only signed and dated (September 14, 1991), but it contains an outline of Coupland’s handprint, as well as my own name, Adam, drawn in a little box, meant to resemble an entry on the periodic table. All of this happened at a bookstore in Montreal, where I was then going to college. I remember the evening very well.
The crowd was large. Coupland was late. He swanned in—I’m sorry, but that’s the verb that comes to mind—attended by friends, then announced he wouldn’t be reading from his book. Instead he would read a short excerpt by, if memory serves me, Margaret Drabble. Afterward, I was waiting near the front of the line to get my book signed when a woman, who I think was one of Coupland’s friends, asked him jokingly to sign her cleavage, which she then amply presented. He autographed it with a Sharpie. The whole exchange felt to me like a mockery of the entire event. I felt kind of stupid. I remember all this so well because I wanted so badly to be Douglas Coupland. We all did. He had done the thing that every young writer aspires to do. He had written a generation-defining—hell, a generation-naming—novel. He was, quite literally, the voice of his generation.

Becoming the voice of your generation is a kind of curse, both for a writer and a novel. Generation X exists now in cultural amber, more artifact than literature. People rarely ask, “Yes, but how was the writing in Generation X?” for the same reason people rarely ask, “Yes, but how was the music at Woodstock?” But here’s the answer: It’s very good. Generation X is an excellent novel. It exists proudly in the lineage of generation-defining novels along with The Sun Also Rises and On The Road. Yet it seems to have more in common with its antecedents than with anything that has come since. There has been no equivalent novel, or phenomenon, in the post-internet world. This is likely because the great, generation-defining, post-internet novel is being written, in a thousand tiny disconnected shards, on the internet, every day.

But if Generation X is ensconced as a relic, it deserves to be celebrated as a book. To read it today is to realize how artfully it both created and captured its moment and how prodigiously well suited Coupland was to the task. He possesses a voracious eye for observation and a ludicrous skill for aphorism. (The famous marginalia, full of coinages and portmanteaus, seems almost like a boast.) He chronicled a generation that didn’t yet know it was a generation—those marketing-saturated, message-averse post-boomers who were afflicted by a moral malaise and the millstone of their apparent overeducation. “I work from eight till five in front of a sperm-dissolving VDT performing abstract tasks that indirectly enslave the Third World,” is how one character, Dag, describes his life. For the record, no one in the ’90s actually talked this way. But everyone wished they talked this way.

Reading the book again, I’m reminded not of the phenomenon but of the feeling I had back then that this book had been written especially for me—which is, of course, the reliable mark of a lasting novel. And when I look at my own aging edition—you know exactly what it looks like; every edition of this book looks the same, with its band of clouds and its subtitle, “Tales For An Accelerated Culture,” in block letters, like the lingering handstamp from last night’s concert—I wonder if the handprint inside the front cover might actually be mine. Maybe Coupland traced my hand that night in the bookstore in Montreal, not his. Now that I think of it that seems right. So I put my hand inside it. It fits.

Adam Sternbergh
Adam Sternbergh is a contributing editor at New York Magazine and Vulture, and the former culture editor of the New York Times Magazine. His latest book is Near Enemy: A Spademan Novel (Crown, 2015).