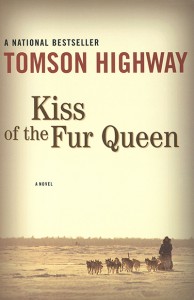 Published in 1998, Kiss of the Fur Queen topped the bestseller list for many weeks. It was a pioneering work, as it dealt with two subjects that up to that time were not widely spoken about: the abuses, both physical and sexual, that took place at the residential schools set up for First Nations children, and gay lifestyles and identities among First Nations people.This novel was among the first books to tackle such long-repressed and inflammatory subjects, particularly the residential schools abuses. That story has been unfolding in the eyes of the public for over a decade now, but it may fairly be said that Tomson Highway wrote the first chapter.

But why did this kind of activity seem so new, so unprecedented, in the 1980s? In the 1960s, there were hardly any works by First Nations poets, playwrights or fiction writers.The painter Norval Morrisseau had become known in the 1970s, but in literature the age of John Richardson’s Wacousta and Pauline Johnson’s narrative poetry was long gone. No one had arrived to fill that gap in written work by First Nations artists, and the residential schools system—dedicated to expunging anything “native” from the minds of the young—is certainly partly responsible. How can you write what you know if what you know is an erasure?Highway was no stranger to pioneering and innovation. He was early on the scene as a playwright—The Rez Sisters made a big splash in 1986, many other plays followed, and Highway was the artistic director of Native Earth Performing Arts from 1986 to 1992. These were risky ventures, and they cut a pathway that many others have followed.

It was Highway’s genius to tell the story of that erasure: what it was like to live through, what effects it had on those who suffered it, and how—despite that created and painful blank—older traditions, beliefs and long-familiar figures could still make their way back to the surface of consciousness. “The return of the repressed” is a psychological term, but now—in the early 21st century—it might as well also be a sociological-anthropological one, as many diverse groups and communities work busily at digging up what previous generations worked so hard to bury. Those who do the first unearthings are not always thanked. More often they may be criticized—they have spoken the unspeakable, they have mentioned the unmentionable, they have violated a code of silence. Also they have brought shame, for in these situations it may be blame that attaches to the perpetrators, but it is shame that attaches to the victims. So it is with rape, and these children were raped.

One of Highway’s points is that the theft or obliteration of a language is also the theft or obliteration of a whole way of viewing reality, for Cree has a gender-Kiss of the Fur Queen—with its glancing reference to that other well-known gay work, the 1985 Kiss of the Spider Woman—is the semi-autobiographical account of two Cree brothers, taken from their family and sent off to the abusive priests. It was the law that children had to go to schools, and when communities did not have schools, residential schools were the only choice open to them. The brothers’ names were changed and the process of forced erasure was begun. Luckily they had a guardian: the trickster deity, one of whose names is Weesageechak (from which the Grey Jay gets its northern nickname, “whiskeyjack”). This deity is genderless and can take any form it pleases. In Highway’s novel, for instance, it speaks as a fox, whereas in his two “rez” plays the name is Nanabush; male in one play, female in another.

It has taken over 20 years for Highway’s work to truly come into its time. It was well ahead of that time, but right now it is more relevant than ever.

Margaret Atwood
Margaret Atwood is the author of more than 35 books. Her most recent works are Hag-Seed: The Tempest Retold (Knopf, 2016) and her first graphic novel, Angel Catbird (Dark Horse Books, 2016).